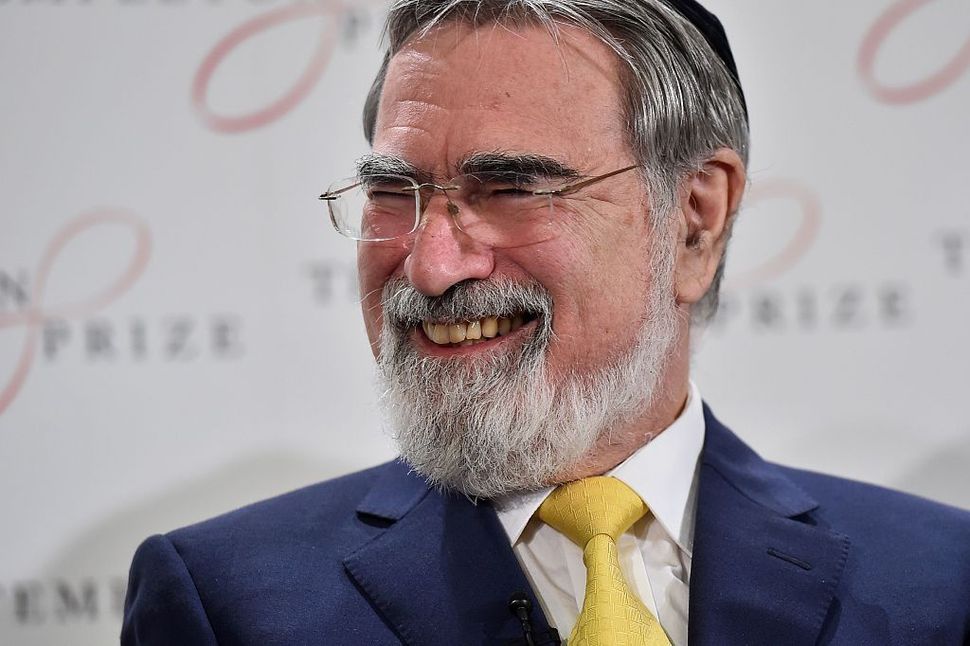 But as the day went on, I saw that many friends from the United Kingdom and the United States were posting on social media about the sorrow they felt at this loss, and about how deeply Rabbi Sacks had affected their lives.

There tends to be a disinterest in Israel toward figures and ideas that come from the Jewish Diaspora. Until I learned about Rabbi Sacks, I confess that, like most Israelis I know, I was not particularly aware of or interested in Jewish thinkers outside of my country. I spent a month in a monastery in Nepal learning about Buddhist ideas, but I had not spent even an hour trying to absorb something about the Jewish ideas from outside of Israel.

I was born, raised and educated in Israel, and I was active in organizations that dealt with Israeli and Jewish identity — yet I had never once heard of Rabbi Sacks. What was particularly unexpected was that most of the people who wrote about him were not Orthodox, but secular or traditional Jews like me. Some were not even Jewish. Was I missing out on something?

I planned to spend just a few minutes reading about Rabbi Sacks on Wikipedia, but instead I found myself watching a video in which discussed one of my favorite Leonard Cohen songs, “You Want It Darker.”

For an incredible 11 minutes and seconds, an elegant, bearded rabbi with a yellow tie and a British accent discussed the song — and poetry, Judaism, theology, international politics, Kabbalah, philosophy and popular culture contained within — with depth, grace and wit.

In the days that followed, I watched many hours of Rabbi Sacks’s lectures and read a number of his writings. The more I learned, the more I realized that the newspaper’s characterization was accurate. He was a highly influential figure, regularly meeting with world leaders and speaking to the world’s most respected forums.

But his importance was not just because of his global stature — it came directly from what he shared to the world with his teachings. He dealt with many of the burning issues of our time, from political polarization to fake news to social media addiction, offering a fresh and accessible perspective.

I cannot speak on behalf of all Israelis, but in my personal experience and environment, I think the lack of knowledge about Jewish thinkers and ideas in the Diaspora comes not from a lack of interest, but rather a false illusion that Jewish culture in Israel is like that in the rest of the world.

We tend to think that Judaism in Israel, the center of the Jewish world as we Israelis like to imagine, is similar to any other place. If there are small differences, one only needs to watch Adam Sandler’s latest film on Netflix or the episode of Friends on the Holiday Armadillo of Hanukkah to know almost everything there is to know about the experience of Jews in the Diaspora.

Rabbi Sacks did meet with senior figures in Israeli society over the years, but those meetings remained mostly symbolic events, drawing in attendees to see the “Senior Rabbi Sacks,” with little emphasis on Rabbi Sacks the great thinker and author. There are those who are now trying to bring Rabbi Sacks’ ideas to the Israeli public, such as Koren Publishers and the fantastic translator Tzur Erlich, who have brought some of Rabbi Sacks’s books into Hebrew. I still struggled to find one of his books in Tel Aviv, only finding a single copy after visiting eight bookstores.

Rabbi Sacks was aware of the gap between the recognition he received in the Diaspora and his relative anonymity in Israel. At an event the rabbi attended, held a few years ago in honor of the Hebrew translation of one of his books, he spoke in Hebrew and acknowledged, with characteristic humor, that his Hebrew was less than fluent, but that it was important to him to speak the language of the audience he so wanted to reach.

Maybe we Israelis are a bit too busy constantly looking for similarities instead of trying to learn and profit from the differences. I learned this lesson directly from Rabbi Sacks, who constantly sought out learning from new people and disciplines. I had never encountered a rabbi who seemed so rooted in his own Jewish values and identity and yet was so open to learning and talking about other spiritual traditions, other cultures and other ways of thinking.

As I delved deeper into Rabbi Sacks’s ideas, I realized that there was no contradiction in this, but that it was absolutely central to his thinking. The identity and story that you carry as an individual is not a barrier to appreciating other identities and stories — crucially, it can be the key. His universality did not come from erasing the differences between people and nations, but instead, from celebrating them.

It’s painful for me as an Israeli that such an original and brilliant Jewish thinker, such a great ambassador for Judaism, remains relatively unknown in my country, the only Jewish state in the world. Many Israelis have a feeling that dealing with questions of Jewish life identity are fundamentally religious questions, and therefore not relevant to the secular or traditional public. But I think this is exactly the lesson that Rabbi Sacks teaches, which is so relevant for Israelis — that the preoccupation of one’s cultural identity and roots is an integral part of the human experience.

I truly believe that a deeper examination of the differences between ourselves and others, as Rabbi Sacks teaches, will help Israelis better understand not only other cultures, but also the Jewish Diaspora and our own identity.

We Israelis think of Israel as a potential home for every Jew in the world, but we also usually assume that incoming olim will change themselves to accommodate Israel.

Rabbi Sacks understood that it was essential to be open to learning from other sources beyond Judaism, because the truth is not found only in one place. That is only one of many lessons that he can still teach us.

Iddo Gefen is the author of Jerusalem Beach (Astra House). He is based in Tel Aviv, and works in neurocognitive research at the Immersive Media & Cognition Group at the Sagol Brain Institute.