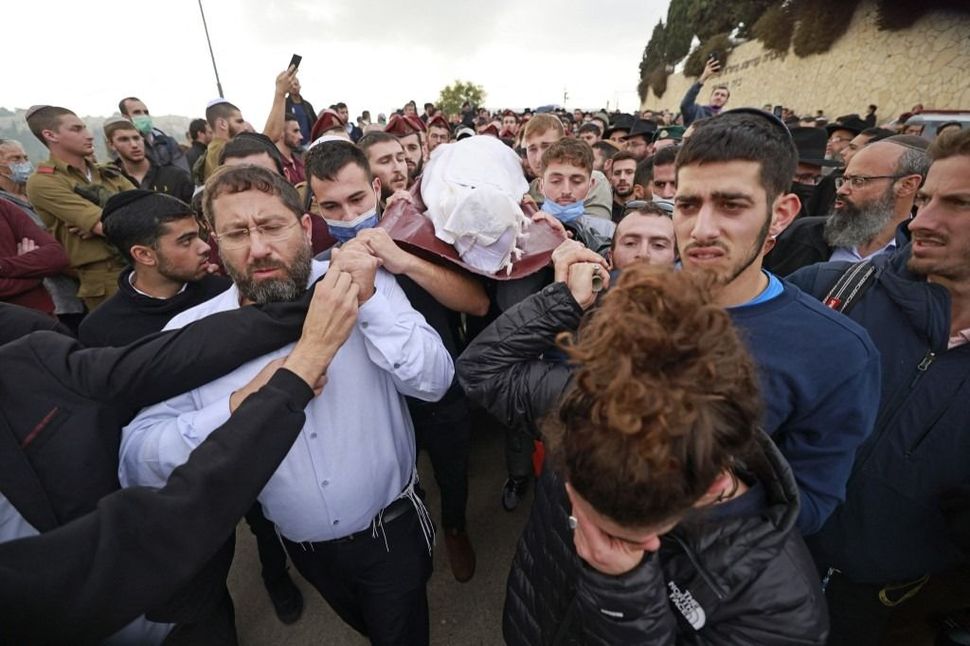 Mourners carry the body of 26-year-old Eliyahu Kay during his funeral in Jerusalem the day after he was killed by a Palestinian gunman in a terror attack, on Nov. 22, 2021. By Menahem Kahana/AFP

Israel is often reminded by its critics that its status quo is unsustainable. Like a procrastinator in shul at the end of Yom Kippur, time is running out for it to do the right thing: to withdraw from the territories, midwife a Palestinian state, dissolve itself into nonbeing. To figure out the problem of its own presence.

This weekend is a good reminder that the greatest threats to Israel are not its critics’ disapproval, but the intentions of its real-life foes. Defending the Jewish State is what brought Eliyahu ‘Eli’ Kay halfway around the world from South Africa to live in Israel, fight in the IDF, and tell its story as a tour guide in Jerusalem. He was murdered on his way to work on Nov. 21 by Fadi Abu Shkhaydam, a Palestinian member of Hamas who was also an educator. A colleague of Abu Shkhaydam’s reports that he “was the best teacher. He never cursed anyone, or called anyone a bad name, except the Jews, may God burn them.”

Israel used to have many more enemies than it does today. Peace treaties and the Abraham Accords have cut down the number of its explicit antagonisms. But it still has two major ones, whose capacity for violence are in fact connected not to what Israel does but what it is: Palestinian terrorism and Iranian aggression. With his violent actions, Abu Shkhaydam was enacting what has long been a core Palestinian commitment, shared by both the Palestinian Authority and Hamas: denying any Jewish connection to Israel and specifically to Jerusalem.

Kay’s death is not a symbol or metaphor, but a tragedy. However, to miss the reality that a tour guide who taught about the history of the Western Wall was murdered by someone whose sense of self and people is predicated on denying that very history is to be blind to the link between rejectionism and violence, rhetoric and a funeral. Each loss of life is devastating in its particulars, but this one is illuminating in the patterns it reveals: the toxicity of Palestinian ideology, the corruption of an educational system toward violent ends, the justification of violence and its post facto celebration. If Israel’s existence is a crime, then its accusers who bear all the guilt.

If Eli Kay was murdered because of the denial of Jewish history, then Iran is intent on canceling the Jewish future. Fresh reporting over the weekend reveals that despite Israel’s best efforts at sabotage, Iranian nuclear program is in hyperdrive: one source referred to it as “Iran’s Build Back Better Plan,” in reference to President Biden’s signature piece of legislation. All this is happening while members of the international community sip cocktails in the lobby of Vienna’s Grand Hotel, where negotiations on re-upping the 2015 JCPOA nuclear deal putter along.

With a new hard-line president in Tehran and Israel stepping up preparations for war, it feels like a moment of reckoning is close at hand. When it comes, it will have nothing to do with Israeli policy or practice. It will be to settle the fate of Jews in the Middle East. I wonder who will stand with Israel when the difficult decisions need to be made, and whether those who find explanations for the murder of one Jew will find rationalizations for the eradication of many more.

The link between Iran’s designs and the Palestinian terrorism that took Eli Kay’s life goes beyond the growing ascendancy of Hamas, Iran’s prize proxy, in Palestinian politics. The connection is bound up in a politics deeply motivated by antisemitism, where the two entities actively wish Jews harm. The problem is that both Hamas and Iran have the means to make that wish come true.

The tendency of American Jews to focus on Israel makes sense, because to pay the same attention to its enemies would involve a depressing assessment of where things stand. But sometimes changing the subject is necessary. Just as a trial requires both direct examination of one’s own witnesses and cross examination of hostile ones, so too must endless critics of Israel find room to acknowledge the indefensible speech and acts of those at its borders and beyond.

It is long past time to acknowledge that Israel’s imperfections do nothing to excuse the deep guilt of its enemies. The only things unsustainable about the status quo are the fervent wishes of those who would encourage Israel to end it in favor of something far worse. Israel is not its own worst enemy: its worst enemies are its worst enemies. The dangers it faces are not primarily of its own making: they are ones devised by those who relentlessly seek to do it harm.