Soup is good food, and other thoughts about how to survive the Omicron surge 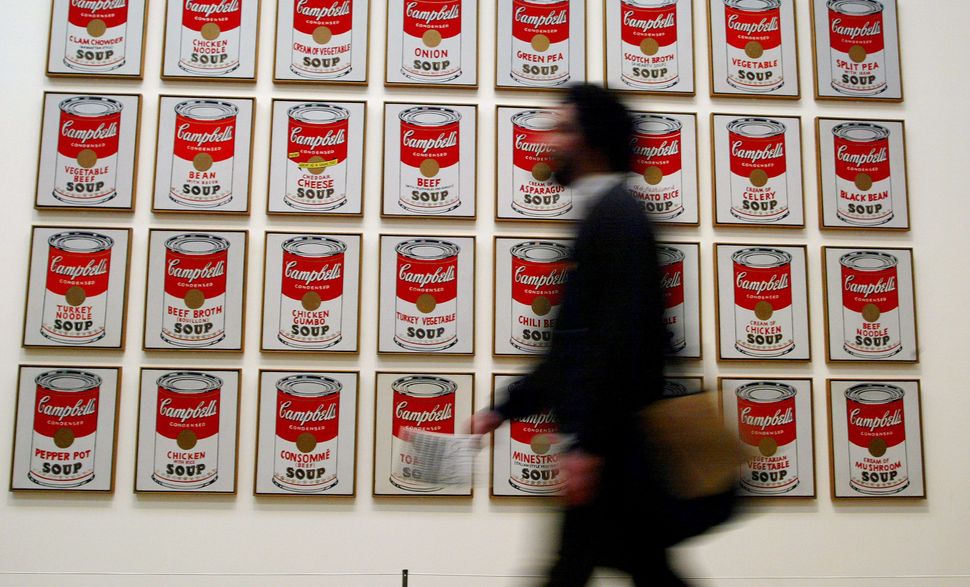 This column should be about New Year’s resolutions, but I haven’t made any — maybe because it feels more like March 677, 2020, than the dawn of some new era. Instead, I’ve been making soup.

Making soup and bringing some of it to friends with COVID. There are certainly enough of them. I’ve made two runs so far this week, one with two stops, and have a batch of roasted-red-pepper-and-tomato ready for delivery this afternoon, snow permitting.

Soup is a lot easier to make than resolutions, especially in these uncertain times. A lot easier to keep, too — I just ordered two dozen plastic quart containers that can go from freezer to microwave.

And the simple act of putting a few servings of soup in a bag and dropping it on the doorstep of someone doing a little worse than you are right now feels like something of a metaphor for this pandemic moment. We have learned how to maintain connections even in our isolation. We have more time at home to make stuff. We appreciate the little things — warmth, seasoning, generosity — a little more than we used to.

We don’t know what’s next — but at least we know in a deep way that we can’t know — and meanwhile, maybe a mug of lentil soup will make us feel a bit better about the now.

The great 12th century philosopher and doctor Maimonides hailed chicken soup as a remedy for all that ails you, borrowing from even earlier Chinese and Greek texts that praised its medicinal qualities.

Four hundred years later, French street vendors who touted their thick, cheap soup as a restorative elixir were the first to use the word “restaurant,” from the French verb restaurer — to restore.

Many cooks, doctors and scientists since have noted that soup can pack a lot of healthy ingredients into an easily digestible package, and that the very heat of a hearty bowlful can have health benefits. One food historian, Ken Albala of the University of the Pacific, thinks the intuitive appeal of soup-while-sick is more about nostalgia than nutrition.

“The idea of what convalescents should eat, it’s analogous to baby food,” he explained in an interview a decade ago. “It’s definitely a matter of comfort and going back to basics.”

I’m here to speak not just for the physical benefits of consuming soup, but for the psycho-emotional pluses of giving it away.

I am not a particularly virtuous or generous person. I do not donate a noteworthy number to charity, nor seize enough of the volunteering opportunities around me. But in my little corner of the world, I am becoming known as a person who is likely to show up with soup when you don’t even know you need it. And that makes me proud.

It makes me feel a little less helpless against the virus — and the hate — swirling endlessly everywhere to sauté an onion in some olive oil at the bottom of my Instant Pot. It distracts me from stressing over the relative risks and rewards of in-person vs. remote school to add vegetables and cumin and stock and salt. 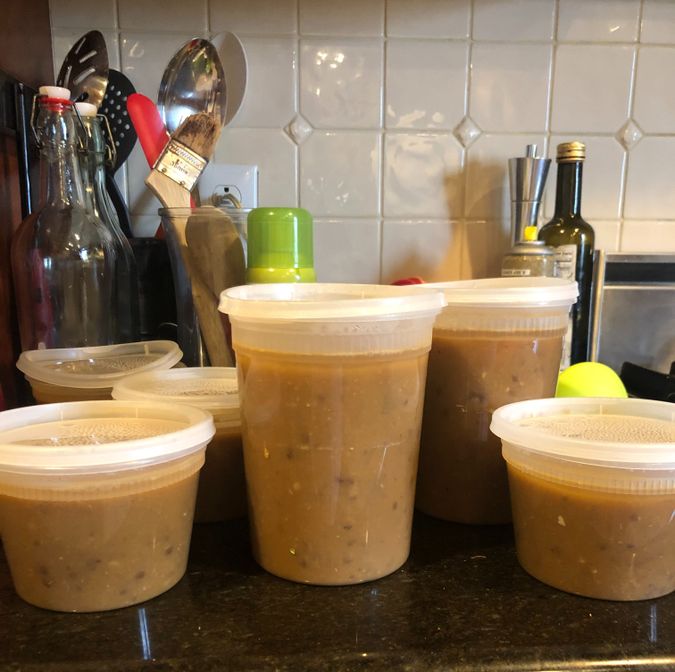 It disrupts my personal paralysis over the whethers and hows of this new new normal — should the vaxed-and-boosted commute occasionally amid the Omicron surge? Gather for a good friend’s birthday? See a movie in a theater? — to purée the whole thing with the aptly named soup wand, maybe my single favorite kitchen tool of all time.

It really is like magic, the way it feels to leave the house with a clear, achievable and objectively good goal, then to drop off the soup and send a text message announcing it’s there as I head back to my own home, to my helplessness and stress and paralysis — and, yes, to the next pot of soup.

In September 2020, I helped organize what we called The Great (Jewish) Soup Swap at my synagogue. It was around Sukkot, high soup season, and a couple dozen people signed up to make four quarts of (vegetarian, dairy- and gluten-free) soup.

Each of us kept one and gave away the other three — getting three different quarts from three other swappers in return. That’s my lentil soup-to-be-swapped in the picture above. I was a little embarrassed (but also thrilled) that the soups I got in return were in glass Mason jars or, in one case, a lovely old-fashioned milk bottle.

This fall, when the husband was in the hospital after Thanksgiving with a serious gall-bladder infection, our rabbi urged me to activate the shul committee that provides meals for families when someone is sick or in mourning. I demurred; this wasn’t so serious, there are plenty of takeout options in the area, and when I’d been the beneficiary of such efforts once before, we were overwhelmed with food.

The rabbi nudged: It’s not just for you, he reminded me. People love doing this mitzvah; people need to do this mitzvah.

And so that Wednesday evening I rendezvoused with my friend Sarah in the parking lot after religious-school drop-off. She handed me a quart of the sausage-lentil-kale stew she’d made that afternoon.

I drove back to the hospital, where Gary was having a follow-up procedure after emergency surgery to remove the gangrenous gall bladder the day before, and consumed it straight from the plastic container, lukewarm, with a plastic spoon.

That soup on that night was truly one of the best I’ve ever eaten — and only partly because Sarah had made it for me when I needed it. I’ve made the delicious recipe, from Real Simple, twice since, using turkey or chicken sausage, and I bet a vegan one would work just as well.

I brought a freshly made quart of it to one friend with COVID Wednesday night, along with a few of these Peppermint Brownie Cookies from NYT Cooking that my daughter whipped up before (virtual) religious school.

The other friend, whose (vaxed-and-boosted) husband was hospitalized that afternoon after his oxygen dropped to scary-low levels, got my signature Orange Soup from the freezer.

I call it Orange Soup because you can — and I do — use any mix of carrot, sweet potato and butternut or acorn squash, pretty much in any proportion. Like most soups I make, this one starts with a sautéed onion. Once it’s soft, you throw in chunks of those orange vegetables, plus a good amount of garlic and ginger (lately I’ve been using these frozen crushed cubes made on Israel’s Kibbutz Dorot and sold at Trader Joe’s ).

Cover with liquid — veggie stock is what I used to do, but a couple batches ago I was low and subbed half with almond milk and it was better than usual so I might stick with that; water can also work! — and season generously with cumin, curry powder, salt and pepper, plus a pinch or two of chili.

When I do this in the Instant Pot, I usually run it through the soup cycle twice, adding a green apple for the second round. It’s not really any harder or slower in a pot on the stove; once you’ve puréed, adjust the seasoning and reduce to your desired thickness.

I also make a mean lentil soup, and excellent veggie or turkey-chili. To the husband’s chagrin, I rarely make chicken-matzo ball soup, maybe because mine is definitely not as good as my mom’s.

I do like the roasted red-pepper-and-tomato, especially in summer — I put those vegetables and a quartered red onion and a head of garlic in the oven with olive oil, salt and pepper til they’re good and soft, and then simmer with stock before bringing in the soup wand. Yum.

Soup never gets old. There’s always someone who could use a quart. Especially now.

You’ve heard my soup story — now I want to hear yours. Plus, I’m always on the hunt for new recipes to try. Please use the blue button below to send your favorite soup recipes along with a soup memory and pictures if you have them. We may publish a selection.

Share your soup story (and recipe) by emailing [email protected]

Thanks to Jon Stewart, the internet exploded this week about the antisemitism of Harry Potter’s goblins; our Eliya Smith has a counterintuitive take, arguing that the only thing antisemitic about the goblins is assuming they’re Jewish.

You’ll find her brilliant essay in this week’s magazine, along with an excerpt from Jonathan Greenblatt’s new book, a look back at Jewish-connected characters on the anniversary of the Jan. 6 riots and much more.

Soup is good food, and other thoughts about how to survive the Omicron surge