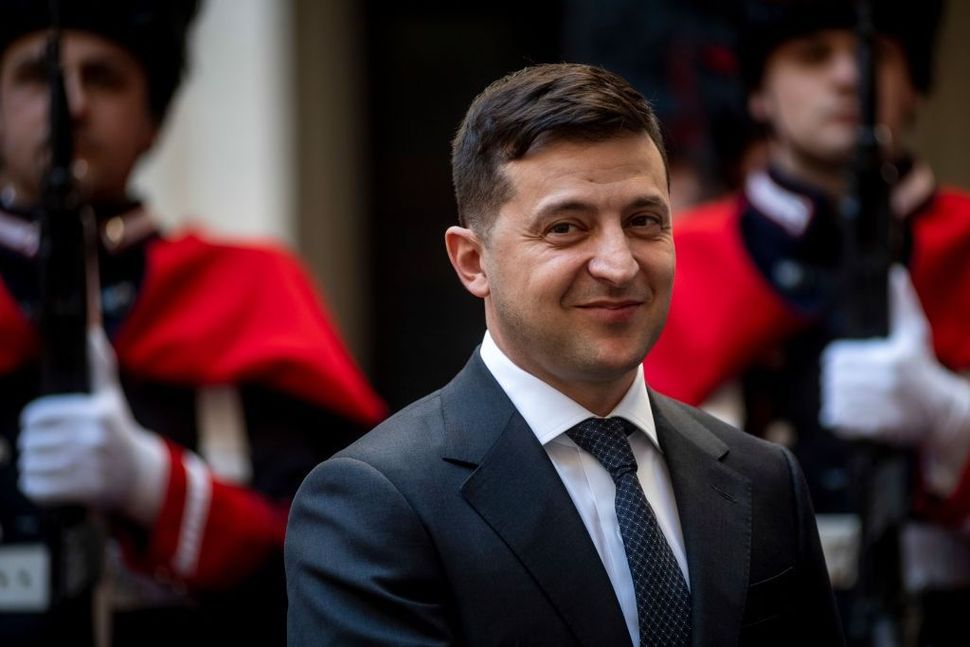 “Hey, do you know you were in a movie with the new Ukrainian president?” my brother texted me in the Spring of 2019. He included a screenshot of Volodymyr Zelenskyy’s IMDb page.

“Who me?” I wrote back, adding a perplexed hands-up emoji that perfectly represented the haggard suburban mom I now was.

I’d gotten used to these sort of revelations — that someone I had worked with during my years as a struggling actress had become a star. Still, never before had a former co-star become president of a country.

In 2009, Zelenskyy, your run-of-the-mill Ukrainian Jewish comedian, was headlining his first big film, which happened to be shooting in New York. This Russian comedy called “Love in the Big City,” about Russian expats’ romantic exploits in The Big Apple, was also an opportunity for me — a chance for a sizable paycheck for my vital role of “girl in sports club,” mainly, which was no small feat for an actress/waitress.

While the movie’s leads were flown in from Russia and neighboring countries (some of which Russia is now angling to invade), bit parts went to folks like lil’ ol’ me — immigrants hustling for the American dream. This was the only time being a foreigner helped earn me a few bucks. And it was fun to audition in Russian, to make money in Russian, to play in Russian as a grown-up.

After filming this movie —our movie, I like to say — I went on with my hustle until, eventually, I threw in the towel. Zelenskyy, meanwhile, skyrocketed to Ukrainian stardom in a comedy series called “Servant of the People.” He played a schoolteacher who became the country’s president when his anti-corruption speech went viral.

Somehow, after gaining a ton of supporters, he ran for the actual role of president, similarly promising to fight corruption and usher in change. Using the show’s popularity — his party was even named after it: SP, Servant of the People — along with social media, Volodymyr Zelenskyy was able to beat the incumbent Petro Poroshenko in a landslide. The stale oligarch was out and he was in, taking on the very role he’d portrayed on TV.

Equally extraordinary was Zelenskyy becoming the first Jewish president of Ukraine, a country where antisemitism reigned for eons. I know this personally — my father’s family was lucky to flee in the nick of time, avoiding the fate of over a million Ukrainian Jews murdered during the Holocaust. The role that local Ukrainians played in murdering their Jewish neighbors with the Nazis, whether by force or with enthusiasm, is a painful question only beginning to be studied. My dad, who grew up in Ukraine, had to later leave it as well because it was so difficult for a Jew to be accepted in a Ukrainian university. And yet, here was Volodymyr, the country’s Jewish funnyman-turned-president!

Zelenskyy has recently been criticized by some of his countrymen for surrounding himself with former comedy colleagues in his political life. As a New York Times article recently pointed out, the country is under the threat of attack by Putin and Russia’s military — there’s nothing funny about it. “It’s hardly a laughing matter,” wrote Andrew E. Kramer in The Times.

But Kramer also quoted another comedian who won a seat in Parliament with Zelenskyy’s party — Roman Hryshchuk. “Humor is a sign of intellect,” Hryshchuk said in defense, “it’s an advantage.” He also said the idea that only comedians run the current government is a “stereotype” promoted by opposition parties.

The New York Times reported further criticism of Zelenskyy’s party, like its questionable decision to use the money raised through government borrowing to build roads rather than for military spending. There’s a concern over the party’s overall lack of political expertise.

And yet, as the ancient philosophy of the Tao Te Ching puts it, “the soft overcomes the hard.” Perhaps hardened politicians should not be the bench mark for good decision-making after all.

During my flailing acting career — and amid a whole bunch of other trials and tribulations — I began relying on Taoist wisdom to figure out this thing called life. The Tao talks a lot about leadership, how being softer and less tyrannical is a sign of true strength.

In other words, Zelenskyy, not Putin, is stronger by those standards, as is perhaps the choice to build rather than to weaponize. The Tao also says, “The Master is ready to use all situations and doesn’t waste anything.”

In Volodymyr Zelenskyy, I see a person who took every turn of luck he’s had and used it to champion what he believes in.

When he was first announced as Ukraine’s president, Zelenskyy quoted George Washington in his speech: “Labor to keep alive in your breast that little spark of celestial fire, called conscience.”

My money is on the softer comedian with a conscience, not on the old-school tyrant. Chalk it up to my Soviet-Jewish-Taoist optimism.

Jessie Asya Kanzer’s first book Don’t Just Sit There, DO NOTHING: Healing, Chilling, and Living with the Tao Te Ching will be out Mar. 1, 2022. She’s also written for publications like the New York Times, Washington Post, and the Daily News. She lives with her husband and two daughters in Dobbs Ferry, New York.