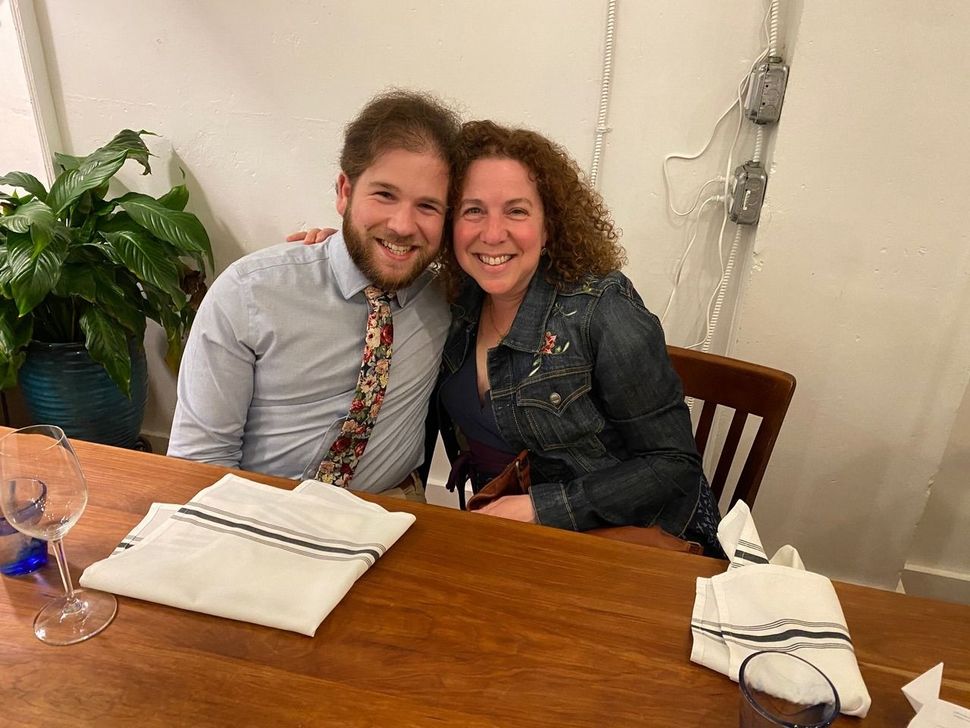 The author with her son, Asher. Courtesy of Lynne Golodner

As a progressive and pro-Israel mother of four teens, I’ve tried hard to instill in my children a balanced perspective on championing the challenged while supporting the world’s only Jewish state.

But when my eldest son wants to discuss Israel-Palestine, we often descend into heated debate.

Asher is a college sophomore and decidedly critical of the state of Israel. He has always enjoyed a good argument — the substance of the debate as much as the energy of the back-and-forth. Since he started college, his lefty politics shifted toward socialist-communist-anarchist. He leans more toward championing the Palestinian cause, going so far as to support the movement to boycott Israel.

It has been a sore point in our home for sure, but because we are close, it is something I constantly try to reconcile, as does my thoughtful son. We have engaged in quite a number of conversations, some of which got quite tense, to try to understand the other.

Initially, I felt rejected and threatened. If my son vilified the only Jewish nation on the planet, had I failed to instill Jewish values in my children? And what did his vilifying say about how he saw me and my unwavering support of Israel?

For me, Israel is a dream-come-true, a place where my people have power. Growing up in the shadow of the Holocaust, I reveled in Israel’s strong, confident image of Jews. In the 1980s, I met survivors at school and in my community, and draped a tallit over empty chairs on the synagogue bimah to remember Soviet refuseniks.

I experienced antisemitism myself — when a boyfriend’s father complained that a server was “Jewing” him, my boyfriend told him not to say that in front of me instead of telling him not to say it at all.

Asher, in contrast, doesn’t believe Jews need a special place. My children hear about Israel in the media’s unflattering terms: bully, occupier. Asher uses words like apartheid and genocide. My kids don’t feel oppressed. They don’t feel their heritage is connected to a nation halfway around the world. They believe being Jewish is a choice; I know it’s not.

I often ask Asher why he devotes such a disproportionate amount of energy to this one place. He says it’s because Israel is a powerful country that I support without question. He scrutinizes other countries, but doesn’t engage me in arguments because we agree on most other places, like our shared concern for the Uyghur Muslims in China.

I share Asher’s dedication to achieving fair treatment and equal access for all people. I believe both Jews and Palestinians are in need of these things, while he believes Palestinians need greater advocacy than Jews in Israel do at present. He sees Israel as an ominous oppressor while I see it as a saving grace after centuries of persecution against Jews.

Eventually, I realized that I needed to drop my defensive position and explore my son’s perspective. So I invited a Palestinian and an Israeli, who both live in the West Bank and work toward mutual benefit, to be guests on my podcast.

During the interview, my Palestinian guest, Noor A’wad, corrected me when I referred to the “conflict.”

“A conflict is a situation where both parties have equal power,” he said. I realized he was right. As a writer, I appreciate how words frame a discussion — and a debate. I thanked him for correcting me, and we discussed how to equalize the language as a first step toward equalizing the situation.

After Asher listened to the episode, he called me to apologize.

“We’re closer on this issue than I realized,” he said.

It was a turning point in our argument, as well as our relationship.

I grew to view our disagreement not as a threat, but as an opportunity for both of us to expand our views and for me to consider my son as a fully formed adult separate but equal in his perspectives.

“When you’re close with someone,” he told me, “you don’t get to lay out your argument and walk away. You have to engage. There needs to be a respectful back and forth.”

I agreed, and I like to think I taught him that. I also taught him to speak his mind and stand up for right over wrong. We raise our children to see things more clearly than we do. I tried to enlighten my parents on race and privilege, and now Asher is teaching me to listen, to confront my inconsistencies and blind spots.

I’ve offered to travel with him to the West Bank, to hear the perspectives of people on the ground. He says, “sure, some day.” At least he’s not saying no. Our relationship is lifelong and there is time to deepen this conversation by gathering more information to expand our perspectives.

In his second year at St. Olaf College, preparing to sing in the Christmas concert, Asher felt conspicuous as one of the few Jewish students on the Lutheran campus. He’d sung in plenty of holiday concerts before, but this one was religious, with only one faith story and all the participants buying into that narrow perspective.

So he wore a kippah with his choir robe. Now, he wears it every day. Our stances can change as we encounter more situations and reflect on them. I hope that will happen with my son on the matter of Israel. He hopes that for me, too. At least I know we’ll keep talking, and that’s the most important thing.

Lynne Golodner is the Detroit-based author of eight books, a mother of four, and writing coach. After a successful journalistic career, she has spent the last 15 years as a marketing entrepreneur and teaches writing courses worldwide, including her signature workshop, Finding Your Voice at Midlife.