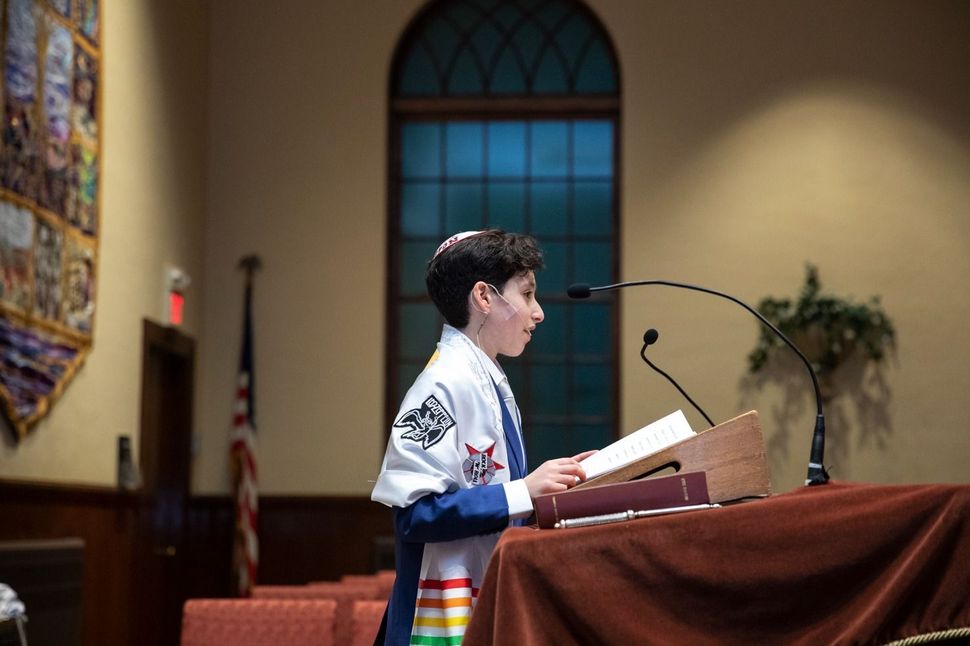 Ruby Marx, who uses feminine pronouns but identifies as nonbinary, became her congregation’s first gender-neutral “b mitzvah” in 2020. Courtesy of Rabbi Carole Balin

Two years before my bat mitzvah, I dressed up as a bar mitzvah boy.

It was the holiday of Purim, when costumed revelers celebrate biblical Esther’s derring-do. I wore a red blouse with an oversized collar tucked into chocolate brown Levi’s corduroys, a wrinkled yarmulke borrowed from my father, and a blue-striped magic-markered muslin “prayer shawl.” With a silver goblet for ritual wine fashioned out of Reynolds Wrap, I was good to go.

I cannot tell you why I felt compelled to “cross-dress” to represent a Jew coming-of-age in 1975. But I suspect that in my fifth-grade eyes, boys were the real Jews, and girls dressed up to pretend they were. 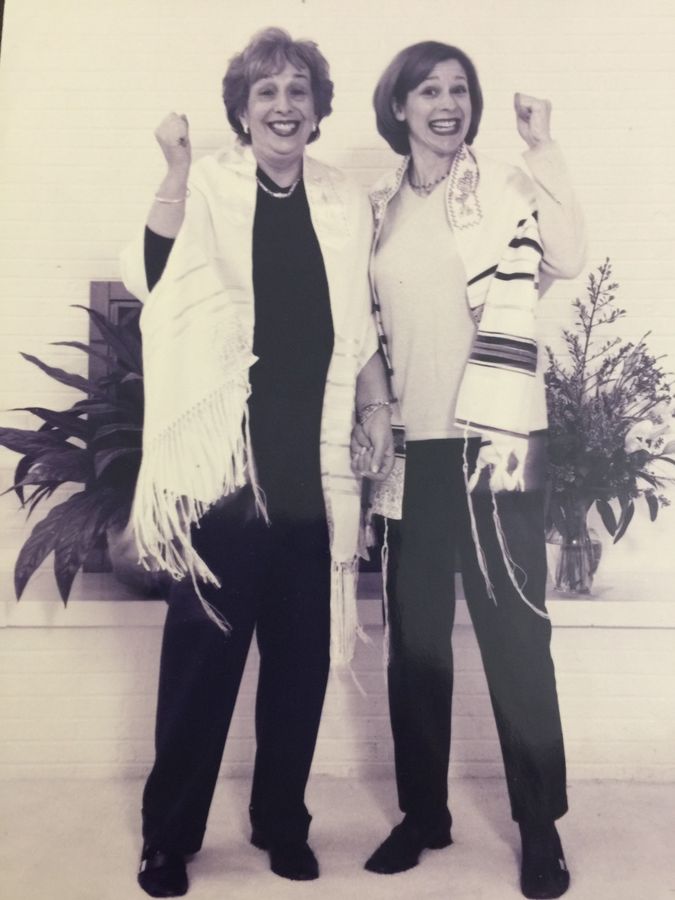 Boys got to have their coming of age ceremonies on Saturdays and participate in the Torah service with authentic prayer shawls and yarmulkes stamped with their own names; girls, who received the same religious education as those boys, had their bat mitzvah ceremonies relegated to Friday nights, when the sacred scroll typically remained in its holy ark out of our reach.

If only my fifth-grade self had known that young girls just like me had sparked a gender revolution that, while bringing progress in fits and starts, transformed Jewish life forever.

Rabbi Mordecai Kaplan introduced bat mitzvah for his daughter, Judith, on March 18, 1922 — two years after women won the vote — at his Manhattan synagogue known aptly as the Society for the Advancement of Judaism. He regarded the ceremony as a corrective to girls’ exclusion from Jewish education but not bar mitzvah’s equal. Judith was allowed to read from her Chumash, a book containing the Five Books of Moses, rather than the Torah scroll as the boys did. (Rabbi Kaplan reserved that honor for himself.) 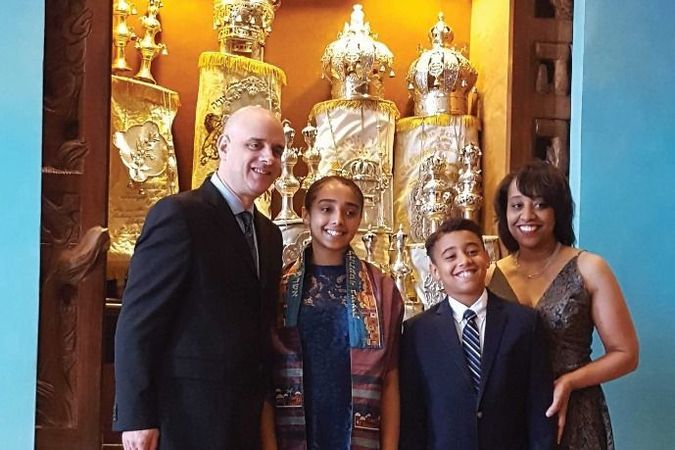 Whereas the bar mitzvah was the gateway to regular participation in Jewish worship for boys, a bat mitzvah was a dead end. After the ceremony, everything was expected to snap back into place as girls resumed their secondary status in the Jewish community.

But something unexpected happened along the way.

As hundreds followed in Judith’s footsteps, girls began to expect — even demand — to do what boys did. Sparks began to fly at SAJ when post-bat mitzvah girls petitioned to carry the Torah. They believed they were at least as strong as “those old men” who were allowed to march with the scrolls on the holiday of Simchat Torah. After winning that battle, they set their sights on regular ritual honors. What was the point of all that religious training if the bat mitzvah ceremony was one and done?

In non-Orthodox settings, girls not only gained parity with boys (and men), but spurred grown women to do the same. Women sought positions on synagogue boards and pushed to be counted in a minyan, the prayer quorum traditionally composed of 10 men. While Reform rabbis regarded the equality of women and men in the synagogue as axiomatic and resolved by 1893 that women would be eligible for full membership, with the privilege of voting and holding office in their congregations, the reality materialized many decades later. In the Conservative movement, where Jewish law holds sway, women were permitted to be called to the Torah for aliyot in 1955, and counted in a minyan in 1973.

When Sally Priesand became America’s first female rabbi in 1972, she had girls half her age to thank for paving the way. As bat mitzvah became well-established by the ’80s, women (and men) who had missed it as adolescents — either because it wasn’t an option or they opted out or weren’t Jewish at the time — felt inspired by their daughters to “come of age” as adults. 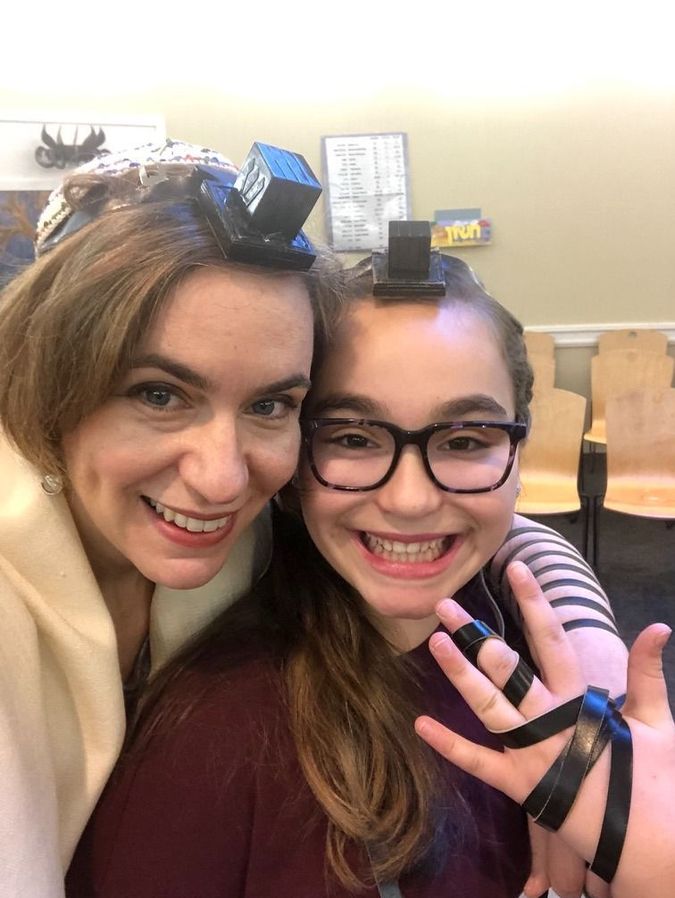 In less than 100 years — the blink of an eye in the long Jewish past — bat mitzvah girls pushed history forward. Paradoxically, their innocuity was their superpower: cloaked in seemingly girlish innocence, their participation became acceptable to Jews in the pews. Margie (Tarmy) Berkowitz, who became bat mitzvah in 1956 in Brookline, Massachusetts and later directed Hebrew College’s Camp Yavneh and Hebrew High School, said her Zayde marveled that she “could become bar mitzvahed.” Afterward, he never stopped asking her to chant Torah for him. Grandfathers everywhere, along with their sisters and their cousins and their aunts, suspended their disbelief in the face of all that girl power.

While girls at the cringey age of 13 stepped into the spotlight and put a nail in patriarchy’s coffin in the last century, the revolution is now entering a new phase as gender nonconforming teens upend old categories.

How do you shake gender out of a rite that marks either a Jewish girl becoming a woman or a Jewish boy becoming a man? The responses are as creative as they are diverse. Soren Claire Barnett, for instance, did it twice: they became bat mitzvah at 13 at a synagogue in 2011, they told me, and then bar mitzvah five years later during a Birthright trip to Israel. Ruby Marx, who uses feminine pronouns but identifies as nonbinary, became her congregation’s first gender-neutral “b mitzvah” in 2020. 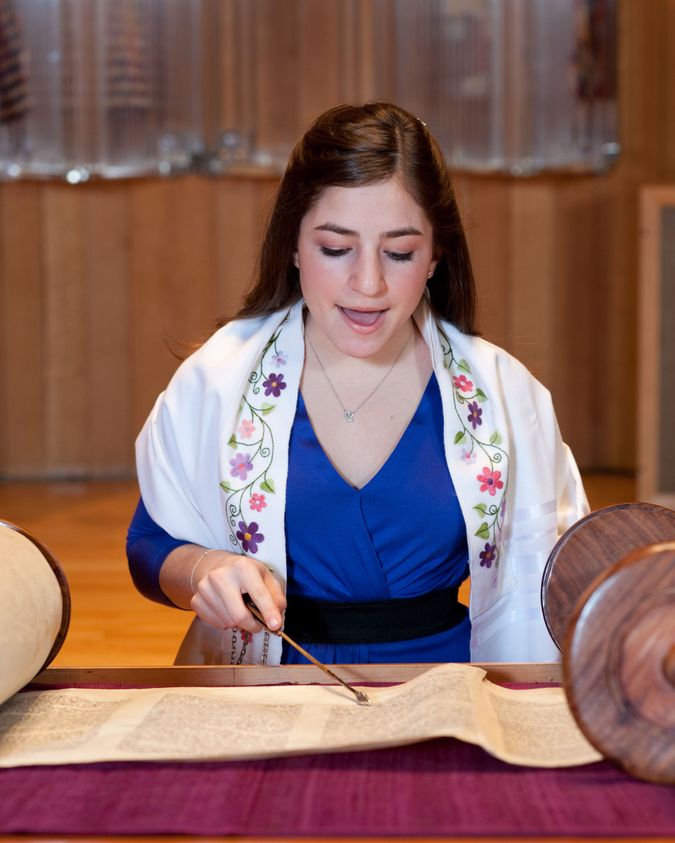 Eve Gertzman reads from the Torah at her bat mitzvah at Hebrew Union College, New York, on March 6, 2011. Courtesy of Rabbi Carole Balin

Today, we celebrate the bat mitzvah’s centennial. I give thanks for the many gutsy firsts that had a hand in my Jewish coming-of-age in 1977 and my rabbinical ordination in 1991. I will sing the praises of women who found courage in their daughters’ example to become bat mitzvah in middle age or beyond and to bring egalitarianism to synagogues. And I salute nonbinary teens challenging the gendered differentiation of Jewish life.

Next year for Purim, I think I’ll dress up as Judith Kaplan.