Activists are calling to ‘globalize the intifada.’ It’s a call for death, not peace 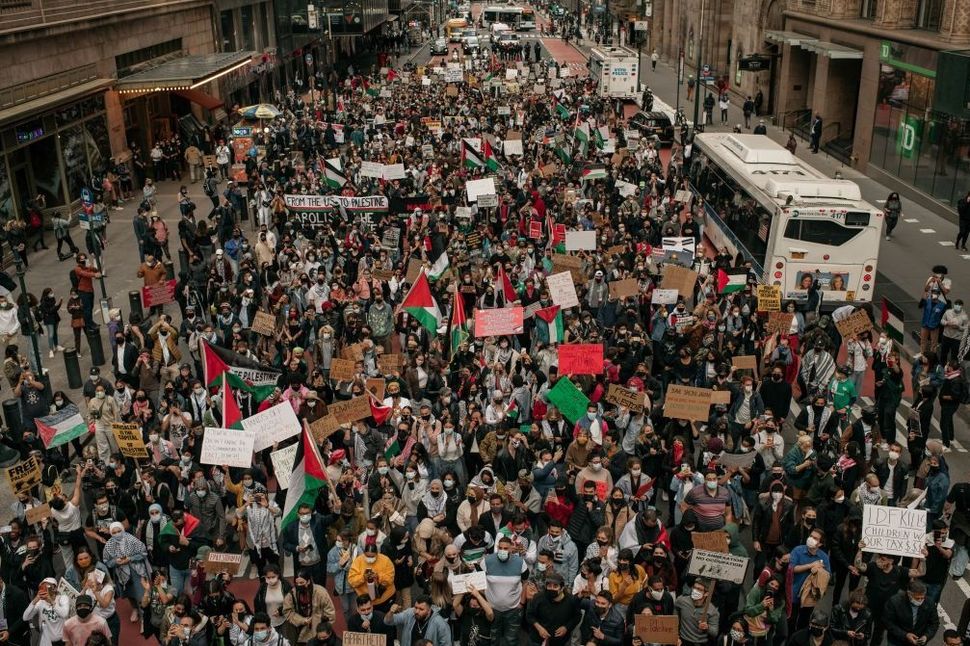 Protesters demanding an end to Israeli aggression against Palestine march in the street in Midtown Manhattan on May 11, 2021 in New York City. By Scott Heins/Getty Images

In the span of one week, three separate terror attacks in Israel have claimed the lives of 11 innocent people. Those killed included Arab, Druze, Jewish and Christian citizens of Israel, and two Ukrainian nationals. A young father who was taking his infant son for an evening stroll died protecting his child from bullets in Bnei Brak. An Arab police officer, newly engaged to his Jewish partner, killed one of the terrorists and lost his life in the process.

My WhatsApp messages with friends in the region are full of grief, dread and the dulled resignation of yet more bad news coming from Israel and the Palestinian Territories. One Jewish friend had a panic attack when a man on a motorcycle paused next to her on the street and reached into his pocket, fearing he was about to remove a gun. A close Palestinian friend who grew up in a refugee camp in Nablus still has nightmares of shielding his younger brother from rocks and bullets during the Second Intifada.

Like my friends, I’m in shock. But I’m also feeling angry at the chutzpah of those using these attacks for cynical purposes.

Five people were killed in the most recent attack in Bnei Brak, which occurred on Tuesday, March 29. The next day in New York City, organizers from Within Our Lifetime, Defund Racism, Palestinian Youth Movement and the CUNY chapter of Students for Justice in Palestine held a rally for the commemoration of Land Day, a Palestinian-led day of resistance to land expropriation.

The New York City chapter of Jewish Voice for Peace, an organization whose mission statement calls for self-determination for both Israelis and Palestinians, had a presence at the rally.

Video footage from the rally posted to Instagram shows chants of “from New York to Gaza, Globalize the Intifada,” and “there is only one solution — intifada revolution.”

These protests, which JVP-NYC attended and promoted on their social media accounts, culminated in hundreds of protesters marching seven blocks from Grand Central Station toward nearby Israeli-linked nonprofits like Friends of the IDF and Ateret Cohanim and the Israeli consulate. The march culminated in a final rally outside of Madison Square Garden. Many held signs that said, “Intifada until victory.”

Innocent Israelis, Jewish and non-Jewish, are being murdered on the streets of #Israel. The BDS-affiliated org ‘Within Our Lifetime’ took to the streets of NY to celebrate these murders.
If you needed proof that these orgs promote hatred, violence & #antisemitism: Here you go. pic.twitter.com/5KguIJeUaA

Organizers also distributed a physical map bearing the addresses of several nonprofits and the Israeli consulate. 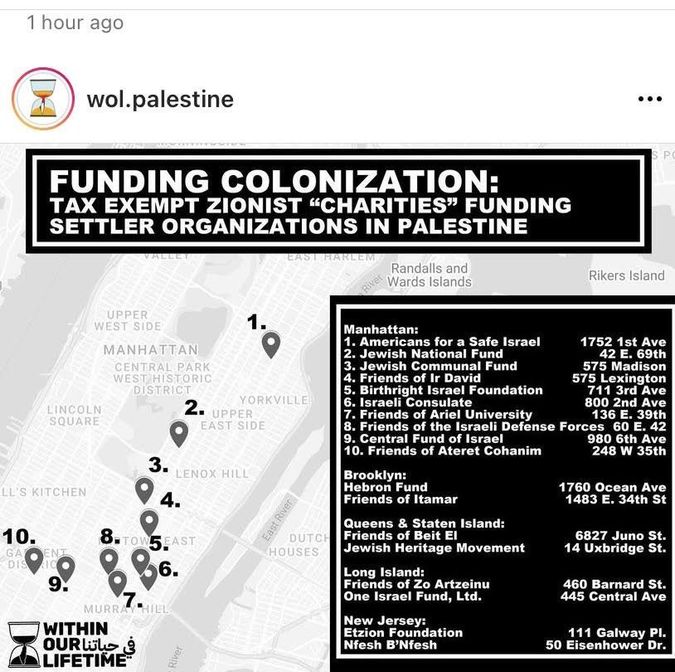 While there is nothing on paper wrong with showing up to protest outside an organization, the articulation and execution of this type of protest can walk a fine line between protest and calls for violence. Decolonize This Place, an “action-oriented movement and decolonial formation” whose social media posts JVP-NYC has regularly shared, in May 2021 posted a since-deleted call for “wondering what to do about solidarity in the meantime? Find targets nearby, Find where these zionist fools live, and where there offices are, and act! [sic]”

It’s the peak of privilege for people living thousands of miles away from the region to call for a violent uprising from the comfort of their couches or downtown Manhattan. As someone who opposes the Israeli occupation from my home in America, I am supposed to consider JVP members of my local community — fellow Jews who are working to end the subjugation of Palestinians, who still believe that peace in the region is possible if we work together. And yet, both their rhetoric and silence in the face of terrorism put my friends’ lives in danger, and are a dead end to any type of solidarity.

There was intense suffering on both sides: during the Second Intifada alone, there were 138 suicide attacks. Approximately 1,038 Israelis and 3,189 Palestinians were killed, and 4,100 Palestinian homes were demolished.

Since 2020, JVP has regularly shared literal calls for an intifada.

On Dec. 8, 2020, JVP commemorated the 33rd anniversary of the First Intifada — during which nearly 200 Israelis and 1,962 Palestinians died — with a poster titled “L’Chaim Intifada” that paired images of Jewish resistance fighters during the Holocaust alongside Palestinian terrorist Leila Khaled, who hijacked two planes in 1969 and 1970. 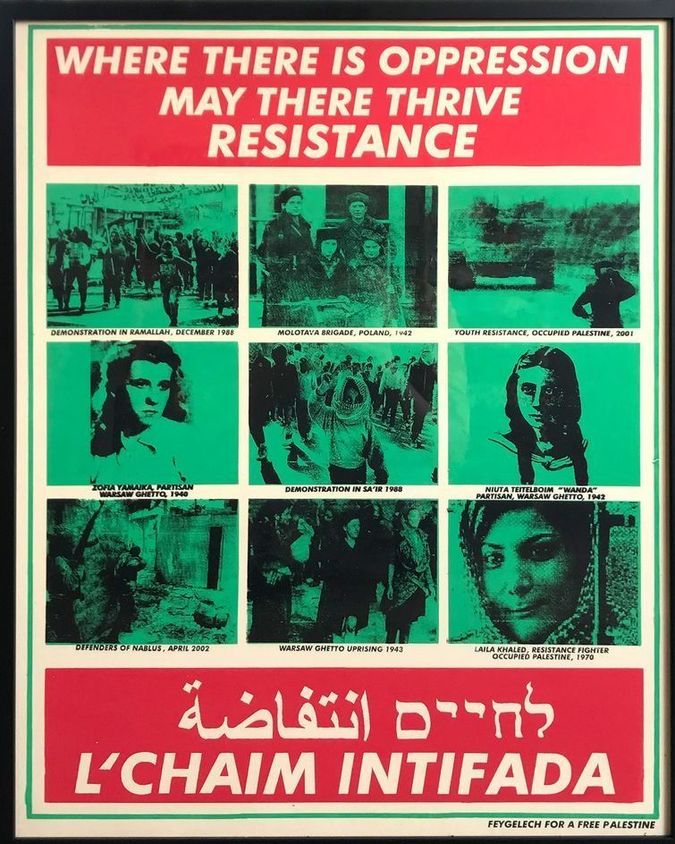 It’s hard to put into words the mixture of horror and disgust I felt when I first saw “L’Chaim Intifada.” Putting aside the comparison of Jews desperately fighting their own genocide with a convicted terrorist, it is abhorrent to pair “l’chaim” — literally “to life” — next to the word intifada, which connotes death.

On July 30, 2021, JVP-NY again shared an image with “Globalize the Intifada” in bold letters to their Instagram account. The post had originally been created by the Palestinian-led account Within Our Lifetime, in conjunction with Decolonize This Place, the same account that called for its followers to find Zionist targets “and act!” 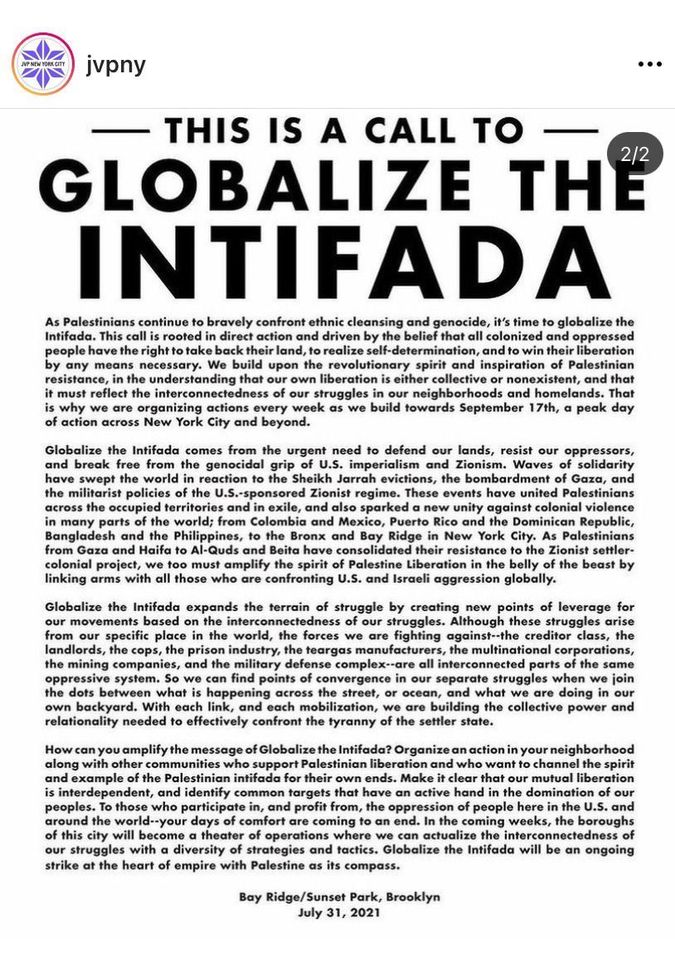 These messages calling for violence are not only antithetical to the principles this group claims to stand for, but are painful and destructive for both Palestinians and Israelis alike.

The language used by these groups is just vague enough to give plausible deniability if they are accused of violence. JVP may insist that intifada is a call for peace, and it is not a crime to advocate fiercely for Palestinians. But it is unacceptable to speak as the “Jewish voice for peace” while advocating for a term both Israelis and Palestinians understand to mean violent armed struggle against Israeli civilians.

Though data is not yet available for the recent Land Day rallies, it has been documented that anti-Israel rallies in the past have correlated with an uptick in physical violence against Jews. Reports of antisemitic incidents in May 2021, during the Israeli war with Hamas, were more than double the previous period in May 2020, and “the most dramatic year-over-year increase was in the category of assault, which rose from zero in May 11-31, 2020, to 11 in the same period in May 2021,” according to ADL. 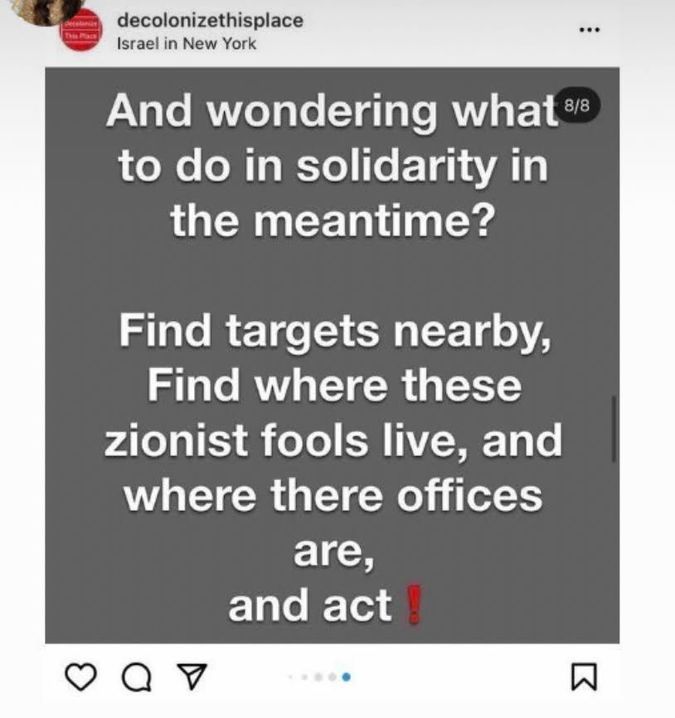 Attacking innocent civilians — whether they live in Israel, the West Bank, Gaza or America — does not benefit anyone. Championing terrorists does not advance peace, nor undermine the occupation. If anything, it entrenches it.

This type of rhetoric that JVP employs only deepens resentment and anger, likely contributing to both an uptick in antisemitism in the United States and an inability for Israelis and Palestinians to make necessary, difficult compromises for the sake of self-determination for both peoples.

During periods when Israel had a robust liberal-left eager to make peace, the Palestinians were committed to Israel’s destruction, NYU journalism professor Susie Linfield writes in her book “The Lion’s Den: Zionism and the Left from Hannah Arendt to Noam Chomsky.” By 1988, when the Palestine Liberation Organization was forced to recognize Israel and officially disavowed the use of terror, Linfield says, “much of the country [Israel] had moved to the right.” Likewise, young Israelis are much more right-wing than earlier generations, demonstrating the trauma that the earlier intifadas baked into the Israeli psyche.

The security fence, checkpoints and the IDF’s presence in Area A of the West Bank all were the direct result of the bloodshed and terror of the Second Intifada. If attacks on civilians in Israel continue, the country will likely close its borders to Palestinians in the West Bank and Gaza, which will cause harm to innumerable lives and livelihoods.

Israeli and Palestinian extremists will retaliate, as they already have, and organizations like JVP will continue to call for an intifada in the name of solidarity without having to suffer the literal life and death consequences for it.

It’s right and just to advocate for an end to the Israeli occupation. I only wish that organizations that speak in my name could refrain from calling for violence while doing so.

Activists are calling to ‘globalize the intifada.’ It’s a call for death, not peace