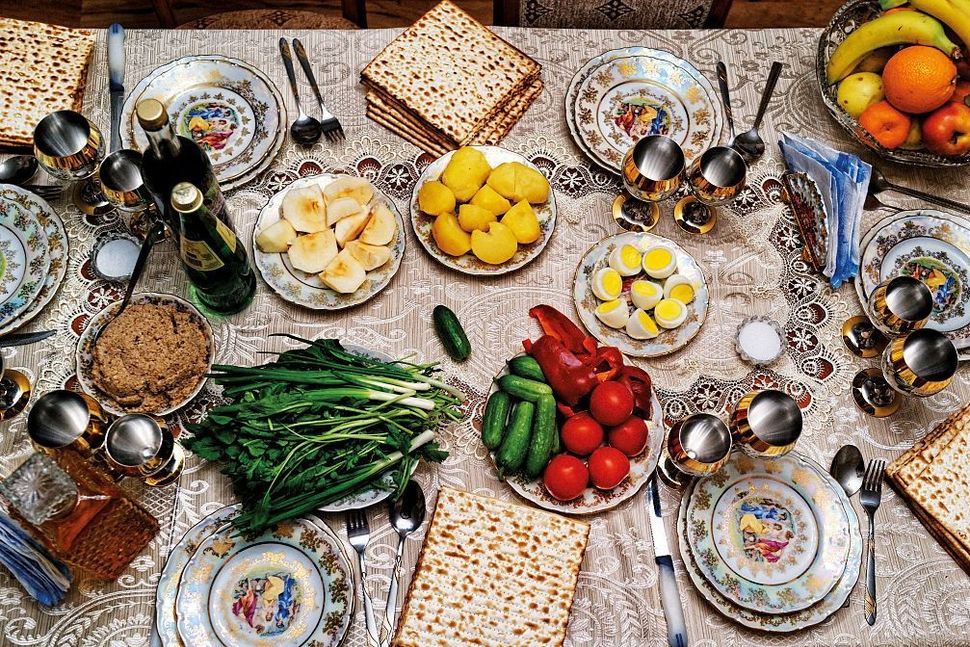 Seder (traditional meal) of the Jewish Passover in the Red Village of Guba, Azerbaijan, March 25, 2013. By Reza/Getty Images

“I hate religion,” the college student told my brother-in-law, Shlomo.

“Such chutzpah,” I fumed silently. I had flown down to Nashville to help my sister, Nechama, as she and her husband ran Passover services for the throngs of Jewish students who came to their nonprofit organization for Jewish students on Vanderbilt’s campus, the Rohr Chabad House. The five-course Shabbos meal this very student was eating was entirely free, every penny painstakingly fundraised by the man he was berating.

“Rabbi, we can’t make it to the Seder this year,” one of the popular frat house leaders told Shlomo next. Their spring break boat trip — a weekend of drinking, revelry, and debauchery — was coming up and the dates conflicted with Passover. I had overheard one frat brother bragging that he was bringing three girls with him.

I nearly snapped. If it was up to me, I’d have given these college students a lecture on discipline, priorities, and commitment to legacy. I was angry that they were choosing pleasure over tradition, that they could be so thoughtless as to denigrate the Jewish faith as they were mid-bite of their Shabbos meal.

But it was not up to me. Instead of getting angry at the fraternity brother who chose a party boat over Passover, my sister and brother-in-law responded by suggesting that the frat lead their own Seder, on the boat, in the middle of their merrymaking. Then my sister cooked, packed and sweated away to cater a kosher cuisine fit for kings and queens. She even had the frat brothers in her own kitchen, measuring out the correct amounts of matzo, maror, and all the accoutrements of the Seder plate. All free of charge, of course.

“Doesn’t this bother you?” I finally let my feelings slip as I leaned over a table, stuffing charoset into plastic baggies with my sister. “Without the presence of the frat boys, you’ll have so many fewer people showing up to your Seder!” As the future rabbi of the Lincoln Park Jewish Center in Yonkers, New York, I was obsessed with numbers, attendance and the positive power of popularity. There were so many other times this frat could have chosen to host their party other than during Passover (trust me, I grew up on the UC Berkeley campus, and was familiar with the no-excuses-needed reasons to throw a party). I felt frustrated with their lack of respect for honoring the story of our ancestor’s liberation from oppression.

“Not at all,” Nechama said as she tucked some of her sheitel behind her ears. “You have to realize. No matter what Shlomo and I tell the students during our Seder — no matter how inspirational we think we might be — it pales in comparison to the impact leading their own Seder will have on their Jewish future. When they stand up on that party boat in front of all their friends, pull out a matzo, drink four cups of grape juice, and recount Hashem’s liberation of our people, it will reach deeper into their souls than anything they will hear as bystanders of our grand Seder here.”

She zipped up a plastic bag and moved quickly on to the next one. We had hundreds more to package before the night was done. Then she glanced up at the photo of the Lubavitcher Rebbe which adorned their living room, the man who had inspired them. “Our mission here is not to run great events,” she continued. “ Our mission is to empower greatness in our students.”

I was quiet for a while after that. All of my siblings, including Nechama, were so inspirational, each one choosing a career where they could model a positive Torah lifestyle for others. And, often, this happened. They’d teach me something deep when I and, probably they, least expected it.

It got me thinking about “freedom,” the overarching message of Passover. On Passover, we get the freedom to choose, and even if it looks different from what we expect, the act of choosing makes us free and open to Divine expression. The ancient Israelites escaped Pharaoh’s ruthless rule to submit themselves willingly to the Creator’s governance. So too, the Passover freedom we celebrate today is the ability to choose to submit ourselves to our Divine mission. Because freedom is not doing what you want but becoming who you are.

I was upset at those frat boys for feeling free to do whatever they wanted, whenever they wanted. But my sister was teaching me that this was actually a glorious opportunity for them to practice self-actualization.

That’s the true message of Passover. Not that a couple of frogs and magic tricks led us to become self-autonomous as a people, but that men and women left their slavery behind in the desert to chase their destiny of being a “light unto the nations.” That a couple of people threw off the yolk of apathy and self-doubt to realize the depth and power they possessed within themselves. That people like you and me can be raised from the prisons of vanity, arrogance and self-worship to the glorious mountaintops of altruism, humility and spiritual freedom.

It doesn’t matter if that message comes from a mountaintop in Sinai or upon a party boat in Tennessee. All that matters is that we’re religious about it.