Long before I was barred from boarding a flight to Israel due to my political beliefs, I felt conflicted about my decision to show up at the Dulles International Airport this past Sunday. I was bound for Israel and Palestine as part of an interfaith delegation co-sponsored by my organization, Jewish Voice for Peace, along with American Muslims for Palestine and the Presbyterian Peace Fellowship.

Though I’ve been to Israel/Palestine nearly a dozen times before — I grew up visiting Israel with family, spent a summer in Israel with my Jewish summer camp, studied at Hebrew University in Occupied East Jerusalem in college, and spent three summers on the West Bank living and working with Palestinian communities — I have become much more uneasy about these trips. Since college, when I learned about the forced displacement of Palestinians that began in 1948 and continues to this day, I have been deeply unsettled by the idea that I have a “right” to visit the ancestral land of dear Palestinian friends and colleagues who cannot themselves visit what they consider to be their homeland.

Despite this unease, I became a rabbi for one core reason: to build toward justice and liberation for all people by organizing with Jews in deep partnership with directly impacted communities across borders and faiths. Our delegation planned to spend 12 days in Israel and the occupied Palestinian Territories, meeting with Palestinian and Israeli grassroots activists and faith leaders and visiting our respective holy sites.

Israel’s Ban Of BDS Supporters Stirs Rather Than Stifles Debate

Instead, five of us were barred from even getting on the flight. When I arrived at the check-in counter at the airport, to my shock, a Lufthansa airline employee informed five of us — three Jews, one Christian and one Muslim — that the Israeli government had told the airline not to let us on board.

This isn’t just about me, or Jews or other faith leaders not getting to go to Israel. Banning, profiling, detaining and deporting Palestinians and Muslims at Israeli airports has long been part of Israeli practices. This pattern has been documented not only by human rights organizations but also by the U.S. federal government, and has been explicitly acknowledged — and condoned — by Israel’s High Court. In fact, on the same day that we were stopped at Dulles, a Palestinian-American activist was denied entry at the Allenby Crossing from Jordan into Israel.

But what happened to us Sunday was something new. We were being barred for our beliefs, we would learn. In a statement, Israeli officials confirmed that we were denied entry because of our support for boycott, divestment and sanctions against Israel, also known as BDS. They gave a list of criteria for barring future activists from “targeted organizations,” as part of the implementation of the “BDS ban” that the Israeli Knesset passed in March. Strategic Affairs Minister Gilad Erdan told Haaretz, “We will not let key boycott activists in here to harm us.”

With the BDS ban, Israel promised to ban foreign nationals who publicly call for sanctions against it. Widely criticized as a huge infringement on basic civil liberties like freedom of speech and nonviolent resistance, my fellow travelers and I are its first victims. By criminalizing activism for Palestinian rights through this travel ban, Israel is shattering the myth of itself as a Jewish democracy. A country that bans those who criticize its human rights violations is fundamentally anti-democratic. To deny me entry because I publicly and unapologetically oppose the oppression of Palestinians is an act of desperation by a government that knows its rule by force is unsustainable.

But the ban also reveals that Israel is deeply afraid of the power of people’s movements, non-violent resistance and human connection across borders. Historically, campaigns utilizing boycotts and divestment campaigns have built essential grassroots pressure, demanding change from governments and institutions enforcing oppressive policies. I believe that these tactics are the most ethical and hopeful way forward to ensure that, one day, Palestinian families might pray, live and move freely in their homeland.

I ultimately decided to join this delegation because connecting with Israeli and Palestinian peace activists on the ground with a multiracial and multifaith group would have provided me with an opportunity to build the types of faithful resistance we need toward justice for all.

Israel knows these connections between people and movements are powerful enough to challenge its nearly 70 years of dispossession and 50 years of occupation. That’s why BDS scares Israel so much. The good news is that Israel’s repressive strategies aren’t strong enough to stop people from making connections between their struggles for justice.

We’ll keep making them until Palestinians can board the next Lufthansa flight home.

Rabbi Alissa Wise is the deputy director of Jewish Voice for Peace. 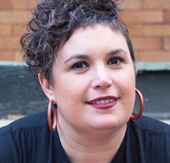