No, Orthodox Jews Are Not White Supremacists — And Neither Is Trump 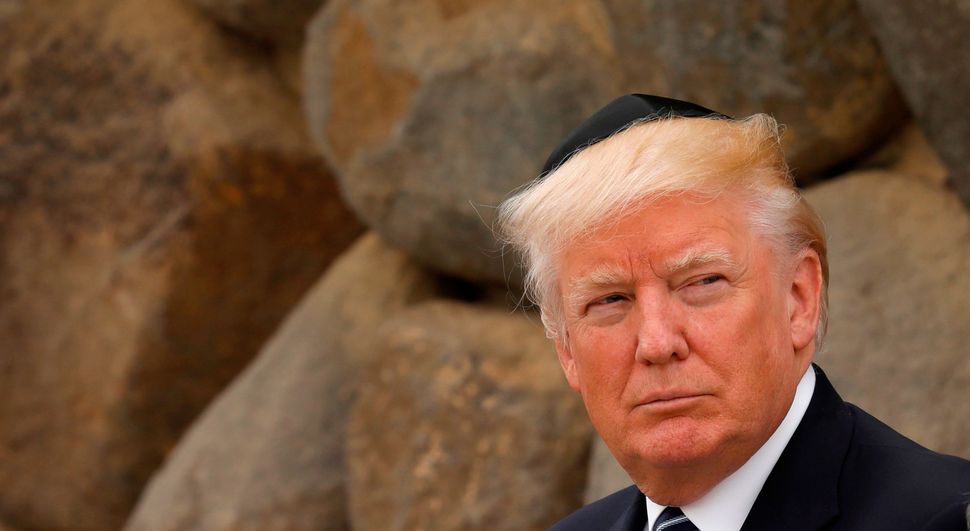 Hostility toward Judaism, Jewish observance and observant Jews has always been a central part of anti-Semitism. Sadly, it doesn’t always come from non-Jews, as Eli Steinberg noted recently in these pages, in an op-ed called “Anti-Orthodox Is the New Anti-Semitism.”

Steinberg could have been referring to another opinion piece which emerged but two days earlier, by Elad Nehorai, also in these pages, titled “White Nationalism Is Spreading in the Orthodox Community.”

We cannot minimize the problem of racism. It exists in all communities and needs to be extinguished in all communities, ours included. But to stereotype a particular group, whether religious or ethnic, as being racist is part of the problem, not the solution. How would we react to an op-ed titled “Nationalism Is Spreading in the Latino Community”? Does this not prove Steinberg’s point, that targeting the Orthodox is somehow more acceptable?

We must recall that Jews, who have suffered at the hands of whites more than most anyone, have never themselves been leading racists. And yet, the belief that Jews are supremacists who despise humanity and care about only their own is a core anti-Semitic canard. This is how Rabbi Naftali T.Y. Berlin, dean of the famed Volozhin Yeshiva, summarized anti-Semitism a half-century prior to the Holocaust (Commentary to the Torah, appendix, Gen. 31:29):

This is the way of the nations: that if they see one Jew steal, they say that all those who serve G-d are thieves — and that Judaism itself gives them permission to do so. And for this reason, one should do badly to [Jews] and stamp out Judaism.

This belief, that Jews are anxious to plunder the rest of humanity for Jewish benefit is found in the fabricated “Protocols of the Elders of Zion,” in Nazi literature, and in the minutes of the Mahwah, New Jersey, town council, as Steinberg showed. Look at what we are routinely told about Israel. Myths of Jewish control of the banks, government and the media all grow from this same sickly root, and, exactly as Rabbi Berlin explained, this has been used to justify everything from pogroms to expulsions to genocide.

And yet, despite the proliferation of this idea, a canard it remains. And just as Jews are not a group of evil, self-interested plunderers, they are also not becoming white supremacists, contra Nehorai’s article.

Nehorai’s piece begins with the report that President Trump made a disparaging reference to countries designated for Temporary Protected Status and/or to Third World countries in Africa. Some said the comment was aimed at the racial makeup of the countries and was thus racist. But these accusations were in line with false accusations of racism and anti-Semitism that have dogged the president from the beginning of his campaign, as the Forward’s J.J. Goldberg reminded us.

The use of crass and unbecoming language, which the president denied, doesn’t make him a racist, and neither does the underlying sentiment. The TPS program protects foreign nationals from deportation “due to conditions in the [home] country that temporarily prevent the country’s nationals from returning safely, or in certain circumstances, where the country is unable to handle the return of its nationals adequately.” If one were to list countries to which one might wish to move, considering everything from human rights to medical care, indoor plumbing and high-speed internet, those countries would end up near the bottom of the list.

It is not racist to admit this, unless of course you believe that the TPS program, established with bipartisan support in 1990, is distinguishing between countries based on race or ethnicity. I don’t believe this, and I don’t think Nehorai does, either.

That Haiti is not a country to which we would aim to move is not a racist sentiment. On the contrary, humanitarian concern over the conditions of their home country is the very reason we do not deport Haitians. We give preferential treatment to them over people from Norway, or Barbados, and to those from El Salvador and Nicaragua over those from Costa Rica and Panama.

To be sure, racists like Richard Spencer and David Duke were eager to co-opt the president’s comments for their own use. But it is neither fair nor appropriate to use guilt by association to paint anyone with the temerity to defend the president’s dismissal of those countries as a racist.

Yet the writer does precisely this, quoting an Orthodox Jew who said roughly as follows:

Option A: El Salvador isn’t a ‘dump,’ so they don’t need 17 years of Temporary Protected Status, and migrants from there should be sent home immediately. Option B: El Salvador is, in fact, a ‘dump.’

Nehorai claims that he “was amazed at how similar” that commenter sounded to Spencer. This is astounding. Spencer said that solving Haiti’s problems requires more European, white Frenchmen and fewer Haitians. The commenter explains, using the president’s vulgar term, that countries are designated for TPS because they are in bad shape. This explains why we harbor El Salvadorans in the United States, a humanitarian practice that racists like Spencer would oppose.

Yet Nehorai not only describes the similarities of the two statements, but also their differences. On these grounds, he accuses the entire Orthodox community of turning to racism.

He does the same when it comes to the neo-Nazi Unite the Right rally. The protesters had a permit to march, and were violently attacked by Antifa, the same group that tries to prevent Ben Shapiro and other conservative and pro-Israel speakers from being heard.

Video footage from that rally showed that there was violence perpetrated by both sides, which is exactly what the president said, and condemned. I do not believe the transcripts support the claim that he called Nazis “fine people.” He said that both good and bad could be found on both sides. Still, regardless of whether you agree with me, to call this view racist is wrong.

So how much actual proof of the spreading white nationalism among the Orthodox are we left with? None at all.

Unfortunately, that didn’t matter. To many, Nehorai’s article merely confirmed what they already “knew.” How often do we hear that Orthodox Jews care only about themselves, and don’t even accept the Jewish status of other Jews? You see? This proves (ultra-)Orthodox Jews are racists, like we’ve always said.

Many of the most prominent Orthodox institutions are devoted to serving non-Orthodox audiences, including Aish HaTorah, Ohr Somayach, the Community Kollel network and Chabad — which now has centers in all 50 states. Could we imagine young couples moving out to the proverbial middle of nowhere to serve people they don’t care about?

The myth of Jewish supremacy, that Jews care only for themselves, is not borne out in the observant community, either. In Israel, where the Orthodox comprise a much higher percentage of the total population, it is difficult to have something go wrong anywhere in the country without an Orthodox-led organization offering help without regard for race, ethnicity or religion: United Hatzalah, Yad Sarah, Ezer MiTzion, Ezra L’Marpeh, Laniado Hospital and Zaka are just a few examples. So it should be obvious that those claims are ridiculous calumny, yet they still have “traction.”

If we are going to celebrate diversity, we must go far beyond platitudes about coexistence. The very least we can demand is that we refrain from stereotyping other Jews. Tolerance begins at home.

Rabbi Yaakov Menken is the managing director of the Coalition for Jewish Values.

No, Orthodox Jews Are Not White Supremacists — And Neither Is Trump