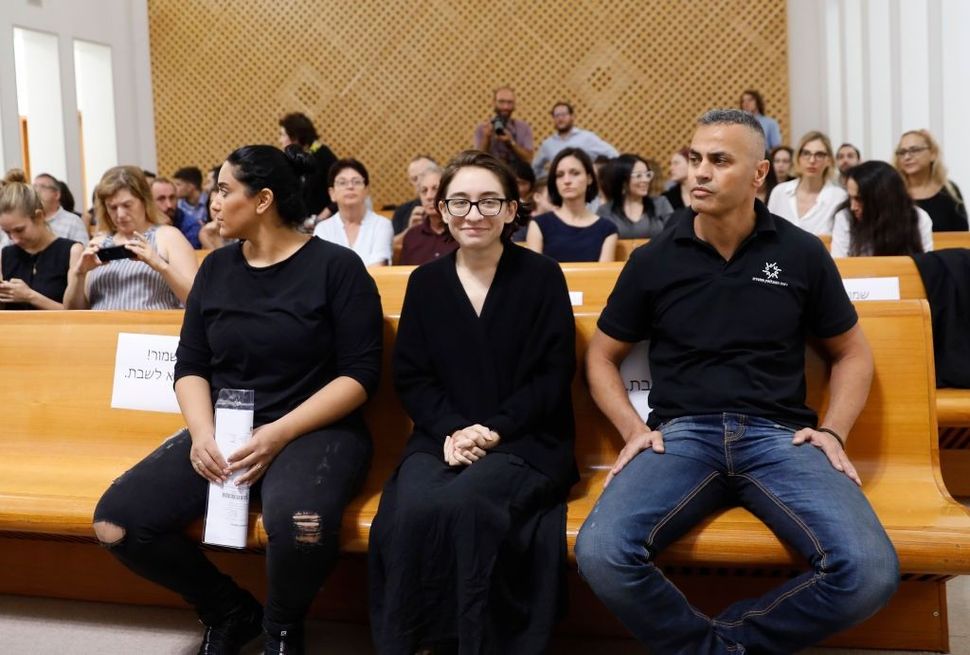 US student Lara Alqasem (C) attends a hearing at Israel’s Supreme Court in Jerusalem on October 17, 2018 Image by Getty Images

The Israeli Supreme Court was slammed by leading Israeli politicians for its recent ruling not to deport the young Lara Alqasem, an American student with Palestinian origins.

Gilead Erdan, Israel’s Minister of Strategic Affairs, who led the campaign to deport Alqasem, said that the court’s ruling constitutes a victory to the Boycott, Divestment and Sanctions movement.

However, the Israeli Supreme Court, which became more conservative following the recent nominations of right-wing judges, did not accept the accusations of Erdan and others against the young student, and claimed that her desire to study at the Hebrew University in Jerusalem reflects the facts that she de facto recognizes the State of Israel.

Voices criticizing the court stressed that the judges do not understand how the BDS movement works, and a leading Likud MK, Dr. Anat Berko, proposed a bill to be endorsed by the government that would give 7-year jail sentences to activists who play a role in promoting boycotts against Israel.

But the fact that Alqasem emerged triumphant out of her legal struggle to study in Israel is not a victory to the BDS movement, as the Israeli right claims. In fact, what was shown in the Supreme Court’s ruling is that Israel, at least in legal terms, is a tolerant state that allows its criticizers to enter its borders and live in the country despite their political criticisms of the government.

Moreover, it was demonstrated that the Jewish state must be open to the world and have a dialogue, even with its bitter opponents, if it wishes to be a liberal state.

Thus, it is not Lara Alqasem that defeated Israel’s government, but rather the liberal Zionist thought that triumphed.

Zionist liberalism, as it was conceived by Jewish thinkers like Ze’ev Jabotinsky, always advocated for an open society characterized by maximum civil freedom and political liberty rather than with isolationist tendencies that seek to maintain a closed tyranny of thought characterized by chauvinism and bigotry.

The fight to allow Lara Alqasem to stay in Israel marks the divide between two schools of thought in the country: on the one hand, Zionists who wish to promote the Jewish national cause by democratic and liberal principles, and on the other hand, nationalist hardliners who see Israel as a Sparta-like state with no need to carry forward an inclusive politics of genuine dialogue.

The rift between the two camps is deeper than ever, and unfortunately, the Israeli public tends to endorse views of isolationism, conservatism and hard nationalism.

While liberals in Israel are isolated today more than ever, right-wing conservatives manage to rule the public discourse. The right-wing campaign against the Supreme Court’s ruling in the Lara Alqasem case will identify the court of law with the country’s enemies, hence the idea of Israeli lawmakers to promote a bill that would not allow free exchange of ideas in the country. Punishing BDS or pro-BDS activists by imprisoning them is just the opposite of what Ze’ev Jabotinsky or Theodor Herzl believed.

While liberal Zionism is still alive, despite the attempts of Israeli nationalists to put it to death, it seems that Israel faces a danger of becoming a state where the only thought to be permitted is the one identified with the policies of the government.

You can see another recent example of the undemocratic atmosphere when a popular Israeli Arab TV journalist, Lucy Aharish, married a Jewish actor of Fauda fame, Tsahi Halevi, and was inundated by hate, bigotry and chauvinism.

The current political and social climate in the Jewish state is intolerant, and the way many leading Israeli politicians act brings about a discourse of hate, not only between Jews and Arabs, but also among Jews themselves.

While the ruling of the Supreme Court reflected a victory of basic liberal and Zionist values, it seems that a large majority within Israel is pushing the country down a different path.

Those in Israel who cherish the legacy and heritage of the country’s founders must launch a principled political fight to reclaim the Jewish state.