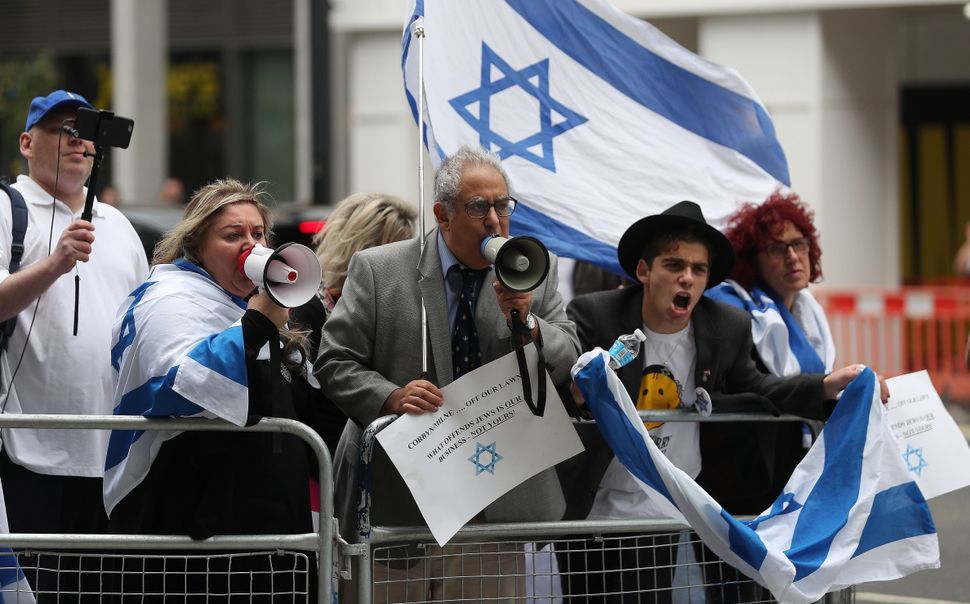 Demonstrators hold placards and flags of Israel as they protest outside the headquarters of Britain’s opposition Labour party in central London on September 4, 2018 Image by Getty Images

A few weeks ago I was contacted via a friend by the chair of Dulwich and West Norwood Constituency Labour Party, which represents the London Borough adjacent to the one in which I live. The individual asked me if I would run a training session for them on anti-Semitism.

Aside from my extensive involvement in Jewish activism, one of my jobs is in Holocaust research, and another is teaching in a synagogue. I spend so much time reading, talking and arguing about anti-Semitism that giving some time to address the issue in the Labour Party, something I feel so strongly about, seemed like a no-brainer.

Indeed, when it comes to anti-Semitism in the Labour Party, I have found myself often treading an awkward middle ground those who seek to use anti-Semitism to discredit the Party leader and his supporters, and pro-Corbyn activists, Jewish and otherwise, who can be too quick to dismiss accusations of anti-Semitism as mere slander.

I can understand both points of view. My position has always been that incidents of anti-Semitism are real and they are worrying, but with the right conversations and willingness to learn, in most cases, they can be dealt with.

It is for this reason, I believe, that I was invited to speak at this particular branch, where there have been frequent clashes over the issue between pro- and anti-Corbyn activists.

Having given the above disclaimer, which, along the rest of the talk, was recorded, I went on to describe my own experiences of anti-Semitism — on the left, on campus, at work and also within the Jewish community. I gave a deeply personal account of my own experience with the pro-Palestine left, my views towards the state of Israel as they developed and the emotion which this carries for me and other Jewish people.

Having stated that what I wanted to do was not provide an authoritative “last word” but simply share my own experiences and thoughts in the hope of they might illustrate and help people to better understand and address the issue, I did not for one moment expect that I would come under attack.

Yesterday, I was at work in a Holocaust archive preparing documents for a display when I got a message from a friend telling me to check the website of the Jewish Chronicle.

On the day before I gave the talk last week, they had published a fairly bland article about it, clearly trying to make me look stupid with a photo of me in a Pikachu onesie and citing my failed UJS presidential campaign. I expected something similar.

Shocked doesn’t cover what I felt when I saw the headline: “Jewdas activists compares Zionism to Nazi Ideology.”

It didn’t help that a moment earlier, I had been holding a copy of a telegram sent by a mother to her daughter moments before she was deported to Auschwitz. Theirs is one of the many families whose letters I’ve been poring over during recent weeks, watching their stories unfold as they tried and failed to escape to Britain and the US.

I’ve been working on a tight deadline, and I haven’t really had the time to process the emotions I’ve had during this project. So I guess it’s no surprise that after reading that JC headline, I had to quickly excuse myself and go outside to cry.

I spend so much of my life fighting Nazism and researching how this hateful ideology rose to power, and here a Jewish newspaper is claiming I minimized the ideology under which members of my own family were murdered.

Not only did I not make this comparison during my session last week, but I also made it clear that while I myself am not a Zionist, I sympathize with the reasons why so many Jews are Zionists. I even stated that in 1948, if I was sitting in a displaced persons camp, rejected by other nations, like so many of the people whose stories I’ve read in archives, I like them may well have become a Zionist.

I repeatedly described how Zionism is a heterogenous ideology, that means different things to its different adherents. To quote directly from the recording again, “I would still argue that Zionism is at its root a racist ideology because it is a form of nationalism, and I would definitely argue that Zionism in how it manifests in the state of Israel today… is racist. But…when I was growing up, Zionism didn’t mean I support the government of the State of Israel, I hadn’t even thought it through that much. Zionism just meant that I believe that after what I’ve learned about what happened to my ancestors in history, that Jewish people need a state to be safe and secure.”

Concluding my session, I said that “the main lesson that I have in terms of anti-Semitism training is to try as much possible to avoid talking about Zionism…about an ideology which just like other nationalisms, just like British nationalism ,is hugely varied. There are people here who call themselves patriots and are socialists, there are people who call themselves patriots and who march along with Tommy Robinson (a British Fascist.)”

I then quoted Emma Goldman, and urged people to direct their criticisms of Israel at the state and its actions, not ordinary Jewish people who still believe in the need for a state for a multitude of reasons. I said that while much-needed discussions are being had in the Jewish community, it is not fair for non-Jewish activists to demand this of Jews, but that “Jewish people need to be respected and allowed to have those debates.”

Lee Harpin, the journalist formerly arrested for phone hacking who reported on my talk for the Jewish Chronicle, failed to mention any of this nuance in his article.

He also failed to mention that on several occasions Zionist members of the audience vocally agreed with me — one even stood up and thanked me for what I had said. Quoting me multiple times, Harpin failed to provide context for any of the quotes, cutting them short or not clarifying when they were part of a conversation.

Harpin went to great lengths to record my slightly flustered attempts to mediate a debate from the floor about Ken Livingstone and his now infamous remarks on Hitler’s “support for Zionism.” He neglected to mention that these quotes were not part of my speech, but were made in response to questions from the floor, and that the topic had been raised because I actually used Ken Livingstone’s comments as one of the examples of anti-Semitism with which I illustrated the talk.

To take one cherry-picked quote, Harpin reported that I said, “To make generalized comments about Jews, to make offensive statements about Hitler, who has never been a defender of the Jews, is in my opinion anti-Semitic — but it doesn’t make you an anti-Semite. It’s complicated and I think part of the problem is that in the current climate…we are very quick to jump on people.”

He did not report that I was responding to someone defending Livingstone, pointing out that he employed a number of Jews. The point I was making was that anti-Semitism, like other forms of racism, manifests in different forms, including casual comments, which still need to be tackled.

However, the best way to tackle such examples of anti-Semitism that may be misguided, rather than malicious, isn’t necessarily to label them “an anti-Semite,” but rather to focus on what they said, and to give them an opportunity to learn and alter their attitude.

I concluded this conversation saying that contrary to this, Ken Livingstone, who has repeated his anti-semitic remarks again and again, “urgently needs to stop talking.”

Fundamentally, and to return to the accusation which has caused me the most distress, at no point during the talk did I compare Zionism and Nazi ideology, and two lawyers have now confirmed that the headline is defamatory.

I have emailed the Jewish Chronicle twice in the past 24 hours asking them to take the article down or at least address the outright inaccuracies, and I have yet to receive a reply.

It’s been an upsetting 24 hours for all of the reasons I’ve described, but also because of what it demonstrates about the chances we have of actually tackling the rise in anti-Semitism in this country.

It was a stressful evening, finding myself mediating between other Jewish Labour Party members in what was already clearly a heated issue in the branch, and realizing that a couple of members of the audience, no doubt one of them the reporter, were trying their very best to trip me up.

I wouldn’t mind being criticized for being slightly clumsy in some of my responses — as a baby historian, I’m definitely far too quickly drawn into historical debates. Nor would I mind the Jewish Chronicle simply reporting on the things I said that I know they disagree with — my own views on Zionism and Israel, for example. But what they have printed is a gross misrepresentation of my beliefs and opinions, and even worse, they are using the history of the Holocaust to do so.

The history of the Holocaust and Nazism is not a flag we get to wave in this endless battle over who gets to have the final word on anti-Semitism. It happened to real people, my family, and people I spend so much time researching it starts to feel like I know them.

I’m beginning to agree with Dulwich and West Norwood CLP member Cathy Ashley when she called the Labour Party a “hostile environment” for anyone trying to challenge Holocaust denial and tackle anti-Semitism. However, this isn’t the just fault of the Party for being too slow to tackle comments like those made by Ken Livingstone, nor of Corbynite activists who shout down allegations of anti-Semitism. It is also the fault of right wing Jewish publications like the Chronicle, who are clearly far more interested in crushing the Jewish left than they are in crushing anti-Semitism.

As a leading Jewish newspaper, they have a responsibility to encourage constructive discussion and support a range of Jewish opinions on the issue, not use inaccurate reporting to try to dictate which Jews do and do not get to have their say.