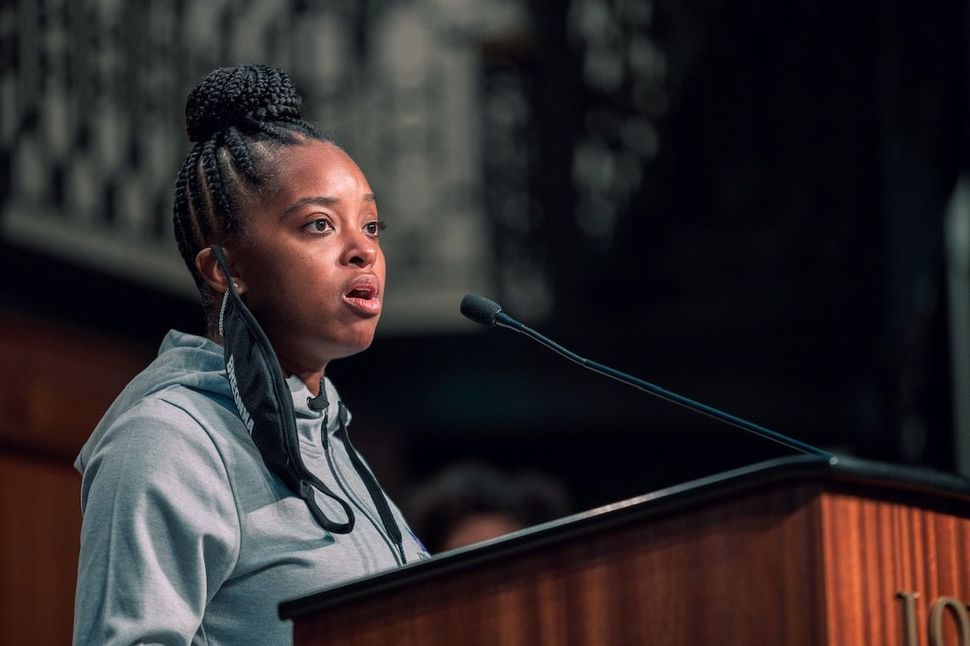 The Forward’s coverage of the Recording Academy’s award show, “The Grammys Highlighted Jews of Color But Picked a Strange Champion for Racial Justice,” was not only disappointingly condescending, it was also an extraordinary demonstration of presumption and entitlement.

What gives The Forward the right to tell Black people who is the best racial justice messenger? Clearly, in choosing to highlight Tamika Mallory during his performance of “The Bigger Picture,” Lil Baby believes that he picked a voice that would carry a message not only to the Grammys’ audience but also to President Biden, to whom his segment was addressed.

He has good reason for that belief. Mallory is known as a powerful spokesperson, capable of taking up the mantle of Civil Rights Movement’s most notable speakers. The NAACP called her “an esteemed social justice leader, advocate, and mother” when it nominated her for its Social Justice Impact Award, noting her “explosively powerful speech” in Minneapolis following George Floyd’s murder by officer Derick Chauvin, which “cemented her status as one of the most vital activists of her generation.”

The Forward’s decision to devote three paragraphs to arguing for why Mallory is a “strange champion for racial justice” is just another example of the knee-jerk hostility toward Mallory that emanates from most Jewish media and Jewish organizations. The minute her name is mentioned, there is a concerted effort to demonize her, resurface old accusations and overlook any evidence of evolution. This has to end now.

It is true that, in 2017-2018, when she broadened her activism beyond her primary concerns of anti-Black racism and gun control, Mallory had little understanding of antisemitism and the link between antisemitism and white supremacy, or sensitivity to how pernicious antisemitic tropes are. Since then, however, she has undertaken learning about these issues as a serious, personal project. I know, because I am one of several rabbis to whom, along with organizations like Jews for Racial and Economic Justice and Bend the Arc, Mallory reached out to educate herself, deepen her understanding and build genuine connections with the Jewish community.

I can’t think of many other people who have done as much personal soul-searching and work to educate themselves about Judaism and antisemitism, while putting that learning into action, as Mallory.

After the deadly 2019 attacks on a Kosher market in Jersey City, N.J. and an Orthodox home in Monsey, N.Y., Mallory helped to organize a multi-racial, cross-faith rally of support in Brooklyn’s Grand Army Plaza, and invited key local Black leaders to attend. She is in ongoing conversations with a number of rabbis and other faith leaders to develop a multi-racial, cross-faith social-justice coalition.

As for her racial justice bona fides, Mallory and the organization Until Freedom, which she founded with fellow activists Linda Sarsour, Mysonne Linen and Angelo Pinto, have helped bring national attention to causes including the failure to prosecute the police officers who killed Breonna Taylor and the horrific conditions in Mississippi’s notorious Parchman Prison. Until Freedom did more than just rally around these issues. They brought them to statehouses, while also supporting grassroots organizations working on the ground. In Louisville, the site of Breonna Taylor’s murder, Until Freedom worked at food banks and helped with voting registration drives.

It is because of this admirable history that Mallory was invited to join Lil Baby at the Grammys. It is long past time for the Jewish press and Jewish organizations to stop slamming her. There appears to be an unstated demand that she continuously and publicly beat her breast for statements she has made in the past, along with those she has refused to make, specifically her refusal to condemn Louis Farrakhan. Many are willing to respect Mallory’s refusal, in the face of persistent and systemic anti-Black racism, to throw any Black man under the bus. Others may disagree. But no one can deny Mallory’s selfless commitment to advancing freedom. If that commitment is not the definition of a champion, I am at a loss to know what is.