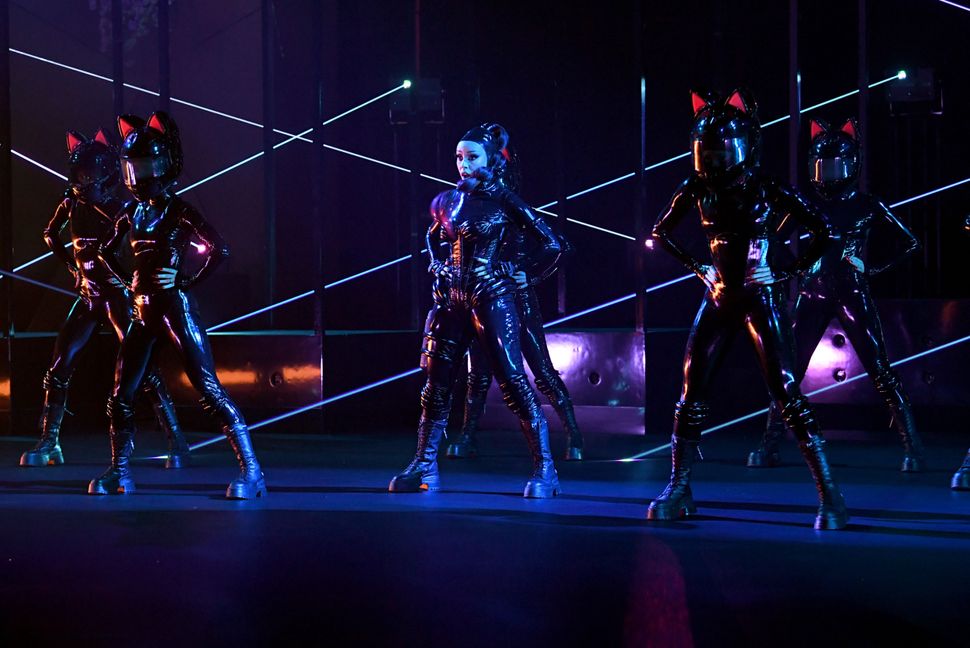 In real life, Taylor Swift dates a Brit known for playing Nazis. But in the fantasy realm of the Grammys, she shacked up in an astroturf-peated A-Frame with boychik producers Aaron Dessner and Jack Antonoff; they went on to win Album of the Year for “Folklore.”

This was just one vision in a strange, socially distant evening that, apart from the glaring issue of some of the main winners, appeared uncontroversial and roundly well-liked. The 2021 Grammys began in a delightful mode, hours before the ceremony — split between a shared stage and a tent outside the Staples Center — commenced.

Tiffany Haddish learned she won Best Comedy Album for “Black Mitzvah” from the set of “Kids Say the Darndest Things.” The comedian was in shock, telling the kids on stage “a Black woman hasn’t won in that category since 1986.” The last winner? Whoopi Goldberg.

Haddish spun her win out into a teachable moment, telling the kids “you just got to believe in yourself as much as you can.”

How I found out I won a Grammy while working on @KidsSayDarndest I am so Honored to share with the kids. Full situation is on my YouTube page. pic.twitter.com/pYzmt4nIgo

Obviously we’re kvelling for Haddish, whose win more than makes up for our discomfort over another preshow win, a choral work called “The Passion of Yeshua,” which seems ripe for the liturgy of Jews for Jesus. The late Leonard Cohen, sadly, did not win for Best Folk Album — but the album was probably miscategorized anyhow.

It must be said that this was a night of great visibility for Jews of Color. While Haddish was the only winner, triple nominee and onetime chatroom troll Doja Cat donned a PVC catsuit and gave a kinetic, laser-filled performance of “Say So.” Trevor Noah, whose mother is Jewish, hosted with a weird kind of aplomb (he was efficient at least).

Bruno Mars brought down the makeshift house, first in Silk Sonic, a fresh ‘70s-inspired ensemble Anderson .Paak, and then a supercharged tribute to Little Richard (who evidently kept the Sabbath day holy).

While Jewish sister act Haim did not win for Album or Rock Performance, they kicked off the night centerstage, harmonizing, sharing a communal drum set and all rocking combat boots and, later, matching cornflower dresses and facemasks. They’ve come a long way from playing for matzo ball soup at Canter’s.

After a performance of “WAP” sure to agitate Ben Shapiro and the pearl-clutching set, the evening entered into a dynamic live performance of Lil Baby’s “The Bigger Picture,” which dramatized the police shooting of an unarmed Black man. The song also included an appeal to Joe Biden to implement policy to push for justice and help end systemic racism from activist Tamika Mallory.

“Accomplices” struck me as a strange word choice (is that really better than “allies?”) and Mallory a less than ideal messenger. Mallory left the leadership of the Women’s March in 2019 following outcry for her refusal to denounce Louis Farrakhan’s antisemitic remarks and it was reported that she told a Jewish leader of the March that Jews “hold all the wealth” and played an outsize role in the slave trade. The last remark was a likely reference to Farrakhan’s “The Secret Relationship Between Blacks and the Jews.”

So, Mallory, who condemned antisemitism in a statement while not distancing herself from Farrakhan, hasn’t always been the best ally herself. Given that fact, a title card from the Recording Academy and CBS that said they “condemn and denounce all forms of racism, sexism, violence, anti-Semitism and hate” looked like a way to hedge liability. Why wasn’t islamophobia included, too? Homophobia? Transphobia? (Of course, Farrakhan, who Mallory called the “GOAT” and appeared alongside many times, also has a special venom for the LGBTQ community.)

Lil Baby’s performance was the most politically audacious of the evening, speaking to the racial reckoning begun almost a year ago. With Billie Eilish’s win for Record of the Year, which Eilish herself believed was a snub of Megan Thee Stallion, many observers were quick to note that the Academy still has work to do when it comes to inclusion.

Beyonce may have made history last night by winning her 28th Grammy, but she has never won the Grammys’ top prize either. For a mainstream artist, it’s alarming how often she has won for genre categories.

And so, the evening was less than perfect. Forgive us if we retreat for a moment to that place in our mind where Swift, Dessner and Antonoff are making merry melancholy in the woods. We need to ask how those three even got there — and what they think of Karlie Kloss and Josh Kushner’s baby.