Quintessential British Actor’s Jewishness Not ‘Gone With the Wind’ 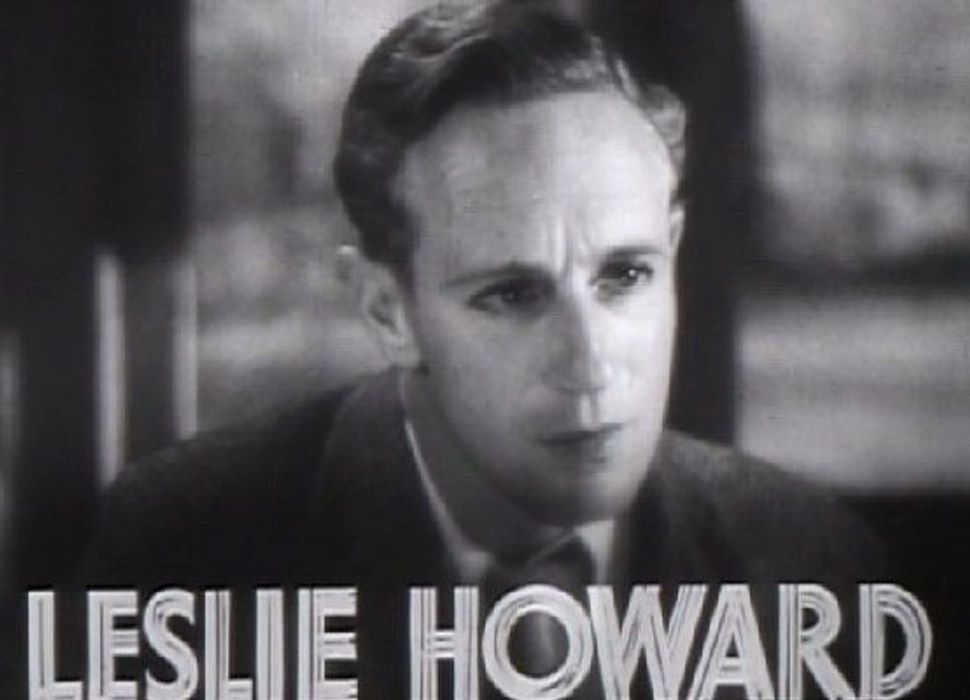 A screenshot from the trailer for ?The Petrified Forest.? Image by Wikimedia Commons

In Portugal in 1943, shortly before his plane was shot down during a wartime propaganda mission, the actor Leslie Howard replied smilingly when he was described as a quintessential Englishman (he even seemed British in “Gone With the Wind”): “I suppose we do not have to tell them that I began as a Hungarian.”

Born Leslie Howard Steiner in London to Ferdinand Steiner, a Hungarian Jewish financier, and Lillian Blumberg, of East Prussian Jewish origin, little Leslie moved with his family at age five to Vienna, where he spent five formative years. Ambient anti-Semitism made the Steiners return definitively to England in 1903. A new biography, “Leslie Howard: The Lost Actor” by Estel Eforgan from Vallentine Mitchell Publishers, explains that Leslie was ordered to forget Teutonic culture, even punished if he dared speak German by being forced to “eat a piece of toast spread with mustard.”

In adulthood, with a strong theatrical and screen career, Howard presciently reacted against the rise of European fascism. Eforgan discounts conspiracy theories which claim that Howard became an Allied spy, underlining instead his overt anti-Fascist propaganda efforts.

In 1934’s “The Scarlet Pimpernel,” an adaptation of Baroness Orczy’s French Revolution novel, Howard and the Hungarian Jewish producer Alexander Korda omitted anti-Semitic references in the original, in which the protagonist disguises himself as an old Jew with the “habitual stoop those of his despised race affected in mock humility.” Instead Howard and Korda inserted praise, not in the original novel, of the 18th century Sephardic Jewish boxing champion Daniel Mendoza. An early proponent of arming England against Fascism, in 1937 Howard tried to enlist the equally hawkish Winston Churchill as script consultant for a never-realized film about Lawrence of Arabia.

Eforgan makes a credible case that Howard’s often-overlooked anti-Fascist films like 1941’s “Pimpernel Smith” (described by Howard’s son as the “most virulently anti-Nazi film ever produced”) are his real legacy, not his overfamous role in “Gone with the Wind.” Seeing “Pimpernel Smith” reportedly convinced Raoul Wallenberg to save Jews from the Nazis, while Howard’s film tributes in 1942, “The First of the Few,” to British aviation, and in 1943’s “The Gentle Sex,” to British women, were equally inspiring. Howard was a fearless fighter to be remembered, like Mendoza.

Quintessential British Actor’s Jewishness Not ‘Gone With the Wind’