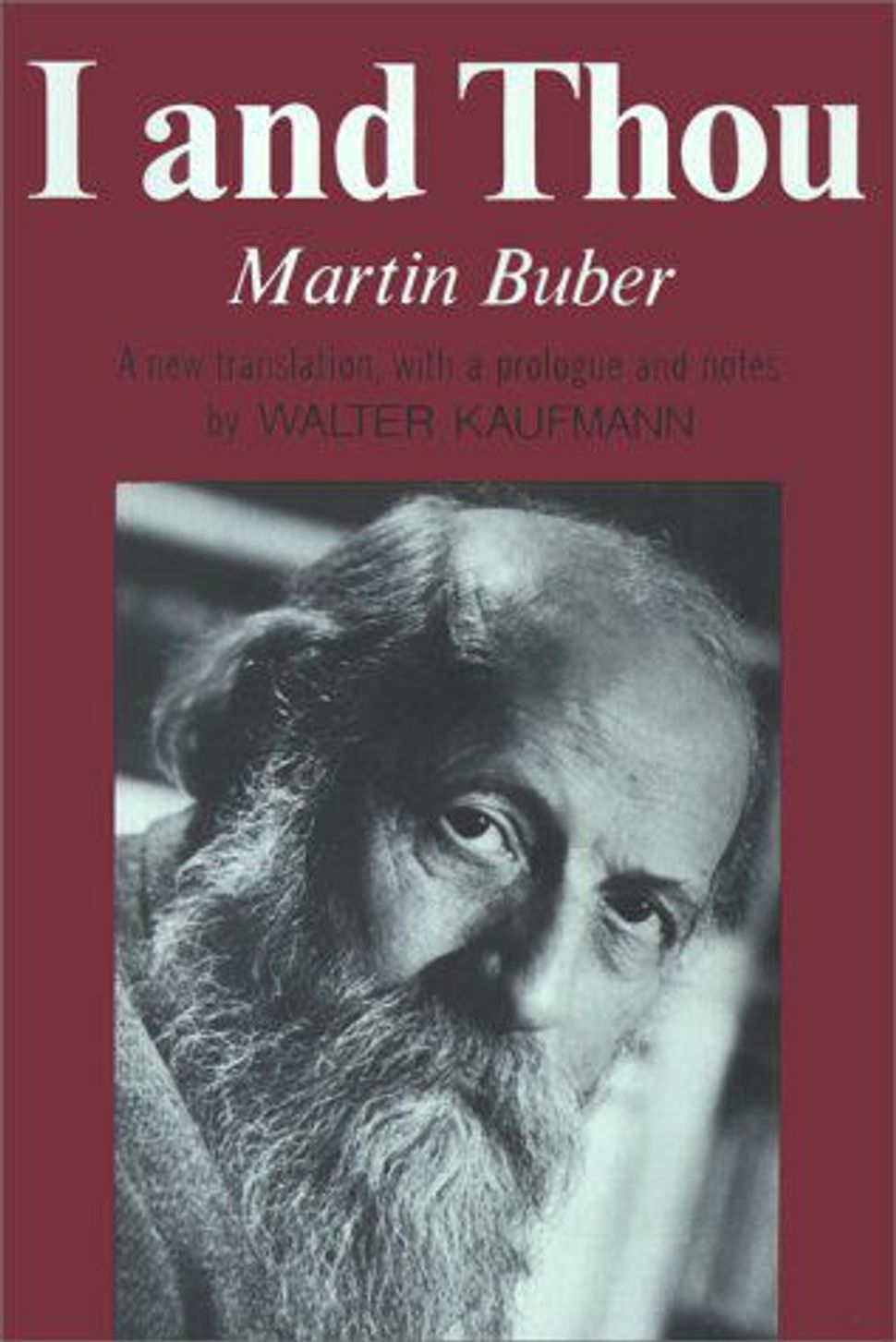 In celebration of Jewish Book Month, The Arty Semite is partnering with the Jewish Education Service of North America (JESNA) and the Jewish Book Council to present “30 Days, 30 Texts,” a series of reflections by community leaders on the books that influenced their Jewish journeys. Today, Jonathan Woocher writes about “I and Thou” by Martin Buber. 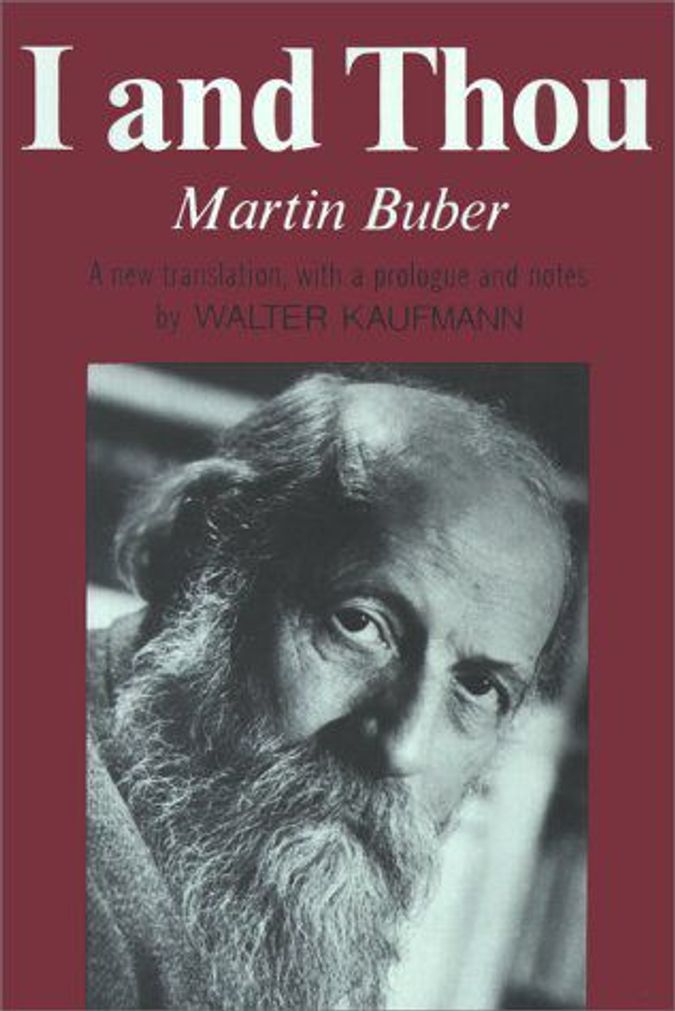 Modern thinkers who are Jewish have tended to fall into two groups: those who have had a considerable influence on Jewish life and thought, but little resonance in the wider intellectual world, and those who have had broad impact on modern society and culture, but contributed little to Jewish life. Among the few who have transcended this dichotomy is Martin Buber, the great German-born religious philosopher, Zionist activist, Bible translator and interpreter, and popularizer of Hasidism, who spent the final three decades of his life in Palestine/Israel.

Although I had been aware of Buber from my teen years, it was not until graduate school that I encountered him and his writing in earnest, guided by Professor Maurice Friedman, one of America’s leading Buber scholars and author of a multi-volume biography (which I had the privilege of working on). Buber’s seminal work is, of course, “I and Thou,” the phrase for which he has become famous, first published in 1923. The total corpus of Buber’s work is, however, enormous and wide ranging, much of it scholarly, some of it polemical, nearly all of it devoted in one way or another to articulating a religious humanist philosophy centering around the concept of dialogue as the key to living a life of meaning and purpose.

I found in Buber a Jewish thinker who spoke to many different aspects of my own concerns and with whose fundamental stance toward a myriad of issues, religious, philosophical, ethical, and political, I instinctively resonated. I wound up writing my dissertation about Buber’s political thought, along with that of Albert Camus, an apparently very different thinker who nonetheless also viewed dialogue as central to human efforts to create just communities without resorting to totalitarian methods. Politically, Buber placed great emphasis on the need to pursue just ends through just means and the forging of communities tied together not only by direct relationships among their members, but by the shared relationship of these members to a common center. Religiously, he focused on the direct encounter of humans with God and the sense of calling and commandedness that emanates from that encounter. Educationally, Buber saw the relationship of student and teacher as the real key to effective teaching and learning. “All real living is meeting,” he claimed, and out of authentic meeting comes meaning and fulfillment.

All of these ideas added up for me to a philosophy that balanced idealism and realism, the communal and the personal, the spiritual and the humanistic, a philosophy that was deeply rooted in Jewish sources, yet addressed the most urgent challenges of contemporary life. I loved the fact that Buber argued against certainty and undue self-assurance in every sphere of life. We live on a “narrow ridge” in “holy insecurity.” Yet, we are continuously driven forward by the possibility of genuine encounter, with other human beings, with nature, with God, and the vision of a perfected world that flows from these encounters, even if they are brief.

“I and Thou” is not an overtly Jewish book (unlike much of Buber’s other writings), which perhaps accounts for why it has been so influential in circles beyond the Jewish world. It is often a difficult book to read and understand, elliptical and elusive. But, the fundamental insight that animates it — that we as humans relate to the world and everything in it in two very different ways, as an object to be experienced, used, assessed, manipulated, etc., and as a presence to be wondered at, delighted by, engaged with, and transformed by, and that it is from the latter that we derive the energy and inspiration to construct purposeful lives — seems to me so profound and so important as to make the slog of reading it eminently worthwhile.

I believe that Buber has often been misunderstood — as a mystic, as an antinomian, as a utopian idealist. He was a deeply religious man, but his religion was very much a this-worldly, humanist one that saw in every encounter with a finite Thou (a real person standing before us) a glimpse of the Eternal Thou (God who can never — legitimately — become an It). His religion was also an activist one, aimed at transforming the world so as to make it more conducive and responsive to the call addressed to us to live in dialogue and community.

As I read more by Buber and about him, I learned about his flaws, both intellectual and personal. I acknowledge the points his critics make — the problematic nature of his interpretation of Hasidism, the one-sidedness of his insistence on following only those mitzvot that he could perceive as genuinely addressed to him, his unrealistic hopes for a bi-national state.

However, then and still today, Buber and his writings transcend these critiques. In “I and Thou” and the numerous books and essays that followed it, Buber articulates an understanding of who we are, how we should live, and how Judaism can provide the scaffold and substance for a noble and worthy life in the service of humanity, the world, and God that I continue to find inspiring and challenging. On my life’s journey along a narrow ridge it is indeed those whom I meet along the way who make living worthwhile, and it is those who are clearly being reduced by our collective actions and indifference to the status of Its who pique a fierce desire to make the world more humane. I don’t know how Buber’s writings will fare in the 21st century — will he still be read in 50 years; is he being read even today?— but I am eternally grateful to have encountered him when I did and to have my thinking and my faith enriched by him.

Jonathan Woocher is JESNA’s Chief Ideas Officer and directs its Lippman Kanfer Institute: An Action-Oriented Think Tank for Innovation in Jewish Learning and Engagement. Jon served as JESNA’s chief professional officer for twenty years before assuming his new role in 2007. In addition to guiding the work of the Lippman Kanfer Institute, he is a member of the agency’s senior management, working with his colleagues on JESNA’s strategic direction, new project development, external relations, and financial resource development. Prior to coming to JESNA in 1986, Jon was an Associate Professor in the Benjamin S. Hornstein Program in Jewish Communal Service at Brandeis University, where he taught courses in Jewish political studies and communal service and directed the program in Continuing Education for Jewish Leadership. He received his BA from Yale University, summa cum laude, in Political Science and his MA and Ph.D. from Temple University in Religious Studies. He has also studied at the Reconstructionist Rabbinical College. Jon is the author of Sacred Survival: The Civil Religion of American Jews. Jon lives in Maplewood, NJ with his wife, Sherry, a clinical social worker at the Jewish Family Service of MetroWest. They have two children, Meredith (married to Peter Sheingold) and Benjamin, and a grandson, Aden. Jon is an active volunteer in his synagogue and Jewish community.