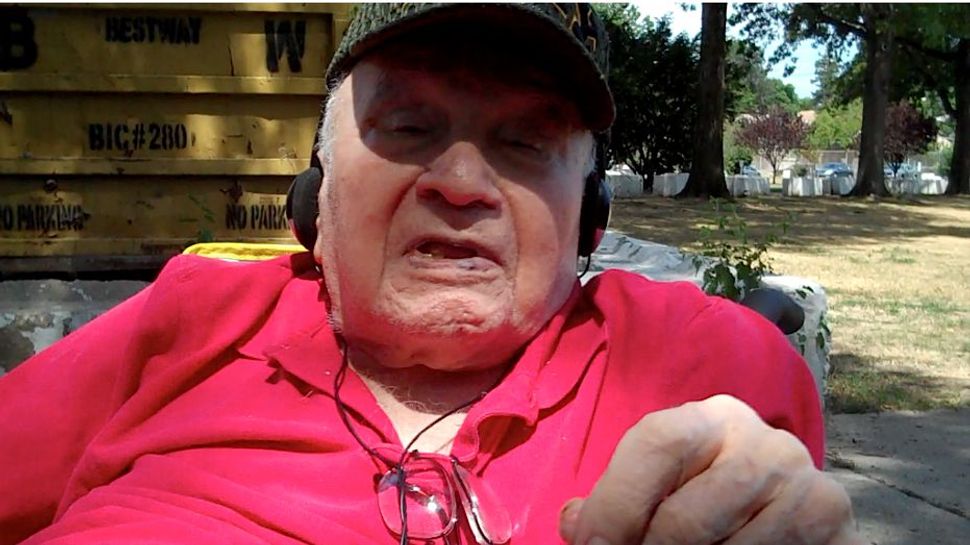 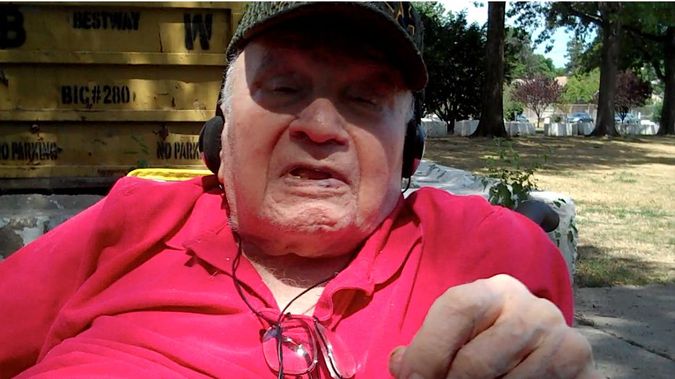 What do Yiddish pilgrims do when they are denied access to the object of their desire? They go see the Lubavitcher Rebbe in the nearby Montefiore cemetery. Maybe it was the spirit of the dead Rebbe who helped us, but back in the hospital we negotiated with a weary social worker and were granted permission for a short visit. Hescheles was lying in bed wearing a hospital uniform. When he saw us he sighed and said (in English): “Oh no. This is not a good day. I have a heart condition and I am 100 years old.”

Encouraged by the fact that he had not lost his sense of humor, we bombarded him with questions about poetry, life, music and Yiddish. The poet nodded wisely. On the way out I showed Hescheles a copy of his book. His eyes lit up with childish mischief: “Many years ago I gave two suitcases full of manuscripts to Dr. Mordkhe Schaechter. There should be enough material there for several books of poetry.” How else would a Yiddish poet wish to be remembered? The Lubavitcher Rebbe has his Hasidim and Hescheles has his poems.

Born in Gline, Galicia (then part of the Austro-Hungarian Empire), Hescheles came from a prominent local family. His grandfather was an accountant for the local Polish landowner and his father, Moshe, owned a tobacco store. The family was Orthodox, but with some degree of openness: Hescheles’s father studied German literature, went to the theater and listened to secular music.

From an early age Hescheles showed musical talent, and was sent to study the fiddle with a local klezmer musician. After graduating from the Jewish Gymnasium of Lemberg (now Lviv, Ukraine) Hescheles enrolled in the Lemberg Conservatory, though he returned home following the death of his father. From 1932 to 1936 he became the kapel-mayster (band leader) of Gline, only to leave for medical school in Italy. He did not graduate and in 1938, when Italy passed anti-Jewish laws, he immigrated to the United States, settling in Brooklyn. A short time after his arrival Hescheles was featured in the 1939 Yiddish talky “The Light Ahead,” directed by Edgar G. Ulmer. In his one minute of glory Hescheles plays the violin, leading a group of klezmorim.

In New York Hescheles was disillusioned with the local klezmer scene, thinking it had “too much clarinet and not enough violin,” so he became a journalist for the Yiddish dailies and wrote poetry. A disciple of Yiddish avant-garde circles, Hescheles excelled in writing highbrow poetry seasoned with Galician spice. In 1957 he published “Sonetn fun tohu-vavohu” (“Sonnets of the Abyss”), followed by “Lider” (“Poems”) in 1963.

“Sonnets of the Abyss” is a masterpiece of poetic erudition: The elegant form of the sonnet is used to bring the world back to bereyshis, beginning. The language is a mélange of folksy Yiddish, archaic Hebrew, modern physics and the classics. In a world that has lost its meaning, the poet restores poetic vigor out of the shards of Western culture.

Hescheles’s tone is sober when he investigates God’s creation. In an untitled poem he asks: “Why do I have wings / If the sky is empty?” The self, facing annihilation from forces far superior to it, disintegrates into space that now, thanks to scientific investigation, we know to consist of infinitesimally small particles. In the sonnet “Microcosm” the speaker hides in his oylem-koten (small world), since “it is better for me in my limited scope (tkhum).” The self is bounded by an eyruv, symbolically the enclosure around a home or a community that allows Jews to carry objects on the Sabbath. In the hands of a secular poet, the concept of eyruv becomes a metaphor for the refortification of the self in a lucid universe.

The poem concludes with the shapeless cosmos from which the speaker creates, like God, a small microcosm that is entirely self-sufficient. The final lines of the sonnet convey that this world is not at all limited: “the small world where I live– / And horizons that sprout with my hovering.” The unlimited horizons of God’s creation are not shaped in the image of man. The mission of the imaginative poet is to create, shape and cultivate a feasible artistic vision. Using the sonnet, substance is turned into form and cosmos into microcosm. In the poetry of Hescheles it is not God who carries man, but rather man who carries God to new, yet carefully balanced human horizons.

The 100-year-old Hescheles has led a fruitful life as a musician, journalist, editor and poet. The suitcases stuffed with poems are safely located at the YIVO Institute for Jewish Research, waiting to be discovered. I would like to dedicate this article to the memory of Hesheles — borekh dayen haemes — and wish the poems, in the words of the famed I.L. Peretz, “Oyb nisht nokh hekher” — “If not higher.”