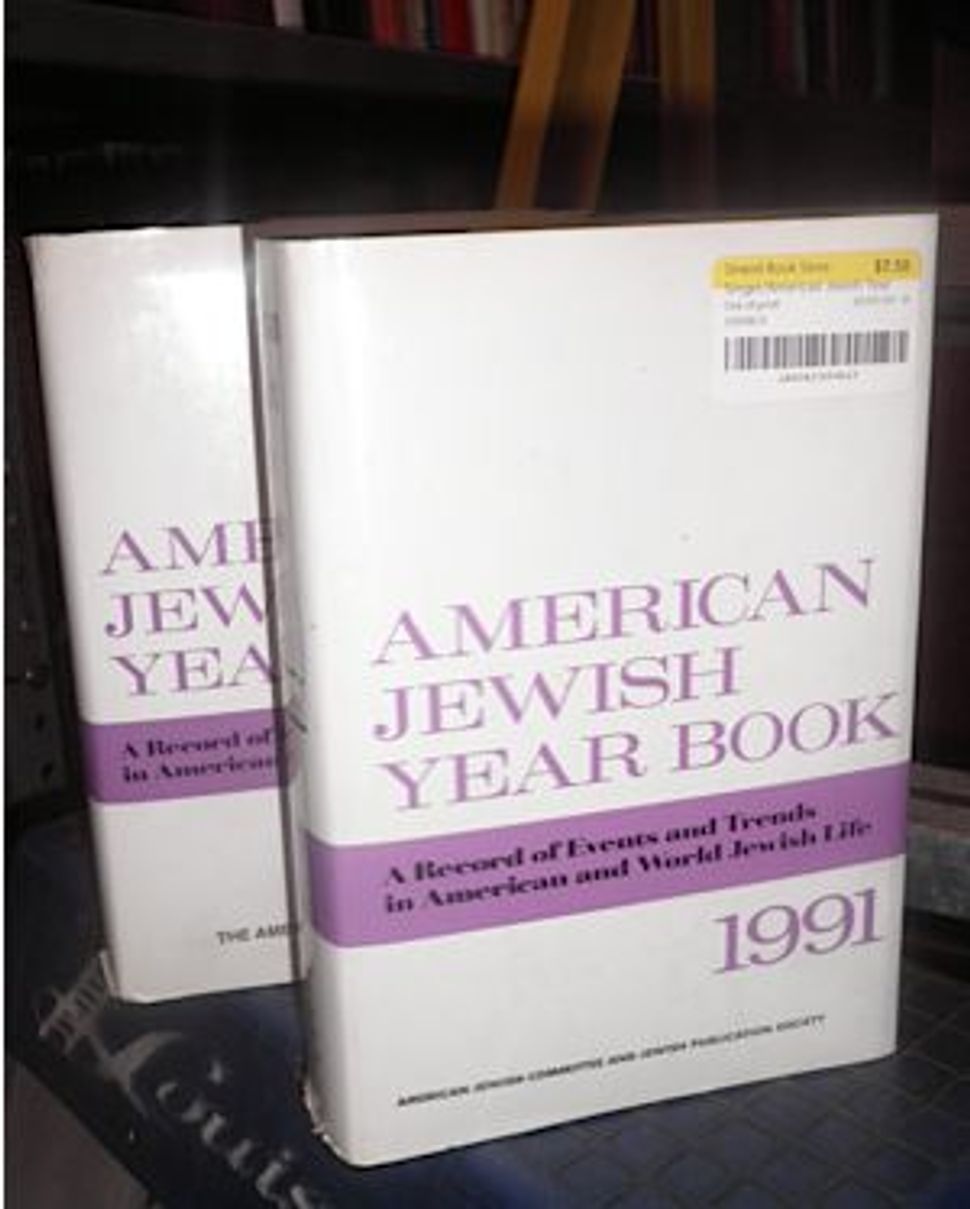 The Yearbook — a handy compendium of demographic and historical trends, global statistics on Jewry, obituaries, and exhaustive listings of Jewish organizations and publications — has lined the bookshelves of major Jewish community executives for decades, immediately recognizable by its candy color-striped covers. The last volume was published in 2008.

But new hope for the publication came in December at the Association for Jewish Studies conference in Washington, D.C., when Ira Sheskin, a University of Miami professor, declared that he and colleague Arnold Dashefsky, a professor of sociology and Judaic studies at the University of Connecticut, were in discussions with the German-founded Springer publishing company to resurrect the Year Book.

Sheskin said the Association for the Social Scientific Study of Jewry already had a relationship with Springer, which also prints Contemporary Jewry, its flagship journal. According to Dashefsky, the proposal would be for the new print version to be published in connection with the North American Jewish Data Bank, based at his institution, the University of Connecticut. “I have the proposal on my desk,” he told the Forward.

At the AJS conclave, Forward contributing editor and CUNY Graduate Center professor Jerome Chanes discussed the untimely demise of these yearly compendia in a talk titled “The American Jewish Year Book: The Prism for Refracting a Century of Jewish Life.” The annual volumes, he said, “tracked what we Jews were doing, what we were thinking, how many we were, how we were worshiping, who hated us, how we were organized, and what issues troubled us.”

“They were the document of record for the Jewish community with the best of the best scholarship in any given area,” he said.

In his talk, Chanes discussed the historic trajectory of the Year Book, beginning with its inception in 1899 and early co-editorship by Henrietta Szold. (He wagered that Szold may have dropped her involvement due to a failed love affair with Jewish Theological Seminary chancellor, Louis Ginzberg, or for financial reasons.)

Chanes said the authors in the Year Books regarded international events such as the Kishinev pogrom through an American angle. The annuals, coursing from anti-Zionism to Zionism, moving from initial quietism to later advocacy for immigration reform and civil rights, sought a solution to communal problems in the social sciences. Chanes cited such watershed articles as “Orthodoxy in Jewish American Life” in 1965 by Charles S. Liebman, and “Jewish Education — For What?” in 1969 by Walter I. Ackerman as examples of the Yearbook’s intellectual and communal impact.

Several conference participants offered reasons for the Yearbook’s demise. “Compared to the period 1950 to ‘80, Jewish communal organizations like the AJC have become de-intellectualized, more insular, and… less interested in pursuing anything too long-term or strategic,” said Barry Kosmin, a research professor at Trinity College, Hartford. “We live in a knowledge economy but the Jewish communal organizations have abdicated their role in it.”

Chanes said that the priorities for AJC shifted from a national to an international emphasis, including combating the de-legitimization of Israel, leaving a “limited place for the American Jewish Year Book.”

Kenneth Bandler, AJC Director of Communications, wrote in an e-mail that publication of the American Jewish Year Book had been suspended “in order to evaluate the best way to offer the content.”

“AJC remains a vital source of information and analysis for the Jewish community, shifting much of its content to online communications vehicles and a robust website, which includes every edition of the American Jewish Year Book since 1899,” he wrote.

If rebooted by Springer, the series might do well to take a livelier tack. Chanes recalled one Year Book editor confiding in him, “Keep it boring. This isn’t People magazine.”