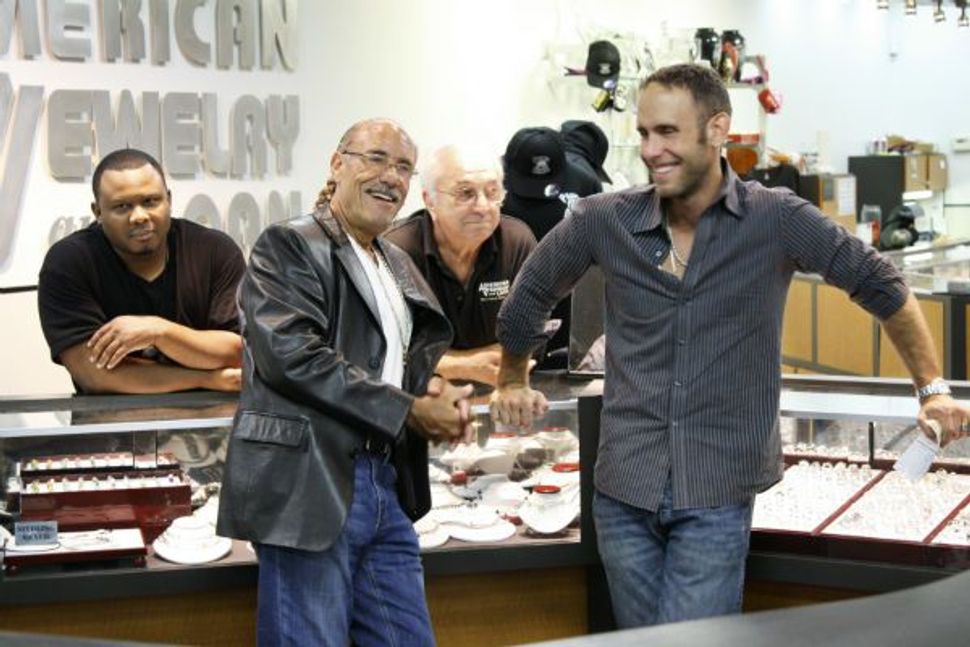 Slow down, guys — “Hardcore Pawn” is not what it sounds like. It’s actually a hit show for the truTV cable network about third-generation pawnbroker Les Gold and his family, and their 50,000-square-foot business, American Jewelry and Loan.

Located in the tough Eight Mile section of Detroit, the business has customers lining up outside hours before it opens, to hock their valuables. The Forward’s Curt Schleier spoke with Gold, 61, and his son and business partner, Seth Gold, 30.

Curt Schleier: How did you get into this business?

Les Gold: My grandfather opened his pawn shop in the mid-’40s, at Michigan and Fifth…. I was 7 years old when I made my first sale.

Did your grandfather or father push you to get into this line of work?

L.G.: I knew I was going into the same business.… It was my decision to open the first suburban pawn shop in A Detroit area [mall], in Oak Park, a normally Jewish area where I was raised as a child…. It was in transition. The Jews were moving out, and the area was changing.

Was it successful from the get-go?

L.G.: No, it was not. I had a 1,500-square-foot facility that was doing four to 15 loans a day. That’s very slow. Now we do 500 to 800 loans a day, and that’s good. We normally do 50 times more loans than we do purchases. Customers bring us objects as collateral. We’re regulated by the state. In Michigan, we can only charge 3% interest per month plus a $1 storage fee. In other states it’s much higher. [Customers] have 90 days to repay the loan, or the title transfers to us. But at 90 days people can come in and pay the interest. We have people who’ve kept items in pawn for five to 10 years.

How do you determine the size of the loan?

L.G.: It’s based on the intrinsic value of the collateral. We’re certified appraisers. We know the value of gold, which we look at on a minute-to-minute basis.

Were you raised in observant households?

L.G.: We were both raised in Jewish houses. I was raised in a Conservative house and was bar mitzvahed in an Orthodox synagogue because my grandfather was observant. Seth was raised Reform.

Do you ever worry that you are playing the stereotypical role of the Jewish money lender?

Seth Gold: I don’t know why that should be an issue. Whether you’re Jewish or not, if you’re in the pawn brokering industry, it’s a business. You just try to succeed in any way you can.

L.G.: Most of the pawn shops in the early days were owned by Jews.

Do any customers hurl anti-Semitic expletives at you?

S.G.: You have to understand that we’re in a business where people can take out their aggressions on us, whether they use anti-Semitic [language] or something else. When people come here, they’re not in a good place. They’re desperate. We can’t take anything people say to heart. We’re in the business to provide a service, and to succeed you have to let that stuff wash off your shoulder.

Watching the show, though, it seems pretty dangerous, with a lot of potential for violence. Are you ever frightened?

L.G: I’ve been in some situations where it’s been kind of heightened. But I’ve never been scared.

Some of the tension on the show is the squabbling between Seth and his sister, Ashley, the company’s general manager. Last season she quit, but now…

S.G.: She’s back. My dad felt with her not in the company was tearing the family apart.

L.G: Here is the issue. Being a father and raising my children the way I have, I realize both don’t like coming in second place. Both want to succeed and be heir to the [title of] president of American Jewelry. But after work, they’re the best of friends.

What are the most unusual items people have brought in?

L.G.: A prosthetic leg. Some guy took out a glass eye and wanted to take out a loan on it. Someone brought in an OB/GYN table. I took a limited edition Lee Iacocca 45th Anniversary Mustang. I actually purchased that.