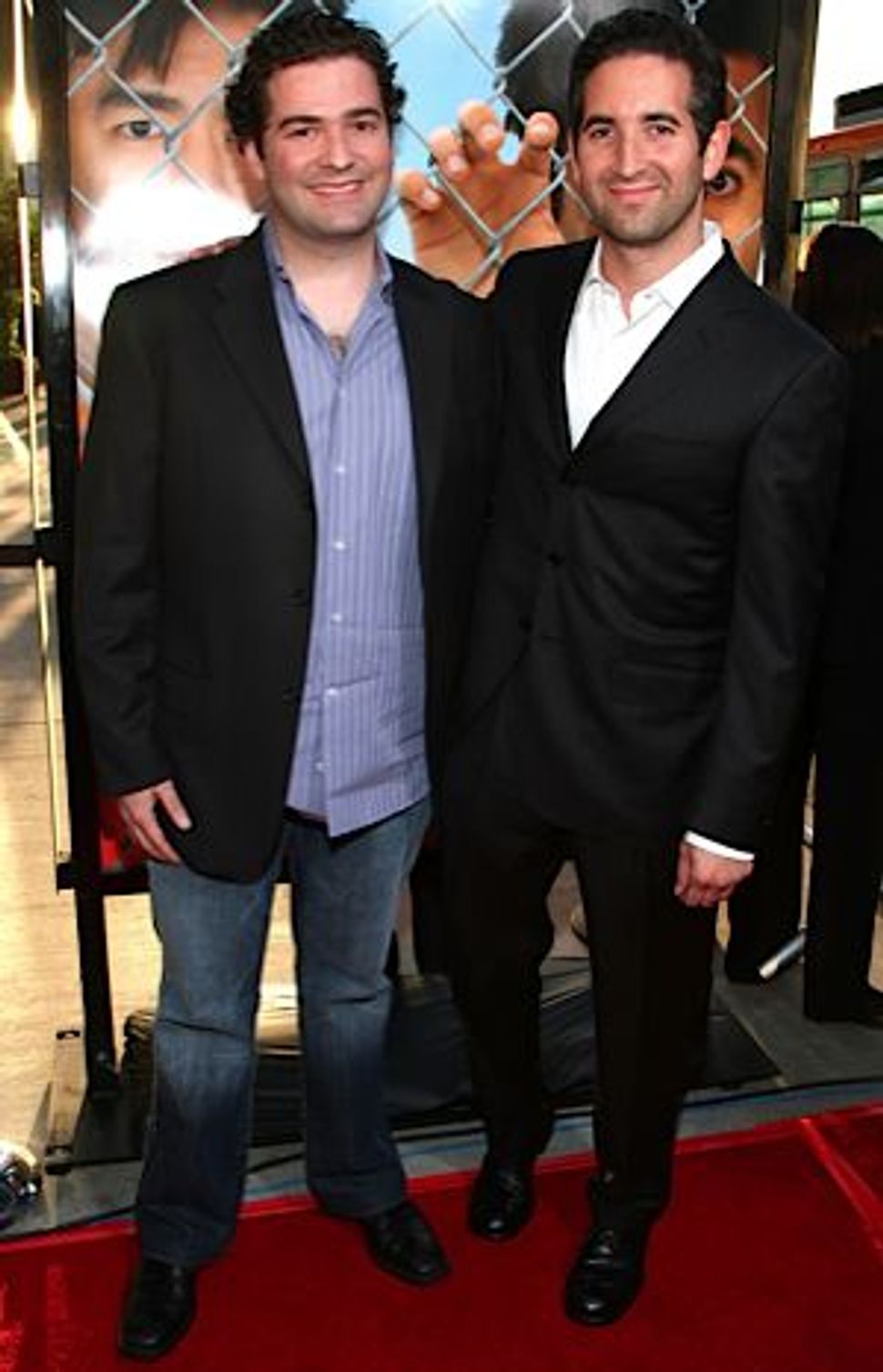 Writer-director pals Hayden Schlossberg and Jon Hurwitz have expectations to live up to. Fans of “Harold & Kumar Go to White Castle” and its sequel, “Harold & Kumar Escape From Guantanamo Bay,” are expecting even bigger laughs from the third installment in the comic duo’s franchise, “A Very Harold & Kumar 3D Christmas,” which opens November 4.

Any trepidation Schlossberg and Hurwitz have is understandable. In their last film, stoners Harold (John Cho) and Kumar (Kal Penn) were imprisoned in and subsequently escaped from Guantanamo Bay. Is that top-able?

The audience will have to decide. In “3D Christmas” the screenwriters bring actor Neil Patrick Harris, who plays himself in the film, back to life and place him firmly back in the closet — he announces it was all a ruse, and he is indeed straight. They have Harold accidentally affix an appendage to a cold steel pole (hint, it’s not his tongue), and they introduce a pot-selling Santa Claus, whom the kids from Temple Beth Shalom keep in business.

The Arty Semite spoke to Hurwitz and Schlossberg about the tallis business, the similarities between Jews and Asians, and making the leap from high school nerds to Hollywood big shots.

Curt Schleier: Where did the two of you meet?

Hurwitz: We became friends in our junior year in high school.

Hurwitz: Well we met on the debate team. If we were nerds, we were nerds with eyes on the prize… We could have gotten tattoos and skipped school and gotten laid.

Schlossberg: We wouldn’t have gotten laid.

Hurwitz: Maybe if we got the tattoos.

Hurwitz: I grew up in a traditional Reform Jewish household. I went to Sunday school, was bar mitzvahed and Judaism was talked about quite a bit in my home.

Schlossberg: Growing up, Jon and I thought Hollywood was this exciting world that was impossible to get into. Now that we’re in it, we see it’s almost all Jews. Show business is almost like the tallis business. The same number of Jews [are] working in the tallis business as are working on screen plays.

What about your upbringing, Hayden?

Schlossberg: I just went to Hebrew school, had a bar mitzvah. No crazy weird Jewish cult. … I’m in that in-between phase now, where I’m out of college, not yet married so I don’t have to be observant. Jon is married and dealing with the issue of finding a temple.

Where did Harold and Kumar come from?

Schlossberg: Harold and Kumar were minor characters in a screenplay. Growing up in Randolph, N.J., we went to school with a lot of Asian kids. We always joked with them that there was no representation of what they were like in movies or on TV. Every Asian spoke with an exaggerated accent or was a martial arts expert. But they were just like us, forced to get good grades and go to college and be doctors or lawyers… So we made an effort in our early screenplays to create characters like our friends. In the first three or four we always had Harold and Kumar.

What was the reaction to that screenplay?

Hurwitz: When our representation saw [the first screenplay] they said it was fresh, with characters you don’t typically see, and that we dealt with race in a manner that didn’t get in the way of the comedy. People saw that there would be a marketplace for this kind of film.

How did Neil Patrick Harris get involved?