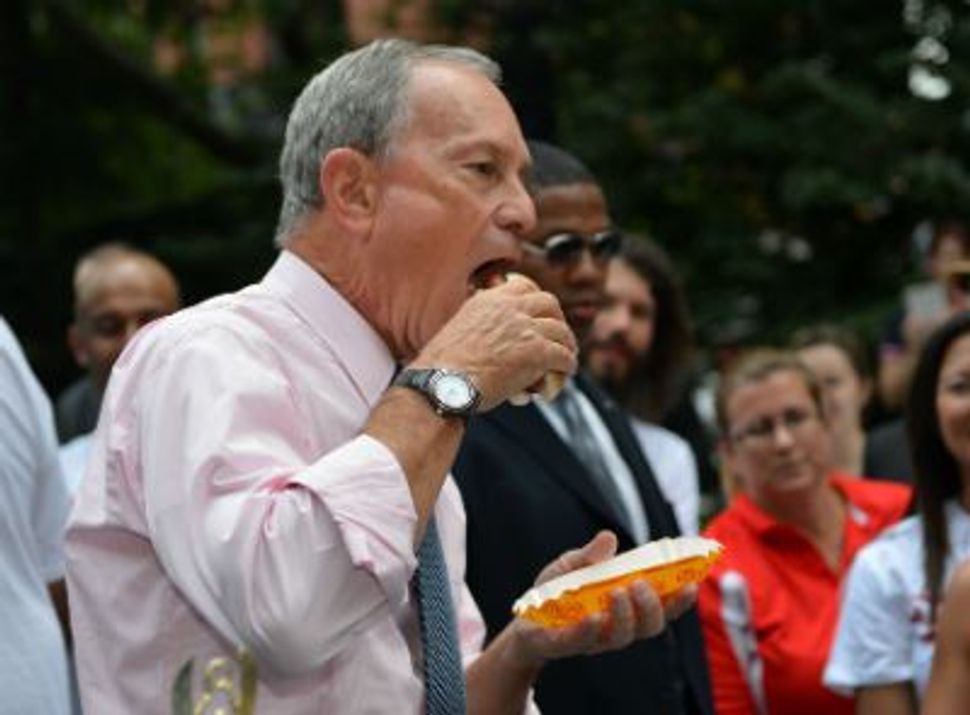 Hizzoner had his audience groaning yet again, and it wasn’t because he banned their Big Gulps. This Wednesday, Mayor Bloomberg presided over the opening weigh-in at Nathan’s Famous July 4 International Hot Dog-Eating Contest. The Mayor read a speech that, according to reports, had even “the stuffed hot dog character face-palming.”

“Dogged pursuers will finally ketchup, cut the mustard and be pronounced wiener,” he said, shaking his head and asking who wrote his punny speech to laughs from the crowd.

The Mayor figured that five-time winner Joey “Jaws” Chestnut would “swallow” the competition and he was right. Chestnut ate his way to a 6th consecutive win by consuming 68 hot dogs, his personal best, but just one shy of controversial Tareku Kobayashi’s record.

Meanwhile, in the women’s arena — the formerly coed contest split into gendered groups in 2011 — Sonya “Black Widow” Thomas took the $10,000 title and yellow championship belt with 45 hot dogs. Not only was it her best, it was also the same number as her age. She told reporters that next year she wants to eat 46 because, “I’m going to be 46 next year.” (That’s 46 all-beef kosher franks, of course.)

The contest is in its 97th year and allegedly originated during a challenge between four immigrants trying to prove their patriotism. These days it draws about 40,000 to Coney Island with another 2 million watching on their TV sets at home.

Bloomberg caught a bit of criticism from the blogosphere for participating in a decidedly unhealthy event after all his talk about the public’s overindulgence in salt and soda. But the Shmooze thinks his appearance at the event was less about the nitrates and more about the celebration of a good old New York tradition.