A (Not So) Brief History of Jews in ‘Mad Men’ 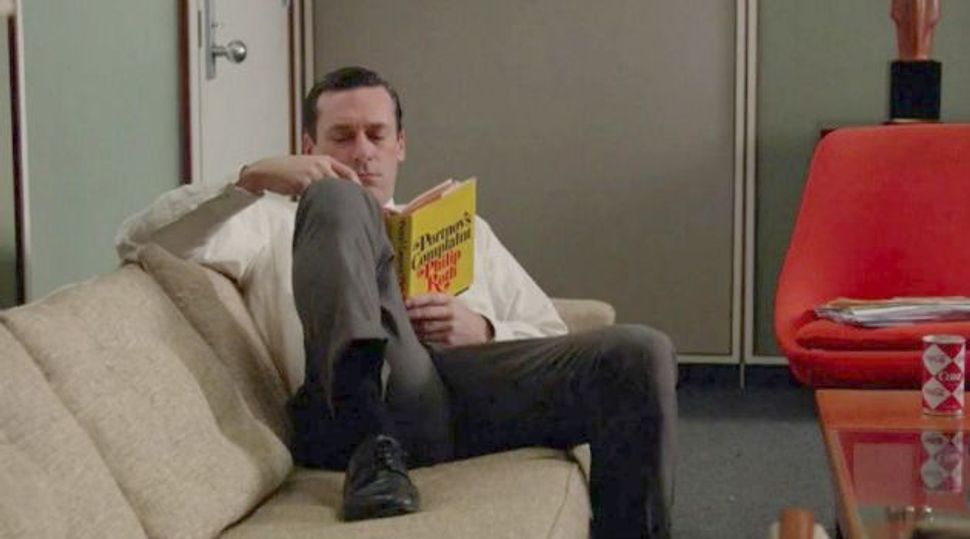 If you’re anything like me, you’re currently anticipating a period of intense mourning: After seven magical, addictive seasons, “Mad Men” is coming to an end. Soon.

Season 7 of the award-winning show may be airing in two parts a la “Breaking Bad,” but it’s a sad reality that by close to this time next year, Don, Peggy, Joan, Roger, Betty, Sally, Pete, and all the other characters we’ve come to know and love (and yes, hate — I’m looking at you, Megan) will be but a distant memory to be revisited on Netflix in moments of nostalgia.

It’s no coincidence that the very first episode includes a rather shocking display of anti-Semitism: We’ve hardly even gotten to know Don when a slick, 1959 Roger strides into his office to ask: “Have we ever hired any Jews?” Don’s deadpan answer is even more revealing: “Not on my watch.”

Almost ten fictional “Mad Men” years later, we’ve come a long way. Sterling Cooper & Partners (formerly Sterling Cooper then Sterling Cooper Draper Pryce, then Sterling Cooper Draper Pryce, Cutler Gleason & Chough) has a full-time Jewish copywriter, the ever-neurotic Michael Ginsberg; Peggy has dated a Jewish man; Roger married a Jewish secretary (and then divorced her), and Don has acquired a taste for Jewish mistresses. The company courts Manischewiz as a serious client (and then gets fired). The Jews have arrived. We are, as it were, the perfect example illustrating Don’s signature line: “If you don’t like what they’re saying, change the conversation.”

And so, in honor of our favorite TV show, we bring you the definitive guide of Jewish “Mad Men” moments.

Season 1: Jews are out

2.”You remember David Cohen from the art department?”

Anti-Semitic and sexist. Good one, Don.

What creator Matthew Weiner refers to as America’s “sophisticated anti-Semitism” is on full view in this scene, in which Sterling Cooper meet with Rachel Menken, owner of a Jewish department store on Fifth Avenue — “Ready to sweet talk some liberal Jews?”

Don and Roger meet with representatives of the Israeli Tourism Ministry, who are looking for an agency to rebrand the emerging country. This leads to scenes of Don reading “Exodus,” and a discussion about Zionism with Rachel Menken, fast on the way to becoming his mistress.

Best line of the episode:

“As far as I can see, the biggest thing this place has got going for it, [is that] the people are good-looking. The Jews there don’t look like the Jews here. Have you been to the diamond district?”

5. Betty’s tells Don about her first kiss (with a Jewish boy!)

“The first boy I ever kissed was Jewish.” Apparently, David Rosenberg, was “very good-looking,” but that there was “something about him that was gloomy.” The two met at a fundraiser at synagogue for “those poor skinny people on the boats.” As for David, he had more practice at kissing than she did. “The only reason he chose me was that I wasn’t part of the synagogue.”

“Grin and Brownstein would be the name of the show if it wasn’t for me,” Barrett’s wife Bobbie lets slip to Don. The two basically embody the trope of pushy Jews in show business.

Mrs. Siegel Sterling doesn’t advertise that she’s an MOT — in fact, she “gets a nosebleed above 86th street.” But fast-forward to her acid trip with Roger in Season 6, and there she is, speaking Yiddish like a pro.

After Duck Phillips gets fired from Sterling Cooper, he goes to work at Grey Advertisement, founded in 1917 by Larry Valenstein and Arthur Fatt. ‘Nuff said.

‘What? Faye Miller is Jewish?’ —  is what went through my head as I came across a Forward blog post from 2010. Well, yes. And I should have seen it coming. Some subtle hints : “Go shit in the ocean.” (English translation of Gai kakhen afenyam). And some not-subtle-hints: “Look at that punim.” Also, she’s a female psychologist in 1965, which as Rachel Shukert pointed out in Slate, was a field “about as Hebraic as the rabbinate.”

Season 5: “Everybody Has One Now.”

Season 5, a.k.a the year Sterling Cooper Draper Pryce hired a Jew. Roger’s sigh of relief upon realizing that Mohawk Airlines will not spontaneously combust when they hear Michael Ginsberg (hear that, berg) will be handling their account is perfect. Jews are now kosher.

13. Ginsberg tells Peggy about his Holocaust past.

Menken’s is all well and good, but the real sign of Jewish success is when SCDP courts Manischewitz as a client. “They make wine for Jews, and now they’re making one they want to sell to normal people,” Roger tells Ginsberg, who he not-so-subtly hires out of pocket to come up with ideas for his pitch. Roger also enlists ex-wife Jane Siegel to translate for the WASPs. Ladies and Gentlemen, we’ve made it. (Fast-forward one season later, when they lose the Manischewtiz account, and you get Bob Benson telling Ginsburg: “They’re good people, they’re your people. They sell wine for religious people of all faiths.”)

Season 6: Jews Are In

“How about a bowl of chicken soup?”

16. Ginsberg goes on a date with a nice Jewish girl

Ginsberg’s father sets him up with “Beverly Farber, Haim Farber’s daughter.” Things get awkward. We’ve all been there.

17. Dr. Arnold Rosen Poor Arnold. All he wants is to find a way to perform a viable heart transplant and save lives, and Don has to go and sleep with his wife.

18. Stan Rizzo has a Moshe Dayan poster hanging over his bed

19. Pastrami at Canter’s
Aww. Pete really misses New York. First he makes Ted bring him back two dozen bagels, then he takes Don to lunch at L.A.’s famous Canter’s deli to have a Brooklyn Avenue (basically pastrami with coleslaw in the sandwich.). (skip to minute 4)

20. Roger gets mistaken for a Jew

“Well the snow’s melted but not the hearts of New Yorkers. Just had some old lady call me a kike. Maybe it’s the hat.”

How perfect is this?

Ok, so not uniquely Jewish, but we just couldn’t resist this GIF.

Until the next half-season!

A (Not So) Brief History of Jews in ‘Mad Men’