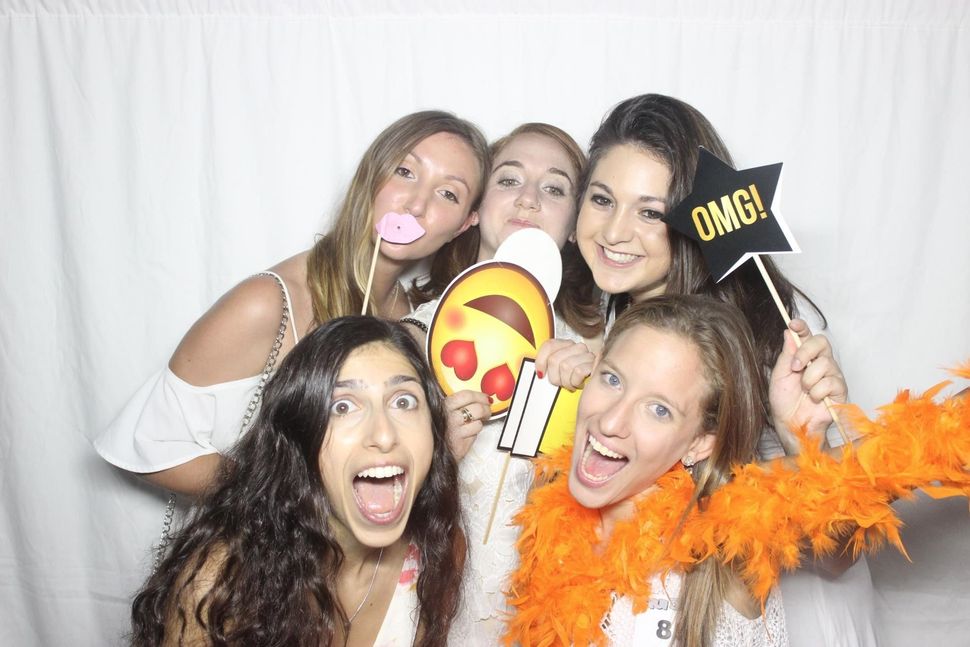 Image by Bang It Out

“You’re the reason people hate Jews!” a man named Mark with impeccably manicured eyebrows screamed at me. I had been at the “Bang It Out: Tu B’Av White Party” for one hour. Things were not going well.

Earlier that evening, hundreds of youngish people in groups of two or three thronged down West 79th street toward the Hudson River – adjacent event space. Dressed in white, the group looked like a racy bunch of Yom Kippur attendees, hopeful about their odds of inscription in The Book of Life.

The White Party is an annual event held near or around Tu B’av, the biblical holiday surrounding the start of the grape harvest with a natural segue into the business of mating. Tu B’Aav has become a minor stand-in for Valentine’s Day in Israel. On the Upper West Side, it is an excuse for a bonanza of outdoor dating, facilitated here by a crude human-numbering technique that invites inevitable, unfortunate comparisons to other numbering in Jewish history.

I picked “1492,” the year the Jews were expelled from Spain, because you don’t turn down a great conversation starter when it’s handed to you on a silver platter. The idea of the evening is to walk around making connections; if you see someone you like, you write down his or her number. If anyone you selected selects you as well, the event organizers get in touch with you and presumably plant 1,492 Jewish National Fund trees in your honor.

The event space was a large outdoor rotunda with an enormous, fairy-lit gazebo at its center and an offshoot area with bars and food stalls. The main event of the evening was to make endless revolutions of the circular enclosure, alternatively making and breaking eye contact with people of your gender of interest, based on snap decisions about their appearance. Essentially, it was not a social event but rather a real-life, instant JSwipe with tons of alcohol and no escape.

“It’s like adult ‘Hungry Hippos,’” the friend who came with me whispered on our third, harrowing cycle around the gazebo. “We’re just waiting to be picked off.”

But first we ran into Hannah, a 31-year-old with perfect curls and a skintight dress, tenderly kissing a chic bald man so passionately that I was sure they had come to the event together. “I almost fell wearing high heels and this handsome man saved me,” Hannah reported. I asked the man, who neglected to be named, what he had come to the event looking for. “Her,” he responded. 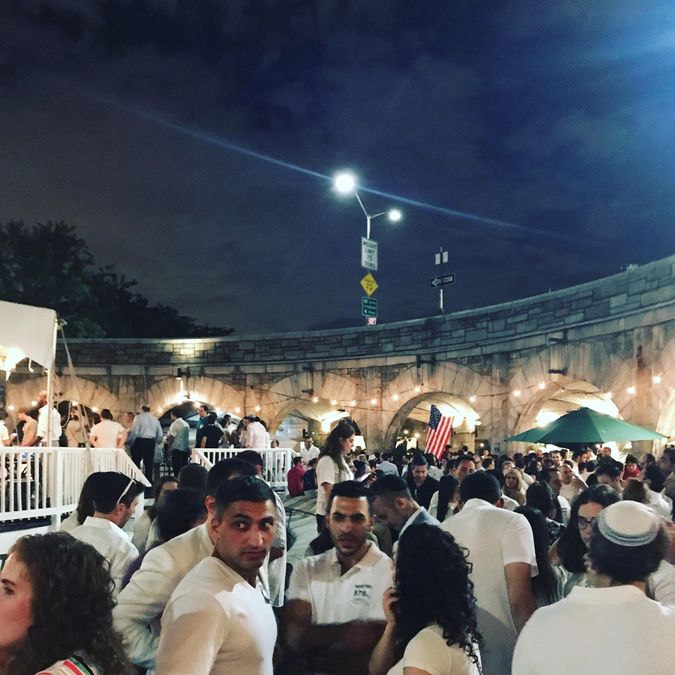 Image by Bang It Out

My friend and I were approached by a man named Benny who was raised Orthodox and came to the event “looking to meet a beautiful girl.” After a few gallantries, he admitted that he wasn’t sure how the event was going for him. “You know how it is — you get some numbers but you never know if they’re too drunk to remember you.” He said he thought the event was a nice mix of religious identities, pointing to a nearby girl and identifying her as Reform. “How can you tell?” I asked. “I know her from JSwipe,” he said. As he wandered away, I noticed Hannah, sans her bald date, now deep in conversation with a young man in thick-framed glasses.

Then along came Mark. Our conversation, unwisely, focused on Israel, the Holocaust and Hillary Clinton. He later apologized for calling me the reason people hate Jews, but he did not, I imagine, write down my number.

He peeled away, revealing Hannah talking to a third, equally attractive man. How did she keep shaking off these eligible men without losing them completely? “Six different guys have gotten my number tonight,” Hannah said. “But if they were looking for something serious, they’d be next to me right now. I’m 31 years old. I came here to get married, not to get f****d.”

As the night wore on, the participants, remarkably, seemed to multiply. We made for the lit-up gazebo, where an Israeli man did a shopping cart motion by himself. A man removed his partner’s beaded beret, put it on his own head, took her number and dipped her. Aside from the reasonably wide range of denominational representation, a significant number of attendees were closer to their 50s and 60s, though they seemed somewhat confined to the outskirts of the rotunda, where JScreen, a group offering genetic testing, was giving away promotional mints. Though older guests seemed alienated, a number of gay and lesbian couples flirted comfortably in the lights of the gazebo. The evening seemed to be living up to its promise of something for everyone. A 27-year-old man from a Conservative background thought perhaps this went too far. “I just talked to a non-Jewish lesbian woman in a monogamous relationship wearing a number,” he complained.

The night ended with burly security guards chivvying out hundreds of remaining white-wearers, determined to kibbitz late into the evening. My friend and I departed in search of pizza, shaking off last-minute attempts to discuss the events of 1492. We waved at Hannah, standing under a street light surrounded by men.