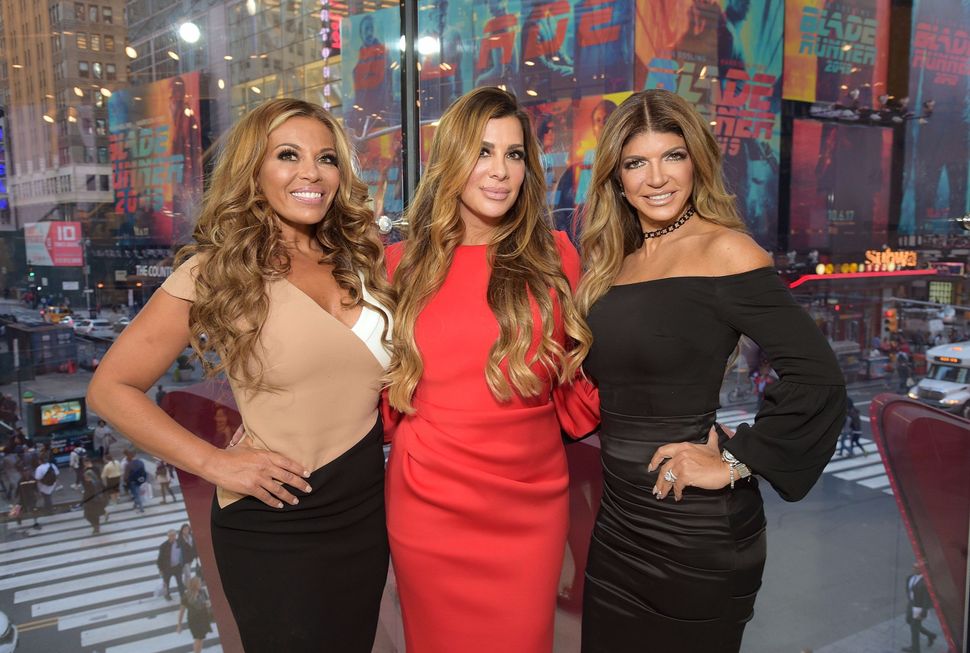 Was Adolf Hitler a good person? No, he wasn’t, and The Real Housewives of New Jersey can all agree on that.

But should non-Jews use Hitler as rhetorical examples to prove points to their Jewish friends who are children of Holocaust survivors? The Real Housewives of New Jersey are split on this question.

Yes, ladies and gentlemen, questions of insidious anti-Semitism and flippant invocations of Hitler have washed up on the shore of the Real Housewives franchise, as all things must do in their season. The very, very convoluted story is this: the Real Housewives of New Jersey were angry because two of their number, including Siggy Flicker, the program’s only Jewish member, had agreed to walk in the fashion show of a designer who allegedly spread rumors about another housewife’s marriage. Flicker explained that she was still willing to participate in the show despite the designer’s possible wrongdoing, because she had never been wronged by the designer. Margaret Josephs, a housewife known for her pigtails (sorry, just reporting the facts,) responded thus:

But Siggy, Hitler would have not killed me. Does that make him a good person?

The sound you just heard was 10,000 Jewish New Jersey women putting down their wine glasses so they can focus on verbally destroying Margaret Josephs, Come on — if your show about wealthy New Jersey Housewives only has one Jew on it it’s probably a little anti-Semitic.

Flicker, whose father Dr. Mordecai Paldiel fled the Nazis a child with the help of a Catholic priest and went on to become a director of the department for the Righteous Among Nations at Yad Vashem, was “in shock” about Joseph’s words. “The fact that she would say Hitler’s name when she knows I’m a super Jew?” Flicker reflected. “My father’s a Holocaust survivor. What kind of person has Hitler on their mind? … I want to call Margaret out about how insensitive it was to reference Hitler when we were talking about a fashion show!”

(It’s worth it to mention at this point that the People Magazine article that alerted me to this story actually spelled the name “Hilter.”)

At a dinner with the whole cast, Flicker took the opportunity to bring up the conversation again. She asked them to admit that the way Josephs invoked Hitler was wrong. “Unless we’re discussing the Holocaust, Hitler’s name should not come up,” Flicker said. “I am the daughter of a Holocaust survivor. It’s inappropriate!”

I am not a regular reality TV consumer, so this feeling of deeply resonating with and rooting for an otherwise bizarre-seeming person is very foreign to me. So was this feeling of a totally unexpected twist taking the drama in a shocking direction: Josephs is married to a Jew and is raising her kids Jewish! “To call me anti-Semitic, that’s a f- -ing bulls- – move!” she snapped at Flicker.

So this is why people watch reality shows. They make you feel so alive and reflective about complex identity politics!

“How dare you say I can’t stand Jews!” Josephs responded, in an exchange that will surely be viewed in 10th grade Hebrew School confirmation classes for generations to come.

The rest of the Housewives refused to help minimize the conflict, like countries that refused to take in Jewish refugees during the Holocaust. “You guys got to stick up for me with the Hitler thing!” Flicker told her friends.

But her friends stayed silent.