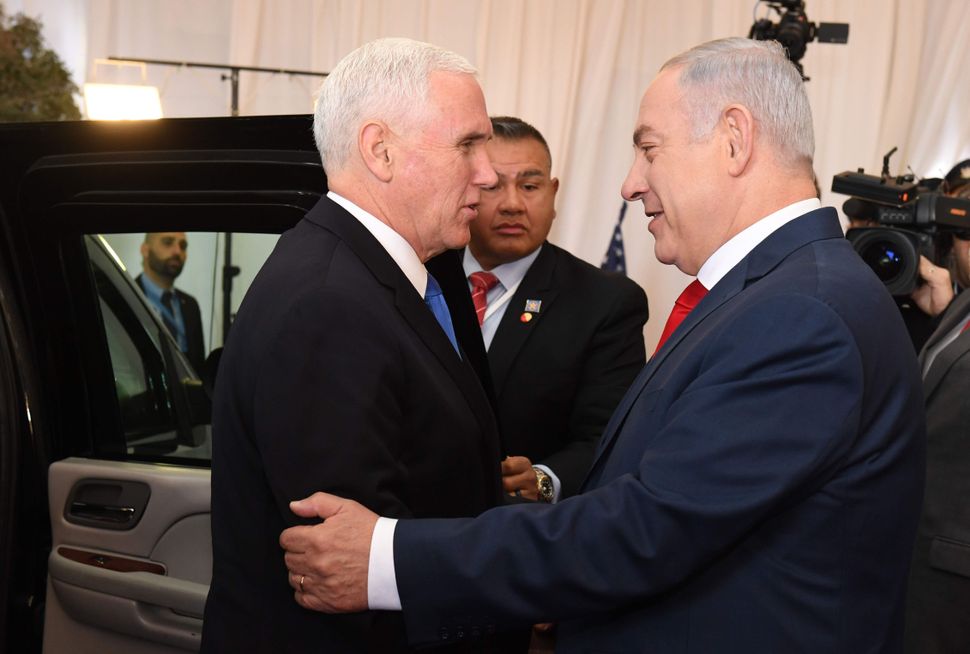 Vice President Mike Pence is midway through a 35-hour whirlwind tour of Israel. The former Indiana governor has been received by Prime Minister Netanyahu, delivered a speech in the Knesset that included a recitation of the shehechiyanu prayer, and eaten dinner with the Prime Minister. In just a few hours he will meet with President Reuven Rivlin, make back-to-back visits to Yad Vashem and the Western Wall, and then he will leave. I have just one question about this itinerary:

When is Israel going to let Mike Pence party?

There is still time to make Mike Pence party

To the distrust of those who call it “pinkwashing,” Israel has staked its reputation on its treatment of gay, lesbian, bisexual and transgender people, and people of other sexual minorities. In 2005 the Israeli Government used gay communities in Israel as part of a rebranding effort to market Israel as a place where there are “cool, hip people.” In 2010 the Ministry of Tourism in Tel Aviv launched a campaign to brand the city as a gay vacation destination. The Prime Minister has frequently invoked gay rights in Israel as emblematic of Israel’s free and democratic society. “Surrounding us are regimes who literally murder you for being gay,” Netanyahu said in a video for Facebook in June 2016, shortly after the Pulse nightclub shooting. While these horrors occur, In Israel “the LGBT community marches with pride,” he pointed out. “Too many people have remained silent in the face of this awful persecution,” he added. And as AIPAC is always fond of saying, Israel is “the leading nation in the region in the protection of gay rights.”

Now, I ask, if one of the world’s most powerful politicians comes to Israel — one who has systematically worked to strip gay Americans of civil rights, who has actively deprived them of legal rights and, to quote our nation’s president (his direct boss),who “wants to hang them all”, is it really still accurate to say that Israel is the best in the Middle East for LGBT rights if it’s not acted on?

If he were a blatant, unrepentant anti-Semite you can bet that the LGBT-friendly Jewish state would lock him in Independence Hall and force him to listen to Hatikvah on repeat, so why not take this anti-gay politician to party in pink Israel?

What I’m saying is this: if Israel wants to prove for once and for all that it is a true beacon of civil rights and equality, and that it does not participate in just pinkwashing but is, rather, a light unto the nations, then Mike Pence absolutely must be taken to a gay club.

Mike Pence must be made to rage. It is the only way for Israel to reclaim its mantle as a gay rights destination. Adding Tel Aviv nightlife to Pence’s itinerary is the clearest way to make the statement to Israel’s critics and to Pence himself that, as Netanyahu said in the video mentioned above, an attack on LGBT communities “is an attack on all of us.”

I want to see Mike Pence dancing to Ivri Lider bops in a Tel Aviv speakeasy as blue and white glitter rains down like snow on Mount Hermon.

I want to see Mike Pence going shot-for-shot with Israeli LGBT rights activist and celebrity Assi Azar, wearing a shirt from the shuk with an iron-on print that says “David Ben Gurion is My Zaddy**”

I want to see Mike Pence running naked through the streets of Bograshov, screaming “Shalom, bitches!” while Dana International plays.

I want to see Mike Pence tanning, hungover, on Hilton Beach, being fanned by 22-year-old combat soldiers who are paid with my tax dollars.

While the area of the Western Wall that Pence will be taken to tomorrow is a partially enclosed men-only space for standing side-by-side swaying and moaning, it does not qualify as a gay club. And, though yes, Yad Vashem is a good place to learn about the extermination of Jews and queer people in the Holocaust, maybe he could allocate some time to visit the gay community center in Gan Meir.

And if he doesn’t have time for a community center visit, the least Pence could do would be to go visit the Israeli street that resembles his last name. Though members of Knesset members don’t think enough of him to even spell his name correctly — “Mike Penes,” or “Mike Spence” anyone? — I believe he would enjoy walking in the street named for the earliest English translator of Maimonides’s “Guide To The Perplexed,” Shlomo Pines, whose name in Hebrew is pronounced like “pee-ness.”

“Regimes and terrorist organizations around the world ruthlessly persecute the LGBT community,” Netanyahu gravely intoned in his 2016 pro-gay rights video. Instead of giving a standing ovation to a leader whose views on gay culture are also deeply intolerant, it is incumbent upon the Netanyahu government to turn Mike Pence’s final hours in Israel into a celebration of gay pride and beachside partying.

**A slang term for an attractive older man.