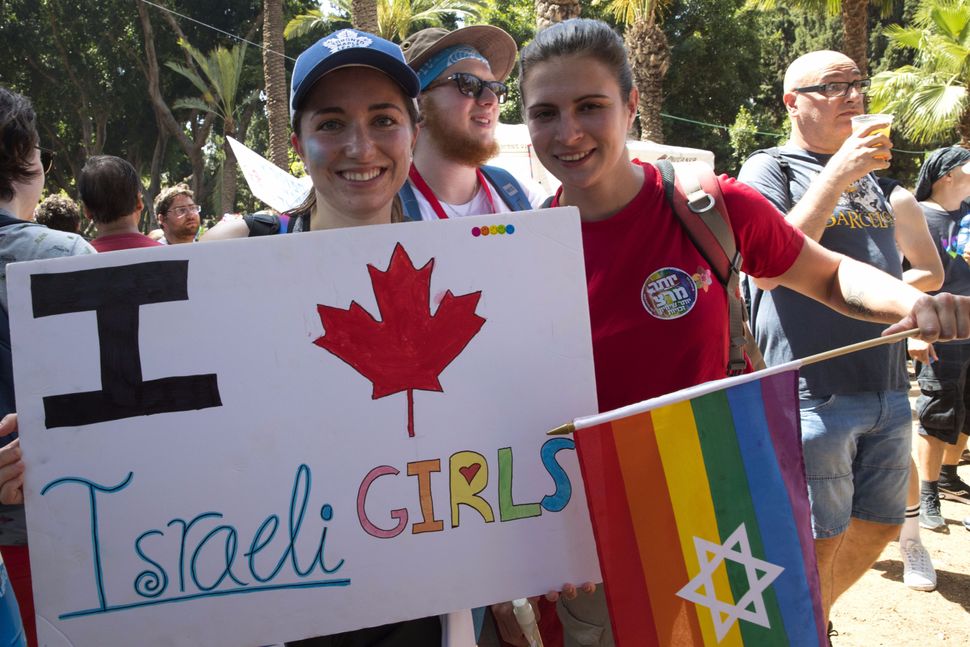 At Bustle, Hannah Simpson writes about her experiences as a Jewish Queer Youth marcher at New York’s Celebrate Israel Parade. Simpson, who is transgender, describes what happened when, as she puts it, “Jewish Voice for Peace (JVP) ambushed and blocked our members under the guise of civil disobedience and protest.” Simpson explains that when JVP members posing as Jewish Queer Youth joint their group, she and others “suspected nothing, because welcoming new faces to into a safe space is precisely the point of the work our organizations do.” Which gets at why, in Simpson’s view, that method of protest was such a problem:

This attack was nothing short of hurtful and terrifying. JVP violated a key tenet of the work Jewish Queer Youth and so many pro-LGBTQ groups do across this country. We welcome new members seeking hope and community through our programming, often before they are “out” anywhere else. We emphasize being open and accepting all who come through our doors. However, thanks to JVP’s violation of this trust, Jewish Queer Youth and other groups nationwide may need to scrutinize new members. Our priority is making our members feel safe, but this attack shows our openness may be abused to put our members in jeopardy.

Simpson’s piece inspired me to revisit a statement “written, edited, and reviewed by queer and trans member-leaders of IfNotNow, including queer members of the Orthodox community.” While IfNotNow is not the same organization as JVP, and was, according to the statement, “not involved in planning any of the JVP-led disruptions of the parade,” the authors “understand why JVP’s queer contingent chose” the method of protest it did:

Queer people are often tokenized in pro-Israel advocacy, a phenomenon commonly known as “pinkwashing.” Israel is presented as gay-friendly to deflect from human rights abuses carried out against Palestinians, while conservatives use this narrative to present anti-Occupation groups as homophobic. Jewish organizations cannot use queer Jews to mask the reality of the Celebrate Israel Parade: progressive groups and marchers were forbidden from mentioning the Occupation, while multiple right-wing groups openly celebrated “50 Years of Judea and Samaria.”

There’s a lot I could say about just this paragraph, including wondering why wishing to protest Israel (including to make points I personally agree with) would think they were entitled to do so as participants of a pro-Israel event. Protesting the event (IfNotNow’s approach, going by their description) to raise awareness of Palestinian suffering, that I understand; protesting an event’s decision not to feature its protestors seems a strange choice.

But what jumped out at me most was the notion that “Jewish organizations” are “us[ing] queer Jews.” Using the abstract concept of LGBT rights, fine (and “fine” as in, it’s not implausible, not “fine” as in, I think that’s what’s going on). But using actual queer Jews? No. Some queer Jews are Zionists. Some queer Jews think Israel is and ought to remain a Jewish state; opinions among queer Zionists on where that state’s borders should lie surely differ, as they do among Zionists of the straight-and-cis variety. Pinkwashing would be if, I don’t know, three LGBT Jews showed up to a Celebrate Israel parade, and then pro-Israel orgs put said three Jews on the cover of all their materials. But it’s not pinkwashing to be a queer Jew and attend a pro-Israel event.

The inherent drawback to the concept of pinkwashing, in this understanding, is that it denies agency to LGBT Jews, treating them as pawns, no people. There’s no reason gender or sexual identity would imply, across the board, any particular position on the Israeli-Palestinian conflict. Some will point to Israel’s record on LGBT rights compared with that of neighboring countries. Others, to Palestinians and queer people’s shared status as marginalized. (The IfNotNow statement notes that queer Palestinians are especially marginalized.) My aim here isn’t to say which of these two views is the correct conclusion to draw. Rather, it’s that it’s misguided — if not exactly bigoted, at least when coming from fellow queer Jews — to suggest LGBT Jewish Zionists don’t show up for a pro-Israel parade of their own accord.