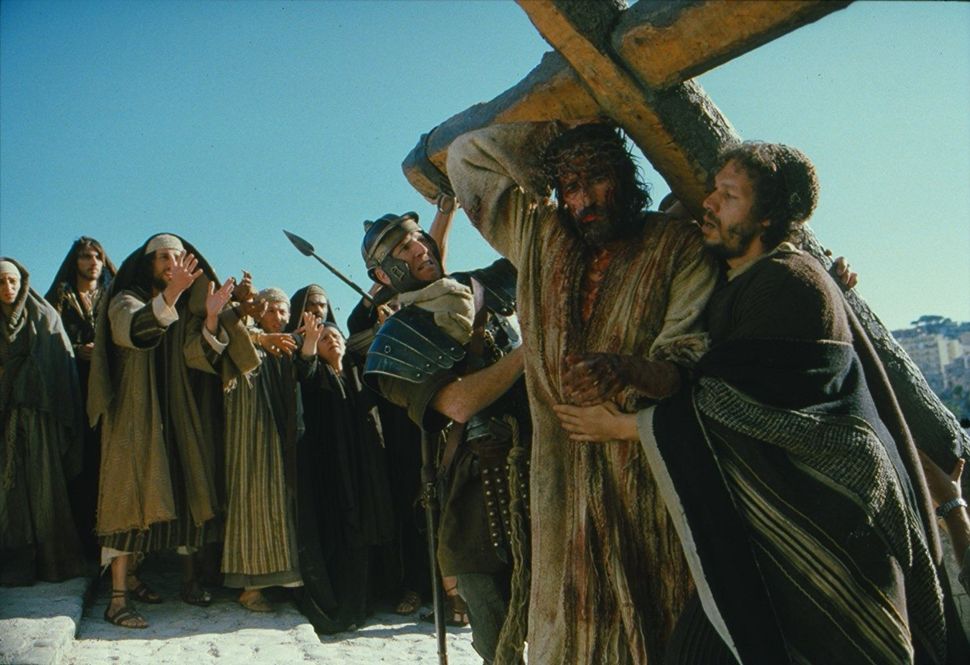 It was a cultural phenomenon that raked in $600 million at the box office and is still the highest grossing R-rated film of all time. Years later people are still questioning just how anti-Semitic “The Passion Of the Christ” really was. Mel Gibson, the star vehicle driving the movie to its bloody, sadomasochistic conclusion, famously refused to hire any Jewish consultants to oversee the film. The Jews in “The Passion Of The Christ” relish their cruelty, kicking Jesus when he is down, while the Romans of the film are shown occasionally behaving with compassion towards Jesus. There was concern about how this would affect inter-faith relations, dismay that the film perpetuated the anti-Semitic idea that the Jews killed Jesus, and a entire ADL Q&A page about it.

Now, Mel Gibson is planning to do it again. Jim Caviezel, the actor who played Jesus in the first film, confirmed to USA Today that he would be reprising his role in the sequel. “There are things that I cannot say that will shock the audience,” he said. “It’s great. Stay tuned.” In a November 2016 interview on The Late Show With Stephen Colbert, Gibson reported that he already begun to work on “The Resurrection,” as he was calling the sequel.

Mel Gibson’s never been the biggest fan of the Jewish people. “The Jews are responsible for all the wars in the world!” he shouted during a 2006 DUI arrest. In 2011, he pled no contest to battery charges against his girlfriend. On his TV apology tour, he confessed that “Lebanon and Israel had been at it that day,” and that “the Jews were not blameless.”

Mel Gibson’s father, Hutton Gibson, is an outspoken Holocaust denier. In 2003, he told the New York Times to “Go and ask an undertaker or the guy who operates the crematorium what it takes to get rid of a dead body. It takes one liter of petrol and 20 minutes. Now, 6 million?” Mel Gibson has never denounced, or acknowledged, his father’s words.

Is the world ready for a “Passion of The Christ” sequel? The polarized political landscape of 2018 is very different from the environment the 2004 blockbuster was created in. Can a movie like this, propelled by the star power of a man known for his anti-Semitic views, ever achieve the same level of worldwide acclaim as its predecessor?

“I don’t understand why after 10 years it’s any kind of issue,” Gibson complained to Variety recently. “I’ve also been around long enough to recognize that Hollywood will welcome back just about anyone that might bring in a dollar,” Joshua Malina, West Wing actor and one of Gibson’s most outspoken critics, told the Post.

“The Passion Of The Christ” established that there was a market, both American and international, for religious oriented films. It practically created that market when it received a slew of endorsements from a who’s who of American Christians, including a disputed one from the Vatican.

Will Gibson market his films at evangelical Christians, newly empowered in the Trump presidency, and run the risk of alienating more moderate and liberal viewers?And more importantly, in this era of increasing anti-Semitism and hostility towards Jews, does the world need “The Resurrection” at all?

Shira Feder is a writer at the Forward. You can reach her [email protected]