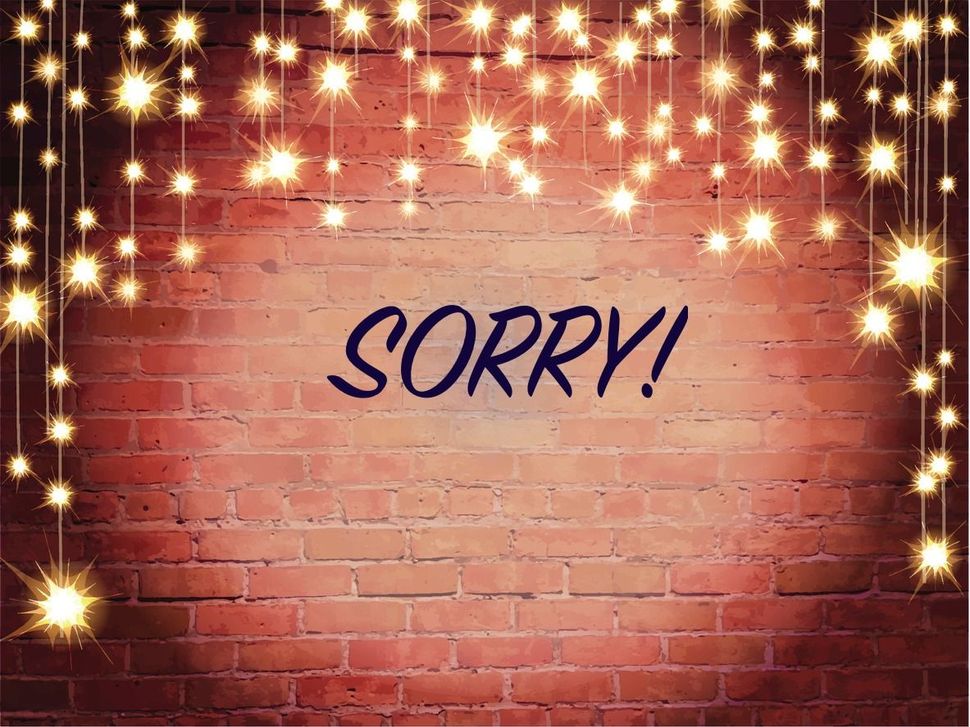 Sorry ‘bout it. Image by iStock

I learned about the all-Jewish comedy show “LOL Nidrei” just hours before it occurred. Yet I was determined to face any water, fire, storm, wild beast, famine, or thirst in my way to get there.

My reasons follow:
1.Much like a gift horse, you don’t look an Aramaic pun in the mouth. You accept the opportunity. And you can just tell that whoever came up with the pun “LOL Nidre” has a fraught relationship with their mother, which is likely to lend itself to comedy.

2.I’m ready for the American public to admit that Jewish humor doesn’t have to be an old man with a thick Brooklyn accent talking about bagels, and if that means paying a two-drink minimum on a Thursday night to hear jokes about the machzor, take my money.

3.I saw that a man I once went on one date with was on the lineup of performers and I thought it would be a hilarious coda to that date if I sat in a shadowy corner secretly watching him perform. I believe that social awkwardness is something you should run towards with open, crazed eyes.

“LOL Nidre: Unforgivably Naughty Jewish Comedy” took place at The Duplex, a historic West Village bar and comedy club where Joan Rivers and Woody Allen performed in their early days. It’s a small club, and it felt smaller when it filled with Jews. The crowd was different than one typically sees at comedy clubs — near me a distinguished older couple in crisp pastel sweaters sat down, ordering a bottle of wine. I sat in front of a bachelorette party of about a dozen women who graduated from Brandeis last spring.

It was two days before the wedding, and they seemed as thrilled to be in a comedy club for an atonement-themed night as other groups would to be running topless down the beach of St. Tropez. The bride, they said, had wanted to see comedy at her party, and they knew Chani Lisbon, one of the comics. “As long as there are no Holocaust jokes, it’ll be fine,” one of the women told me. I told her I would expect no fewer than five Holocaust jokes, and the group looked alarmed.

They broke into a conversation about whether “LOL” is pronounced like law-l or low-l, and whether it rhymes with the “kol” in Kol Nidre. Two Orthodox women sat down next to me — they turned out to be Chani’s sister in law and her friend. They asked the waitress if the bar served “soft drinks.” We quieted as the evening’s host, billed as the night’s “token Boston Irish Catholic,” took the stage. She mentioned Brookline, and, to her surprise, the Brandeis Bridesmaids broke into screams of joy.

The man I went on a date with came on stage. He looked cute and Jewish and referenced Rachel Maddow. Oh no! I thought. Should I regret saying no to a second date? Was this a real-life version of Avril Lavigne’s “Sk8er Boi,” in which the girl realizes she was a fool not to stick with Sk8er Boi? The guy I once went on a date with made a joke that elicited no response except from a woman in the front row who laughed appreciatively. Pointing at her, the boy shouted something like, “Look! Even an Asian is laughing! Good — you’re learning our people’s ways.” The laughter died on the woman’s face, and she looked up at him, surprised and hurt.

The audience was diverse in its way — old, young, and middle-aged, secular and Orthodox, queer and straight, and very Jewish — and uniformly silent through the rest of this person’s set. It was both magnificently socially uncomfortable and also heartwarming that the entire, very Jewish room refused to get back on board with this person’s jokes. I think the very simple lesson here might be: Don’t point at an audience member and announce her ethnicity, as if suggesting that she doesn’t belong. Ah, well — yet another tragic but glaring piece of evidence that men aren’t funny.

But women are! The famous Chani appeared finally, explaining that after losing her hair to an illness she had begun donning wigs — until she realized they gave the impression that she is a married Orthodox woman. “I would rather people think I’m dying of cancer!” she said. And then, before the crowd could laugh a little too hard, she added, “If I’m wearing a wig, people will think I’m taken and then I’ll never get married.” At one point Chani, who was raised Orthodox, got a laugh just by listing the names of her 11 siblings. She was followed by Cher Landman, her creative partner, whose bits about being Jewish and Texan were painfully funny. Dana Friedman, the comic who produced the show, explained to the audience that she is a trans woman. “On my bar mitzvah,” she recalled, “I stood before the congregation and said, ‘Today, I am a man. Tomorrow…meh.” She continued to triumph with uncomfortable-in-all-the-right-ways jokes about trying and failing to seduce her rabbi.

“And now, your headliner,” the host announced. I cannot describe the satisfaction of seeing a grumpy-looking brunette woman in thick-framed glasses take the stage after the words “comedy headliner.” It was Jess Fleischer, a woman who went to Manhattan’s chi-chi Orthodox day school Ramaz throughout her formative years, followed by Harvard, followed by a PhD program. Almost all of her jokes were about abortion, except occasionally when she took breaks to discuss the Holocaust.

She was so funny I thought I was going to be ill. The Brandeis Bridesmaids kept interrupting her set to scream mazal tov and ask for Orthodox day school gossip. When she joked that the Nazis would have taken out more Jewish men if they had teamed up with a Jewish woman nearing 30 (“I can smell them! There are four of them nearby! One’s over 5’11’’,” she shouted) the room quieted, except for one female reporter who was cackling loudly. “For the first time in my life I’m making a group of Orthodox people uncomfortable, not the other way around!” she beamed.

Fleischer finished her set with jokes about the concept of Kol Isha, the prohibition of a man listening to a woman’s singing voice. The women in the room laughed. It was the opposite of a performer pointing at you from a stage and announcing your ethnicity. The gates of repentance are always open, I guess, but the gates of the Duplex are open every night, if you can commit to the two-drink minimum.