What Hunter Biden’s memoir tells us about Melissa Cohen, his Jewish wife 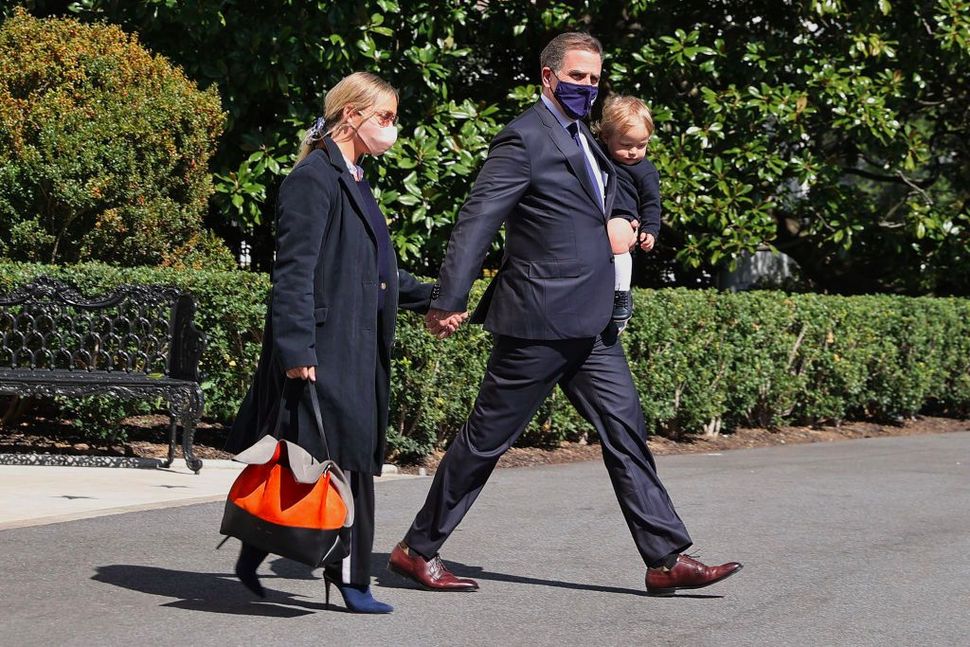 Hunter Biden and Melissa Cohen depart the White House in March with their son, Beau. Image by Getty

First and foremost, it’s a love letter to Hunter’s brother, Beau Biden, who died of brain cancer in 2015. The book starts with a recollection of Beau’s last moments, and ends with the 2020 election and the birth of Hunter’s son, whom he named after his oldest brother.

It’s an unvarnished account of Hunter’s years of substance misuse and his behavior as an addict, and a glimpse inside a political family whose steadfast support of its prodigal son is one of its most compelling qualities.

It’s also a brusque dismissal of all concerns about Hunter’s involvement Burisma, a Ukranian natural-gas producer whose board he joined in 2014 with seemingly no qualification except being the son of America’s then-vice president. (“I did nothing unethical, and have never been charged with wrongdoing,” is most of what Hunter has to say on the subject.)

And it gives new insight into Melissa Cohen, the South African filmmaker Hunter met at the depths of his addiction and married days later. Since joining the Biden clan in 2019, Melissa has deleted her social media kept a low public profile — some of her first public appearances came during inauguration festivities. Here’s what “Beautiful Things” told us about her. 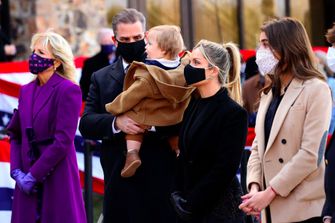 Melissa Cohen made some of her first public appearances ahead of the 2021 inauguration, as did baby Beau. Image by Getty

She grew up in Johannesburg.

In “Beautiful Things,” Hunter gives us an overview that is perhaps purposefully broad. As a toddler, he writes, Melissa lived in a “children’s home” for a year before being adopted by a Jewish South African family with three sons. He notes that she’s fluent in five languages including Italian and Hebrew, and describes his wife as an “activist” and “aspiring documentary filmmaker.” Melissa was briefly married to Jewish Los Angelean Jason Landver, and met Hunter just after ending another two-year relationship — on the day of their first date, she’d just returned from visiting her brother to recover from the breakup.

When they met, Hunter was at a breaking point.

In 2019, with Hunter deep in the throes of his cocaine addiction, the Bidens staged an intervention, confronting him at the family home in Delaware. Hunter agreed to check himself into a rehab facility; but as soon as Hallie Biden (Beau’s widow, with whom Hunter had a brief relationship) dropped him off in the lobby, he hopped in an Uber and boarded a plane to Los Angeles. There, he lived in a series of hotels, occasionally getting blacklisted for receiving guests in the wee hours of the morning or leaving drug paraphernalia out for staff to see. Any efforts at recovery seemed futile. “I was a crack addict and that was that,” Hunter writes.

At the same time, Rudy Giuliani was making a series of “unhinged” accusations of corruption over Hunter’s involvement with the Ukrainian natural-gas producer Burisma. Hunter was worried that his business dealings and inevitable revelations about his drug problem would affect the 2020 campaign. So when New Yorker writer Adam Entous called, looking for the truth about the Burisma situation, he saw an opportunity to clear his name and preempt future negative press. But interviews for the piece, which turned into a deeply personal profile, became a kind of therapy — and, Hunter believes, primed him for a new beginning. “I honestly believe I would not have been capable of seeing Melissa for what she would become to me if I hadn’t explored my most meaningful relationships during those interviews.”

Melissa ghosted him — sort of.

The Biden-Cohen meet-cute sounds less like an event in the life of a political scion than a plot point in a dramedy about a political scion. Just after getting the boot from the Petit Ermitage, a swanky Los Angeles hotel, and while sitting on the rooftop pool figuring out where to go next, a drunk and high Hunter struck up a conversation with a group of hipsters, who all seemed to think that he needed to meet one of their friends: Melissa Cohen. Late that night he texted her, asking to meet up for drinks. She countered with an offer to meet for coffee the next morning — but didn’t show up until dinnertime.

Hunter describes his first glimpse of Melissa, who arrived with “oversized sunglasses pushed atop her honey-blond hair,” as a “bell-ringer.” Within a few minutes, he told her she had the same blue eyes as Beau, his brother. Then, he announced he was in love with her. An hour later, he confessed to his drug addiction.

Melissa, in his recollection, was unfazed. “Not anymore,” she said. “You’re finished with that.” 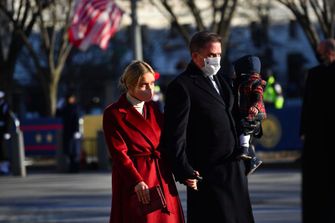 The family on Inauguration Day. Image by Getty

She helped him kick the addiction.

“Beautiful Things” details a slew of rehab programs that never quite worked. Instead, it took Melissa’s care to catapult Hunter into his current sobriety. A day after meeting him, she disposed of all his drugs. She confiscated his car keys, wallet, computer, and phone, deleting all contacts except immediate family members. When drug dealers knocked on the door, she “turned to steel” and dispatched them unceremoniously.

After a difficult period of withdrawal — Hunter doesn’t specify how long this lasted, but credits Melissa with putting up with “my whining and crying and scheming” — he slept for three days. On the fourth day, Hunter popped the question “like a trial balloon, light and breezy: ‘We should get married!’” That night, the two visited destination tattoo parlor Shamrock Social Club, where Hunter got the tattoo the Schmooze can’t stop talking about: The word “Shalom,” inked on his left bicep, which matched one of Melissa’s preexisting tats.

The Bidens welcomed Melissa in.

“Shalom” tattoos tend to usher in major life decisions, and the next morning Hunter and Melissa decided to get hitched — that day. Wedding preparations were slapdash: Hunter located a “marriage shop” and paid its owner to hurry to Melissa’s apartment in rush-hour traffic. Yet, he said, there was no sense of haste: “The decision never felt rash or harebrained or reckless. It felt urgent. I felt like I’d been given a reprieve.”

Before starting the ceremony, Hunter called his father to give him the news. It was the first time anyone in the family had even heard about Melissa, so we have to give the elder Biden kudos for his poised response. “Thank you for giving my boy courage to love again,” he said, echoing the words with which his own grandmother had welcomed Jill Biden into the family.

What Hunter Biden’s memoir tells us about Melissa Cohen, his Jewish wife