Not long ago, I arrived in a small corner of Eden in rural western Pennsylvania: a bit of forest, a burbling brook, manicured lawns and camp-style wooden cabins and lodges.

Displayed in and around the main lodge was all that a young child might desire—charmingly wrought sand tables and water tables, a small play kitchen, light tables and toy pieces specially designed to be lit up underneath the tables. Dozens of brightly colored children’s books lay about, as did arts and crafts supplies, and everywhere you looked — pomegranates.

The pomegranate, with its thousands of seeds, is the emblem of the Paradigm Project, the brainchild of pedagogical innovator Anna Hartman, who strives, along with her collaborators, to “shift the paradigm” in early childhood education.

Their aim is to remove the academic pressure on young children to learn reading and writing, and instead to create a pedagogy based on the principle that “the work of childhood is play,” which is to say that children learn more thoroughly by playing than by other means. Today this educational approach attracts enthusiasts ranging from the liberal denominations of Judaism to Chabad Lubavitch, which subscribes to the verse in Proverbs (22:6), “Teach each child according to his (or her) path.” Hartman had invited me to the third annual conference because of my research on Yiddish children’s literature. Thus did I find myself for a couple of days in a veritable wonderland for children with about two hundred educators from across a wide band of the American-Jewish ideological spectrum. The theme of this year’s conference was “Messing Around,” a pedagogical theory promulgated by David Hawkins that stresses the importance of allowing children to use their natural creativity to learn about the world, through giving them “loose parts” that they can manipulate, transform, take apart and reconfigure.

I had come to the realm of early childhood pedagogy as a guest, albeit a curious and enthusiastic one. I was glad that my first session was together with a veteran pedagogy professor, Diane Kashin of Toronto. She spoke about forest education and how much children can learn from playing outdoors. Simple techniques can yield significant results. For example, children can choose a “sit spot” in the forest, where the environment changes from season to season, and revisit it several times over the school year—sitting quietly, observing their surroundings, sketching or just listening to the forest sounds. Such activities cultivate children’s ability to learn about the world—which is true for adults as well.

Kashin’s presentation concluded with a practice exercise (how could it not?) that involved collecting loose parts in the forest and making our own “small world” out of them. After that, I told the group about Kadya Molodowsky’s (1894-1975) schoolboy stories (kheyder/cheder stories) in her 1970 collection for children, Marzipans. We focused on the story “Zelig the Rhymester,” which is about a group of boys who follow the lead of their friend Zelig in trying to catch Elijah the Prophet during the one night of the year when he “rides across the sky in a chariot pulled by four starwheels.” The prophet is out to see for himself whether the world’s Jewish children are reciting the bedtime Shema prayer with proper concentration. The kids in the story run around carefree and unsupervised, even at night. They have a fluid, if complicated, relationship with the natural world. With the other educators in the audience, I discussed how those schoolboys’ experience of nature differed from contemporary American childrearing practices, and how Molodowsky’s imaginatively reconstructed Eastern Europe might be useful to today’s educators.

Molodowsky’s story is just one of dozens that I’m translating into English as part of a forthcoming anthology of Yiddish children’s stories and poems. I always find it interesting, when teaching Yiddish children’s texts, to see how deeply the language impresses my audience. The early childhood educators asked me to read some of the story in Yiddish, even though most of them understood a few words at most.

At the formal plenary, I spoke about one of my favorite figures in Yiddish literature, who was himself an educator even though his most famous works weren’t written precisely for children. Eliezer Shteynbarg (1880-1932) wrote 150 rhyming fables whose protagonists are animals and household objects, talking among themselves. Although these fables sound folkloric and accessible, they are at the same time sophisticated formulations of a worldview in which both the forces of light and darkness figure prominently.

According to my interpretation, the overarching theme of Shteynbarg’s work is the power struggle between individuals, as expressed through conversation and dialogue. Meshing my reading with the conference’s theme, my talk was called “The Messiness of Speaking With Others.” I had lectured about Shteynbarg’s poetry many times before, but this was a bit of a revelation to me for two reasons.

One was that when I asked the audience to read over the text with a study partner (as I usually do), they then had the opportunity to use art supplies to create pictures and small sculptures inspired by the characters in the fables (a slaughtering knife, a saw, two roses, etc.). Moreover, this was my first time teaching with graphic facilitation. As I spoke to the audience, a very talented artist, Marsha Dunn, simultaneously illustrated my main ideas so that visual learners would be able to take them in immediately. The result? Dunn produced a large foam-core board, the size of a small car, with beautiful images and phrases that reflected my words and Shteynbarg’s textual imagery.

After dinner, I read, together with a smaller group, two children’s stories that valorized Sabbath observance—even though their authors were socialists! We discussed the use of folk materials (such as the Mayseh bukh/Ma’aseh Book/ Book of Yiddish Folktales of 1602) and Hasidic wonder tales. We speculated about the value of the Sabbath for passionate socialists, as a unique period of time that belonged to the worker and his or her family alone, and not to the boss.

After that I drank a mojito (the teachers know how to cut loose!), marveled at the sight of pomegranate seeds on the light table against the thick Pennsylvania darkness, and finally made my way to one of the wooden cabins to turn in, so that I’d be ready for another day of messing around.

Yiddish Fables As Part of a Kindergarten Curriculum 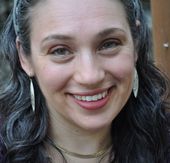 Yiddish Fables As Part of a Kindergarten Curriculum