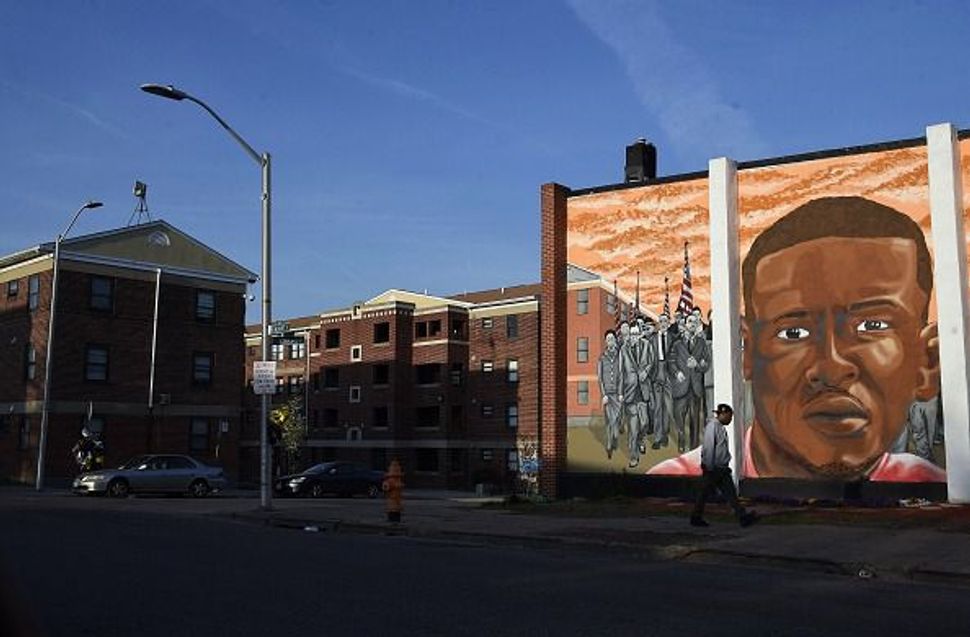 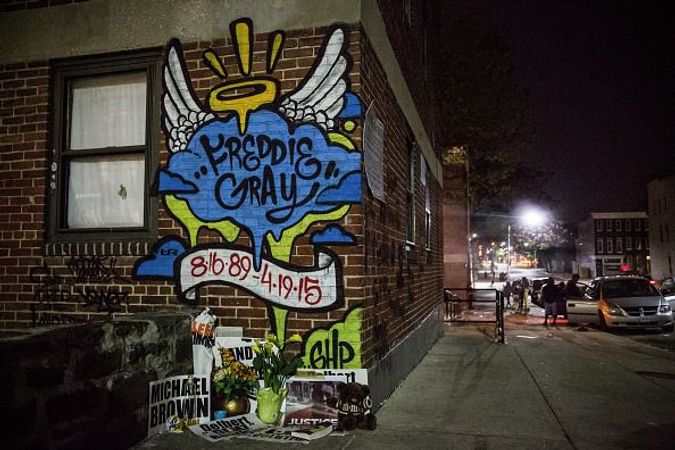 More than one year after Freddie Gray died in police custody here in Baltimore, within walking distance of my home, I still remember the palpable anxiety and anticipation of those days in April 2015. Protests, mostly peaceful, were a daily feature and curfew a nightly one. The national guard was deployed; I took a photo of them standing guard in front of The Cheesecake Factory while we marched to City Hall. There was a surreality about it all. The city was reeling from looting and rioting which had laid bare the frustration so many people of color were feeling around the country. Baltimore is a largely black city, and police brutality is nothing new here. But now our town had become synonymous with Ferguson, Gray’s name taking pole position in the race to hold American society accountable for the latest iteration of our original sin. Justice for Trayvon became justice for Mike, Tamir, Eric, now Freddie. 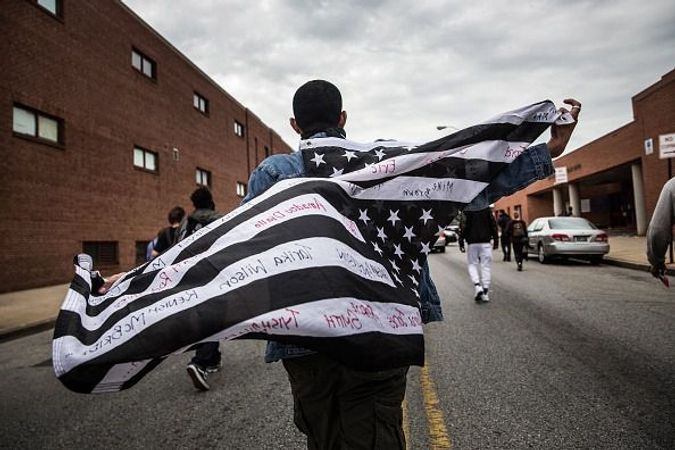 Protesters march through the streets in support of Maryland state attorney Marilyn Mosby’s announcement that charges would be filed against Baltimore police officers in the death of Freddie Gray on May 1, 2015 in Baltimore, Maryland. Image by Andrew Burton / Getty Images

Into the breach stepped Marilyn Mosby, a beautiful and ambitious young States Attorney who catapulted to brief international fame by doing what other prosecutors seemed unable or unwilling to do – bring serious charges against six officers who were involved in transporting this 25-year-old, lead-poisoned product of public housing in a police van on April 12. And many people cheered. A reasonably healthy young man shouldn’t go shackled into a van and come out with his neck broken. “The whole damned system is to blame,” was the feeling on the street, so why not just throw the book at the lot of them? 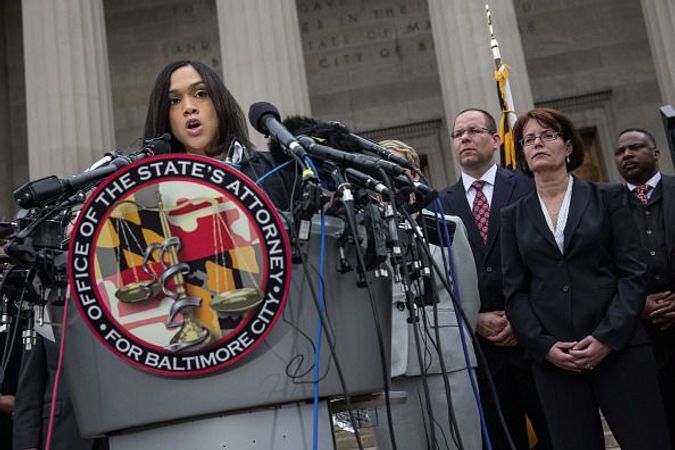 I know Ms. Mosby. She’s a neighbor of mine. She and her husband Nick Mosby, the Gray family’s and my own city councilman, have been to our home for Shabbat dinner. Her daughter and mine were in a neighborhood Brownie troop together. This week many are questioning her decision to bring charges so quickly, and a Baltimore Sun expose notes there may have been pressure from prosecutors to present a skewed narrative to the grand jury in order to fast track indictments. But back then there was a palpable sense that to stop the bleeding something bold, if a bit brash, should be done. So audacious charges were filed, police officers accused, not just of bad form or incompetence, but crimes, even murder. States Attorney Mosby wanted a win. Baltimore needed a win. Black lives needed to matter, not just trend on social media. Little thought was given on the street or in the social justice community to whether this win would be a pyrrhic victory. And those of us who assumed it would, mostly kept our mouths shut. 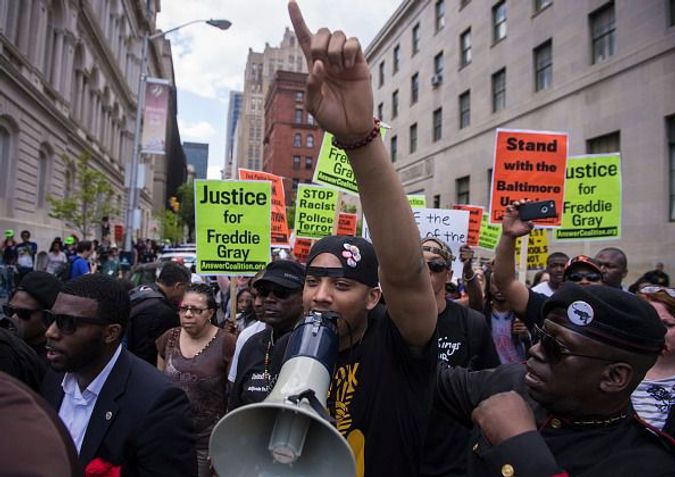 Protestors march to City Hall in solidarity with Freddie Gray after it was announced that criminal charges would be brought against all 6 officers involved in the Freddie Gray case. Image by The Washington Post

This past week Officer Caesar Goodson was acquitted of all charges, the second such acquittal by Judge Barry Williams. Ben Jealous, former head of the NAACP, tweeted “Maybe we should put the police van on trial for the death of #FreddieGray?” But, I wonder if maybe Williams’ decision was not only the right one as a matter of law but also the best finding for Baltimore and the #BlackLivesMatter movement?

In a manner of speaking, we do need to put the van on trial, because scapegoating rarely works in the long run. It distracts attention and deflects blame. The desire to have one officer take the fall belies the great and urgent need to hold society accountable. Is Goodson innocent? Of course not. I’d like to think any decent human being, having another human being, much less a shackled one, in his care, would have bothered to seat-belt him. Driving is dangerous, even without rough rides. And that’s assuming Freddie Gray should have been in that van in the first place. But having a fall guy, whether Goodson or one of the other officers, while placating some, won’t change a thing.

Much of the mood in Baltimore and on national television last week was one of relief. The city didn’t explode the way it did (or people thought it did) last year, the way LA did after Rodney King. But, I for one hope this is a watershed moment for American society. The questions I’m asking myself, the questions our congregation in Central-West Baltimore is asking, are these: Will we be able to keep the wound exposed long enough to begin some real healing? Will terms like white privilege, institutional racism, mass incarceration and police accountability become relics of this era, curiosities of history like the Equal Rights Amendment, comprehensive immigration reform or meaningful gun control? Or will this be the moment when America finally confronts the legacy of structural racism and slavery, its antecedent? There is no justice for Freddie Gray unless we put America and Americans on trial, more of us asking tough questions of ourselves and others and demanding changes in policy, discourse and law.

Caesar Goodson is free to go. Edward Nero is free to go. The other four officers are likely to follow suit. But blackness in America is still a liability. As Abraham Joshua Heschel once said, “…in a free society, some are guilty, but all are responsible.”