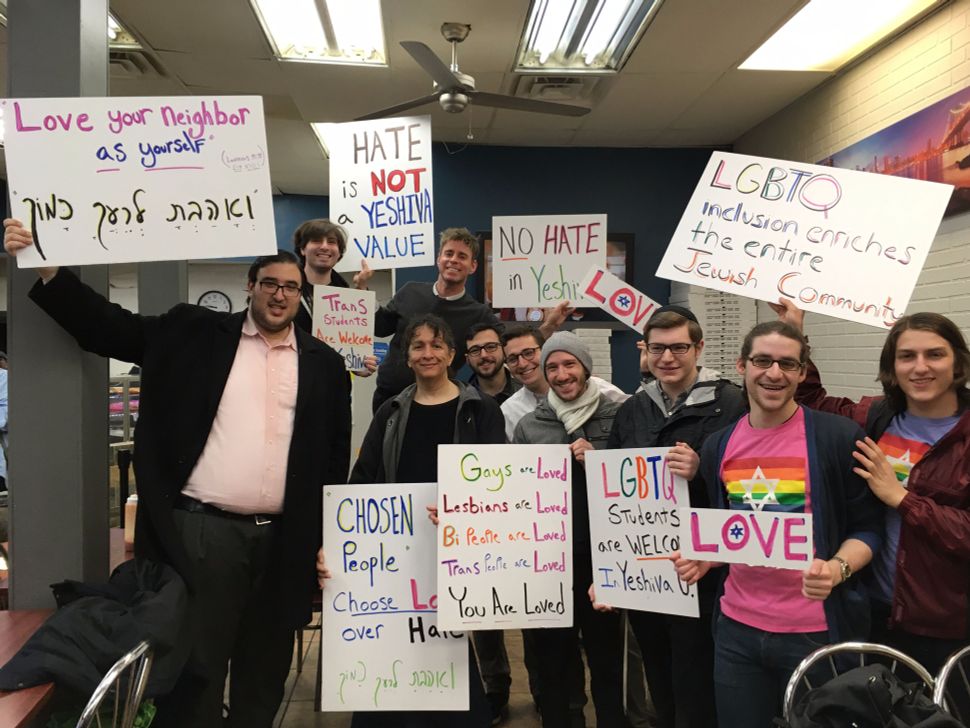 After the announcement, a group of Yeshiva University students, alumni and friends organized a counter-protest on Facebook. The event description said, “Bring your gay, lesbian, trans, and all of the above loving Jew selves over to say a hearty howdy do to our visitors from the great state of Kansas.”

“I heard that the Westboro Baptist Church was coming to Yeshiva University,” said Asher Lovy, one of the organizers of the counter-protest. “I just figured, if someone is going to be standing outside a Jewish institution giving a message of hate, it should be countered with a message of love.”

In a statement posted on Facebook, Yeshiva University condemned the “targeting of Jews and any human being based on religion, political affiliation or sexual orientation,” but also invited the students not to engage in the counter-protest to deny the Church the “media spectacle” they were seeking.

While many thought it was important to show support to the local LGBTQ community, others disagreed. Doron Levine, editor-in-chief of the Commentator, one of the school’s newspapers, wrote an article entitled “Don’t Protest the Westboro Baptist Church.” Levine said that the community should ignore the Church, and he also added that the way the protest was advertised excluded a large portion of students who did not agree with the pro-gay nature of the counter-protest.

Though 230 people said on Facebook they were “interested” in the event and 68 people confirmed they were coming, probably due to the rain, only around 25 came to the counter-protest.

About one hour before the six Westboro Baptist Church representatives arrived, counter-protesters meet at Lake Como Pizza, a kosher pizzeria by Yeshiva University, where they met with Zac Mordechai Levovitz, executive director of Jewish Queer Youth. JQY, which has been very active with helping Jewish LGBTQ youth at risk through its Drop-in Center, offered coffee to the participants. Levovitz stressed the importance that the counter-protest had in sending a message to the LGBTQ students of the university. Participants held signs with messages such as “Hate is not a Yeshiva value” and “LGBTQ inclusion enriches the entire community.”

On the other side of the street, the five ladies from the Church did not hold any signs related to gays being “doomed,” as they have done in previous demonstrations. Instead, all of their signs attacked the Jews, claiming they had “killed Jesus.” The Church members also sang, “wrath will soon pour on you, for your harmful sins, your great affliction, it will soon begin,” adapting the lyrics to the tune of the Israeli national anthem.

“The more open and proud we are as a community, the more good we can do as a community,” said Brandon Berrett, a Yeshiva University student. “I think that this kind of statement resonates in the YU community, even if it doesn’t in the Westboro Baptist Church.”

Simone Somekh is a freelance journalist currently pursuing an M.A. degree in Journalism and European & Mediterranean Studies at New York University. Follow him on Twitter @simonsays101.