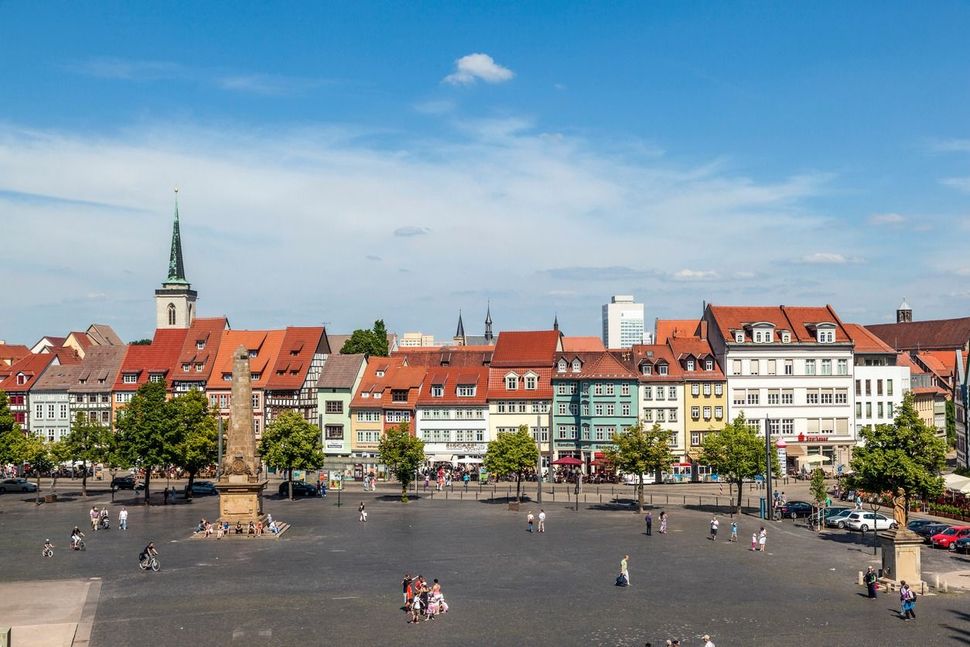 Erfurt is a small city in central Germany packed with medieval buildings. Due to its position along the ancient Via Regia trade route, Erfurt has strong Jewish associations as well — most famously the Efurt Old Synagogue, a beautifully restored medieval temple, parts of which date from the 11th century. In order to better understand the role of Jews in Erfurt — both then and now — we spoke to Dr. Ansel Hartinger, Director of the History Museums of Erfurt. 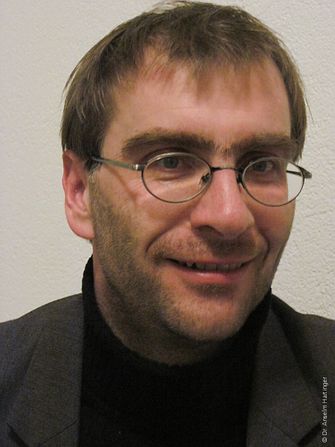 Please tell us your background. Are you a historian by profession?

I trained as a historian and also a musicologist. I studied in Leipzig and Basel and a few other places. I didn’t study Jewish history, but I did deal with Mendelssohn and questions of Jewish culture and assimilation.

What do you do as a museum director?

I’m responsible for development, research and maintaining contacts with media and corporate partners. I’m responsible for making sure there is good scholarship and curators and technical staff. There is a lot to do because it is not a state museum, it’s from the town; it’s run by mixed public money. The money comes partly from the state of Thuringia and the town. We are not quite overfunded.

The Centerpiece of the Old Synagogue Museum is the Erfurt Treasure, which was likely buried by a Jewish merchant during the 1349 pogrom. What were archeologists looking for in 1998 when they discovered the treasure?

Because Erfurt is a very old town with a complex history, everything somebody does there has to be supervised by archaeologists. On the next corner of the next street [from the Old Synagogue] workers were doing refurbishments. They were working on the wall of a cellar and they found the treasure by chance. We know in 1349 there was a pogrom in Erfurt, and we know from documentary evidence Jewish residents tried to hide their treasures. Some have been found and turned over to the state and some have been stolen. This was hidden so well nobody could find. It’s a once in a lifetime finding. Normally all archeological findings go to state but they made the great decision to show it in Erfurt. It was a wise decision because we are on the next corner the next street.

Do we know anything about the merchant, Kalman von Wiehe?

He was a merchant, a long-distance merchant. Wiehe is the name of a town about thirty to forty kilometers from Erfurt. We have no absolute proof, no smoking gun as you say, that it was his house, but it is a strong assumption. The street where the treasure was found was a street where a lot of Jewish people lived. There was no ghetto in Erfurt; the Jews were not directly separated. Michaelisstrasse was in a mixed neighborhood with strong Jewish population. We knew clearly that it was a Jewish treasure because of the wedding ring which is a very typical Jewish wedding ring of late medieval period. The ring has mazel tov on it and a kind of tower like the Temple in Jerusalem.

Would people wear this kind of ring every day?

It was more a ceremonial gift at the moment of the marriage. Also it was an item for very wealthy people. It was a kind of insurance. Most of the time the woman dies before the man. So she has a precious piece if the husband dies. She can get money if he dies.

Tell us a little about the Via Regia, or the King’s Route, the trade route, and its relationship to Erfurt.

It was a very famous and important trade route from Frankfurt to Erfurt and Leipzig to Silesia and Poland and Russia. The route goes right over the Krämerbrücke, the Merchants’ Bridge in the center of town. Erfurt traded in many things but it specialized in making a dye, a wonderful blue color that comes from a flower called waid. Many got rich off the special plant. Erfurt was also a center of beer production.

How did the Old Synagogue become a museum?

First I need to give a little history of the synagogue itself. After the pogrom of 1349, a Christian merchant bought it and used it as a storage room. In the 19th century it was a pub and a dance hall. This was actually good because during the Fascist era, the Nazi era, nobody knew it was the old synagogue. Maybe some scholars knew, but they didn’t make it public. Because if it was known it would have been destroyed. After German reunification, we discovered real value of the place. After finding the treasure, we had this wonderful convergence, where we could put them together. The Old Synagogue is at the core of our complex, is our most famous and best frequented museums.

What’s your favorite item in the museum?

The remains of the Jewish structure on the ground floor. There are three stone fragments and from the quality of the stone we assume they were fragments from the bima. I really like the coins in the treasure. The coins from France have wonderful engravings, and they show that Erfurt was part of an international network.

Near the Old Synagogue, archaeologists found a medieval-era mikvah.

That was another lucky finding. Next month, in July, will be the tenth anniversary of re-finding of the mikvah. Like the Old Synagogue it was also the case that it was found during reconstruction. They thought it was an old cellar. An expert saw the quality of the stones and she checked maps and tax lists. We did a careful excavation, and now it’s an annex to the Erfurt Synagogue. The mikvah is dry now because in 19th century, they changed the banks of the river to avoid floods. As long as there is water the stone is protected, so we watch it carefully to make sure it stays intact.

What would you like Jewish travelers to know about the Old Synagogue?

The Erfurt Synagogue is one of the most visited sites in the state of Thuringia. Every year we get between forty and fifty thousand visitors. We have an audio guide in English, and if a Jewish group is interested we can give a tour in Hebrew. We try very hard for a modern experience for Jewish groups and all our visitors. We have close links with Jewish community of Erfurt. Together we prepare talks and lectures.

What would you like Americans in general to know about Erfurt?

Americans would be surprised to see such a wonderfully preserved medieval city center. It’s like a fairy tale with old houses, a cathedral, a fort. But Erfurt is not a museum. People live, work, dine, things like that. It’s a lively city with impressions of a medieval, historic town. Martin Luther was a student here, and there is the factory Topf and Sons. They manufactured the ovens used in Auschwitz, and that is now a museum too, and a place where we have talks and gatherings to discuss questions of responsibility. I tell people that Erfurt is a place where you can see Germany in all its glamour and all its problems. I don’t nobody anybody who says “I won’t come back.”