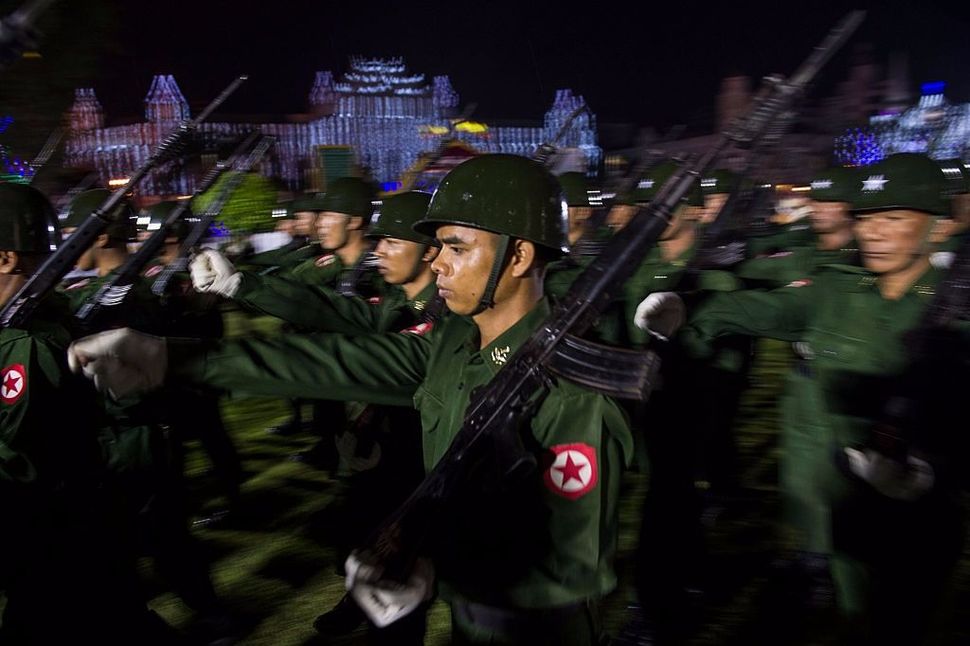 Last month I wrote a piece for the Forward detailing the history of Israel’s collaboration with the brutal, and now genocidal, military of Myanmar and the thus far unsuccessful efforts of Eitay Mack, an Israeli human rights lawyer, to stop it, and I wanted to briefly address Wyner’s claim.

Wyner bases his claim of exaggeration on information from the Stockholm International Peace Research Institute, from whose graphs on the arms trade he concludes that previous to 2012 Israel was responsible for 3.7% of the arms sales to Myanmar, and post 2012 none.

There are a number of problems with Wyner’s information and analysis. As Jill Jacobs and Avidan Freedman wrote in the Forward last week, the primary problem is that it “fails to acknowledge Israel’s exceptional secrecy when it comes to its weapons exports and the resulting dearth of publicly-available information.”

In fact, as I outlined in my article, there is evidence that TAR Ideal Concepts, an Israeli company, as provided recent arms and training to Israel, taken from their own website. It was removed after Eitay Mack brought it to public attention as part of his petition to stop Israeli collaboration with Myanmar, which went before the Israeli High Court on Sep 25.

Contrary to Wyner’s suggestion that such arms sales are the actions of “private companies” and not the state, all military sales in Israel must be explicitly approved by the State and are considered, by the government, to be matters of foreign policy. In fact that is the very argument the Israeli government made to shield such arms deals from public scrutiny- that they are not subject to civil legal oversight but are a matter of defense policy.

Far from being inconsequential in the eyes of the Israeli government, the nature of the Israel-Myanmar relationship was considered so sensitive a matter that the state ordered the hearing on Mack’s petition to be classified and barred all public discussion of it.

Lastly, Wyner’s assertion that Israeli arms before 2012 accounted for a “mere 3.7%” of those sold to Myanmar is hardly comforting. Can you imagine someone defending a country for providing 3.7% of weapons and training sold to the Nazi government during WW2? Should we be reassured that Israel is only responsible for 3.7% of Myanmar’s atrocities? Would we feel better if we only held Israel accountable for 3.7% of the 500,000 refugees (around 18,500 people) or 4% of the murders (perhaps two or three dozen of the dead) or 4% of the rapes (how many hundreds) or 4% of the infanticides (even one would be too much).

Cold comfort indeed. No, the criticism of Israel is not exaggerated, and Israeli cooperation with the military of Myanmar must stop.