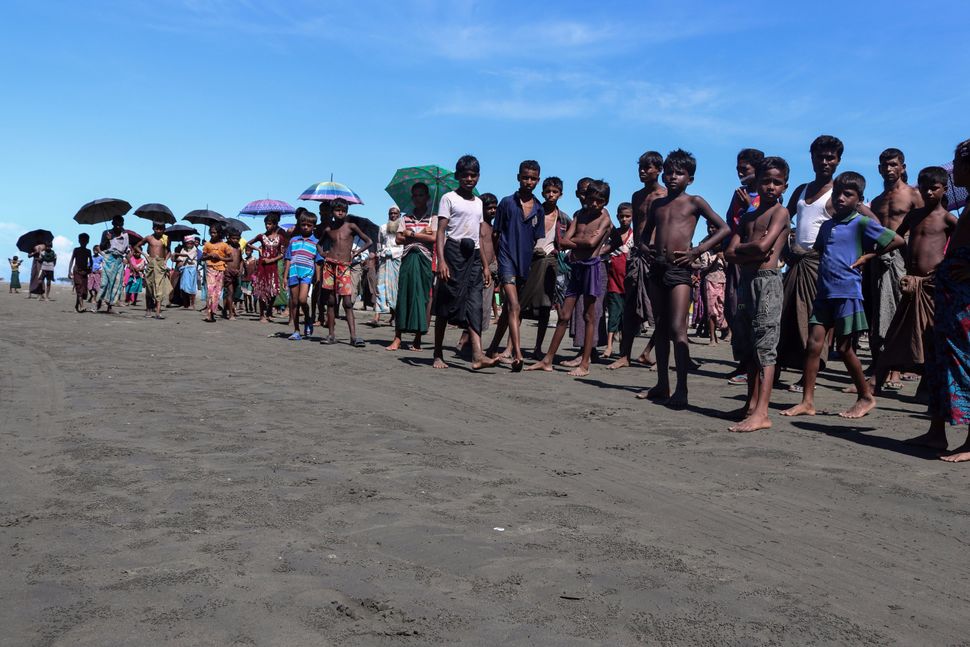 Three weeks ago, an organization called JACOB — the Jewish Alliance of Concern Over Burma — co-sponsored a rally in front of the United Nations. The reason: The government of Myanmar (Burma’s current name) is slaughtering its Muslim minority, the Rohingya, on a vast scale. As many as 400,000 Rohingya have fled their homes. Forty percent of Rohingya villages are now depopulated. According to the Office of the United Nations High Commissioner for Human Rights, “The situation seems a textbook example of ethnic cleansing.”

JACOB went further. It called Myanmar’s actions “genocidal” And it invoked that sacred Jewish phrase: “Never Again.” JACOB’s coordinator, Rabbi Simcha Weintraub, vowed that “By every means possible, we must and will stop the genocide killing machines of Myanmar.”

Well, not by every means possible. The United States and European Union have both banned weapons sales to Myanmar. Only one Western country still arms the regime carrying out this mass slaughter: Israel. Prime Minister Benjamin Netanyahu’s government has even gone to court to ensure its right to continue doing so. Yet America’s most prominent Jewish organizations, despite comparing Myanmar’s crimes to the Holocaust, won’t publicly pressure Israel to stop.

To his credit, Weintraub himself signed a rabbis’ letter issued by Truah: The Rabbinic Call for Human Rights “urging the Israeli government to stop weapons sales to Burma (Myanmar) and military training services there.” But the most powerful organizations in his alliance have been painfully silent.

The Conference of Presidents of Major American Jewish Organizations is a member of JACOB. But as far as I can tell from perusing its website, it has said nothing about Israeli arms sales. (A phone message to the Presidents Conference’s press office went unanswered.)

Two other members of JACOB, the American Jewish Committee’s Blaustein Center for Human Rights and the Jewish Council for Public Affairs, did sign a Human Rights Watch letter asking “all states to immediately suspend military assistance and cooperation with Myanmar.” But despite their usual focus on the Jewish state, neither organization has said anything about Israel in particular.

The Anti-Defamation League in early October sent a letter to Secretary of State Rex Tillerson urging the U.S. to take “financial and other punitive measures against the Burmese security forces responsible for the violence.” That’s great. But the United States isn’t selling Myanmar weapons; Israel is. Its leaders have yet to receive an open letter from the ADL.

It’s a perfect illustration of the organized American Jewish community’s moral schizophrenia. When it comes to every country except the Jewish state, mainstream Jewish groups emphasize human rights. They do so because they genuinely believe that Jews have a special obligation to aid groups like the Rohingya, who suffer persecution and even genocide. They remember the Torah’s reminder that Jews, as a people born in slavery, “know the heart of the stranger.”

When it comes to Israel, however, these same organizations abandon human rights in favor of whataboutism. They argue that the real moral problem is not Israeli abuses but disproportionate criticism it attracts.

On Myanmar, these two impulses collide. American Jewish groups thunder about the ethnic cleansing there — until doing so might require criticizing Israel. Then the thunder stops. They demand that the world remember the injunction: Never Again. But they won’t remind the government whose citizens stand in silence for two minutes on Yom Hashoah.

Last month, Ronald Lauder, president of the World Jewish Congress, after condemning the “ethnic cleansing, and genocide, signs of which are already strongly taking shape in Myanmar,” insisted, “The Jewish people, who are far too often targeted with violence and bigotry, must not remain silent in the face of such extremism.” The Jewish people must not remain silent, that is, unless the ethnic cleansing and genocide are being abetted by the Jewish state. There’s nothing on the World Jewish Congress’s website about Israeli arms sales either.

In his speech last month to the United Nations, Netanyahu said Israel was fulfilling the Prophet Isaiah’s promise to make the Jewish people “a light unto the nations, bringing salvation to the ends of the earth.” There are places where Israel is indeed doing that. But in Myanmar, it is bringing not salvation but destruction. And the organized American Jewish community, through its silence, is complicit.

If you say you care about the agony of the Rohingya, just not enough to risk a public confrontation with the Israeli government, then perhaps you don’t really care that much at all.

Peter Beinart is a Forward contributing editor and senior columnist.