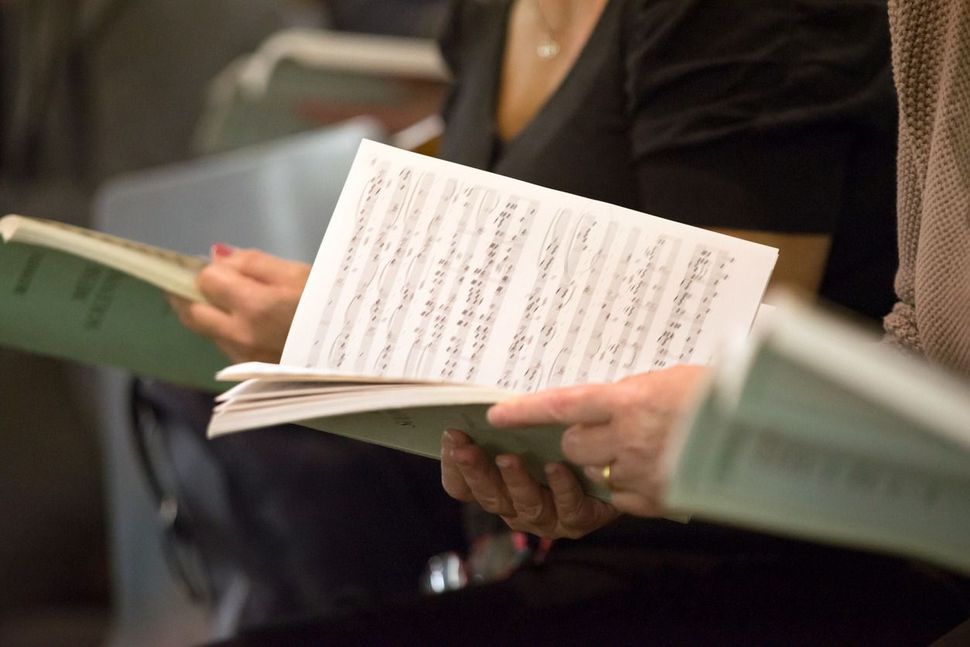 I’ve been a musician since my first recorder lessons 50 years ago. My vision was to be the first woman conducting a major symphony, but Sarah Caldwell snagged that spot at precisely the moment I was graduating from high school.

So much of the music I performed had its roots in Christian liturgy. Most of the great composers were writing for church patrons, church settings, and church occasions. This never concerned me much. The music was undeniably beautiful; I loved playing it, and as an instrumentalist, I was never called upon to perform liturgical text.

I was waylaid from most of my music activities by a career in theatre, TV news and teaching, peppered with graduate school and family life. I did whip out the flute on occasion to play with family or to compose a theme for a theatre production, but that was the extent of my musical activities.

Four years ago, my family moved to the charming Virginia countryside just west of DC. My husband and I were looking for work, and my mother-in-law would often encourage me to play with her for fun and for community events, and when word got out, her little Episcopal church snagged me now and again to play for their services.

I would recall how my rabbi said, encouraging us to try on practices, to be careful not to take on a practice that visibly identifies us as Jewish without being conscious of how we walk in the world. In other words, if you wear a yarmulke, you can’t eat a bacon cheeseburger in front of others.

I developed a sense of boundaries at the church — I would play along with any music presented, but I wouldn’t participate in anything that looked like prayer, and I avoided the words, “Christ” and “Jesus” if I was singing along.

I developed a friendship developed with the rector, Reverend Anne Hallmark, and I began to work with her on bringing some Hebrew into her study. She, in turn, offered to send me to a meditation retreat. I found myself joining Kohenet Hebrew Priestess Institute in their seventh class.

Almost two years ago, my mother-in-law began recruiting me (and my son and husband) to join the Loudoun Chorale — a 100-voice community choir made up entirely of church singers and led by a young maverick conductor, Max Nolin. We sing music mostly with Christian themes, Christian liturgical text, and general spiritual content. Although I’m not a brilliant singer, as a musician, I love participating in a large ensemble. And I’m not singing in the choir to proselytize; I am just making beautiful music.

Last fall, my beloved stepfather, who raised me from age 2, was diagnosed with Stage IV bile duct cancer. In eight weeks, he was gone. The shock was unbelievable. I was lost. I wept through the next Kohenet training retreat and found solace in the company of my priestess community and the beautiful music we sang in worship and study — melodies mostly written by two of the three leaders of Kohenet, Taya Shere and Shoshana Jedwab.

Upon returning home, I began to prepare to write Dad’s eulogy, struggled to say Kaddish in the Virginia countryside, and mourned.

At my next Chorale rehearsal, mid-rehearsal break, I had a sudden inspiration. I approached Max and asked, “If I were to arrange a piece using Hebrew liturgical text, would you be interested?” He didn’t hesitate for a second, and said we would include it in our December concert. I was in a bit of shock at first. I’ve never written a piece for choru, but I began to work and the work was a great comfort.

I asked permission of Shoshana and Taya to use their pieces. I also asked Zach Fredman, my old New Shul rabbi and leader of the Epichorus, if I could use one of his melodies. The piece began to take shape as a pastiche of songs I like. I gathered favorite melodies — twenty of them — from the Kohenet Siddur, prayer book. And then I realized that this was becoming a choral requiem for Dad.

The choral requiem is titled Shirei haKohanot (Priestess Songs), ten pieces beginning with the “Shema,” done in the manner of Kohenet worship, followed by “Rumi Nishmat,” “Shalom Aleichem,” “Ashrei,” “Where You Go,” “Tehom,” my own interpretation of the Mourner’s Kaddish, “I Remember,” “Sun Hallelujah,” and ending with “Ufros.” It traces my own struggle with mourning Dad, celebrating his life, and embracing Tikkun Olam, repair of the world, as he did.

The rehearsal process has been rewarding, emotional, scary, and overwhelming in turn. The Chorale has embraced my project, learning the Hebrew where needed, asking great questions, diving into the process, and making amazing sounds. I’m no longer a random tenor in the crowd — everyone feels they have a stake in my journey. They have treated my music and the music of Taya, Zach and Shoshana, with the same respect they offer the Rachmaninoff, Berlioz, and Charpentier pieces we’re working on.

The world premiere of Shirei haKohanot will be Saturday, December 9th at 7:00 pm and Sunday, December 10th at 4:00. Tickets are on sale on the Loudon Chorale’s website.

Laurie Wessely resides in Loudoun County, Virginia, with her family. She is an adjunct professor at Northern Virginia Community College, an occasional caterer, a member of the Loudoun Chorale, and a student in the Zayin cohort of The Hebrew Priestess Institute (Kohenet).