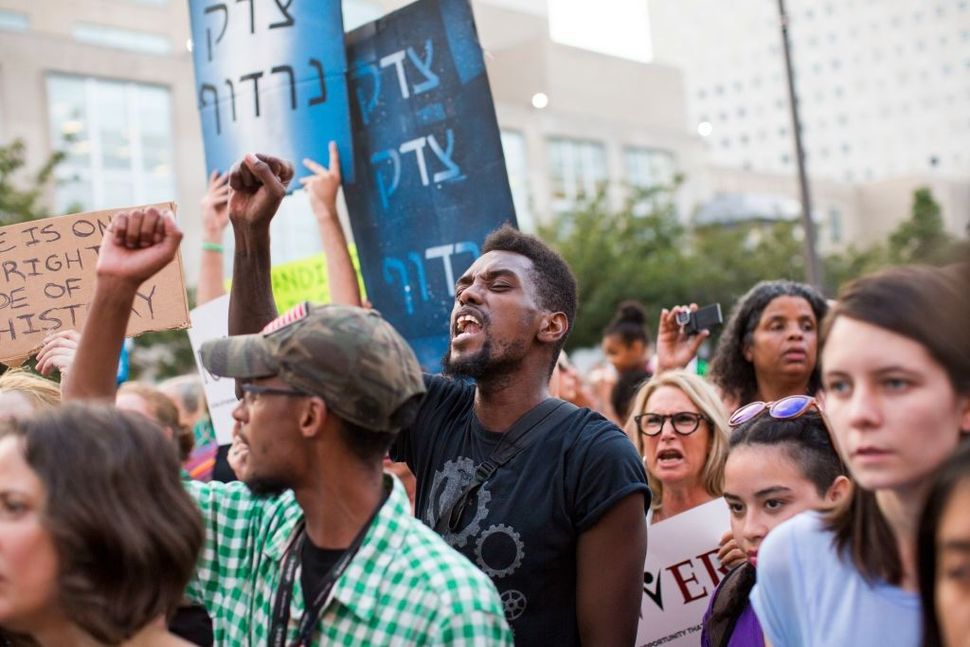 Demonstrators participate in a march and rally against white supremacy on August 16, 2017 in Philadelphia, Pennsylvania. (Photo by Jessica Kourkounis/Getty Images) Image by Getty Images

On July 5, James Alex Fields, Jr. pleaded not guilty to a 30-count federal indictment charging him with perpetrating the Charlottesville massacre. The first 17 counts charge Mr. Fields under section 1 of the federal hate crimes law, the Matthew Shepard and James Boyd, Jr. Hate Crimes Prevention Act of 2009. The law punishes persons who use a dangerous weapon to harm or attempt to harm individuals because of animus toward their actual or perceived race, color, religion or national origin.

Normally, when legislating about private citizens, Congress invokes its powers under Article I of the Constitution, such as the commerce power (the Brady Handgun Violence Protection Act of 1993) or the taxing power (the Affordable Care Act). Unlike section 2 of the Hate Crimes Prevention Act, which punishes crimes based on sexual orientation, gender identity or disability, section 1 does not require an effect on interstate commerce or a venue on federal property.

Right-wing think tanks, such as the Heritage Foundation and the Cato Institute, have argued that, in these circumstances, the law unconstitutionally overrides state power. Some lower court have held that the increased penalties for hate crimes violate the First Amendment by punishing a person’s beliefs.

The Justice Department explained that Congress enacted section 1 of the hate crime law under the Thirteenth Amendment, which abolished slavery. In his famous dissent in Plessy v. Ferguson (1896), Justice John Marshall Harlan declared that “[The Thirteenth Amendment] not only struck down the institution of slavery… but it prevents the imposition of any burdens or disabilities that constitute slavery… It decreed universal civil freedom in this country.” His interpretation then prevailed in Jones v. Alfred H. Mayer Co. (1968). The Thirteenth Amendment gives Congress full authority to fulfill the vision of universal civil freedom — a vision that hate crimes threaten.

As far as First Amendment challenges go, the United States Supreme Court rejected them in Wisconsin v. Mitchell (1993), a case about an African American who severely beat a young white man out of racial hatred. Chief Justice William Rehnquist wrote, “A defendant’s abstract beliefs, however obnoxious to most people, may not be taken into consideration by a sentencing judge.” In contrast, the Wisconsin law punished conduct. Bad motive for a crime has traditionally led to a longer sentence. The Court noted that violence against protected minorities ”is thought to inflict greater individual and societal harm.”

In the Charlottesville case, prosecutors claimed that, at an alt-right rally, Fields chanted racist and anti-Semitic slogans. When police broke up the gathering, he drove away, and, when he saw a racially and ethnically diverse crowd of counter-protesters, he put his vehicle in reverse gear and plowed into the group. He killed one woman and injured dozens.

New Jersey, like New York and other states, authorizes increased penalties for crimes motivated by bigotry. Last summer, a judge in the Superior Court of New Jersey sentenced two young men, Aakash Dalal, 24, and Anthony Graziano, 19, to 35 years in prison for a series of arson attacks against synagogues and the firebombing of the occupied home of a rabbi and his family. The defendants had also sprayed anti-Semitic graffiti on several synagogues.

The court convicted the two on one count of terrorism and 16 and 19 counts, respectively, of arson and related crimes. Had anti-Semitism not played a role in the defendants’ rampage, their crimes would have constituted second-degree arson. Because Dalal and Graziano deliberately targeted Jews, however, New Jersey’s anti-terrorism law kicked in.

Passed in the wake of the destruction of the World Trade Center, New Jersey’s September 11th, 2001 Anti-Terrorism Act outlawed “conspiracy to commit [arson or aggravated arson] where the structure which was the target of the crime was a church, synagogue, temple or other place of public worship.” The law raised penalties to 10-20 years in prison for each offense. Formerly, these crimes had carried a maximum of 10 years for each offense. At Dalal and Graziano’s sentencing, the family in the firebombed home and other members of the Jewish community in Northern New Jersey spoke of the extraordinary trauma the attacks triggered.

The government cannot stop fringe characters from advocating that this country belongs to whites and Christians. But the law can curb violent extremists.