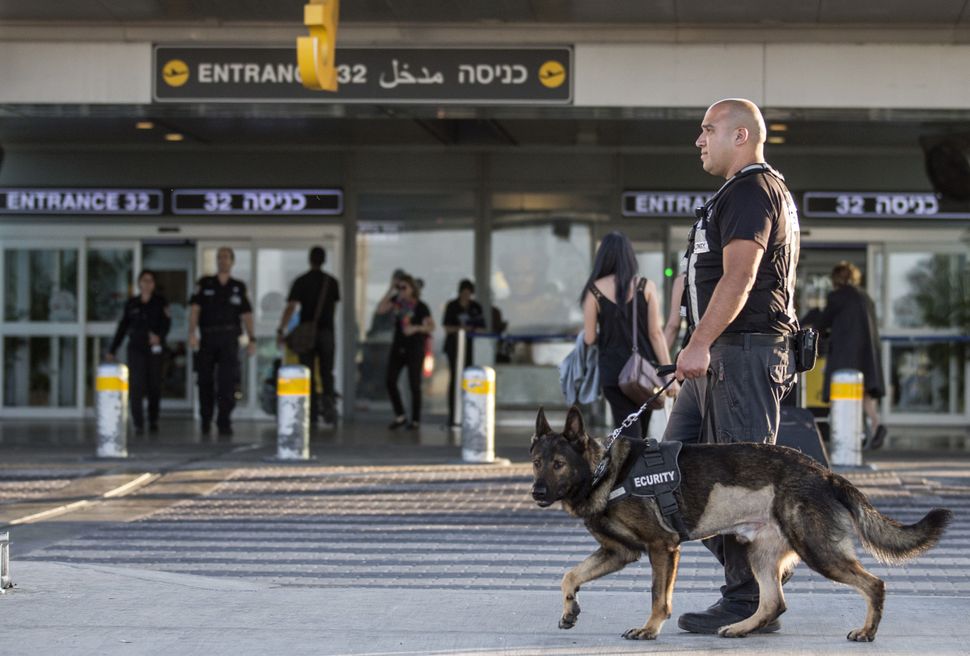 A security officer leads a dog as they patrol the entrance of Ben Gurion International airport, near the Mediterranean Israeli coastal city of Tel Aviv on August 21, 2014, following a warning issued by Hamas’s armed wing that they will target the airport from 6 am (0300 GMT) in a bid to disrupt air traffic. Image by Getty Images

A British Palestinian professor deported. A Swedish Jewish journalist questioned for hours. An East Jerusalem Palestinian professor hassled on her way to Tunis. A woman strip searched for being born in the Middle East. A French intern at an Israeli newspaper held for hours on her way back from Turkey. An Israeli Supreme Court justice’s daughter treated rudely and accused of having fake documents. A former US Secretary of Health and Human Services stopped because she had an Arab last name.

What do they have in common? They all ran afoul of Israel’s border security, usually while traveling through Ben-Gurion International Airport. People are pulled aside for up to three hours of questioning so frequently that it rarely gets much attention. However, recent detentions of several American Jewish activists have turned a spotlight on the interrogations. But the spotlight has a blind spot. It has focused on the experience of a few Americans while ignoring the treatment of other, more vulnerable, communities such as Palestinians, foreign workers, students, locals and particularly young women traveling alone. Even when those detained, as Peter Beinart recently was, acknowledge their privilege, they still make the story about themselves rather than the plethora of others, mostly non-Jews, who have had the same experience over the last decades.

On August 5, two American Jewish activists were stopped for questioning for several hours crossing from Sinai into Israel. Tamar Zandberg, Chairwoman of Meretz condemned the questioning. The New Israel Fund CEO claimed that Israel Prime Minister Benjamin Netanyahu had “turned its border crossings into interrogation chambers.” According to Simone Zimmerman, one of those detained, “we had teams of people making calls and advocating for us.” The story quickly became a cause celebre in Liberal Zionist and Jewish American circles, with tweets and articles.

As I watched the Twitter storm unfold, I remembered being stopped on the way back from Sinai in 2007. A South African friend and I had been to St. Catherine’s monastery. We were questioned and made to wait for a bit over an hour, maybe. I also remembered back to the first time I came to Israel in 2004 and was taken aside from the rest of the students travelling for my summer program. I didn’t fit some profile and my luggage got an extra rummaging.

Since then, I’ve watched as friends, co-workers and colleagues have been hassled by security. Turkish students at Hebrew University reported long hours of questioning. A French female journalist was always strip searched and asked rounds of questions. Arab friends from East Jerusalem joked that the pat downs and hours of questions were the “massage treatment” at the airport. And the hassling, harassment and allegations of widespread discrimination don’t stop at the airport or the border crossings. Recently a journalist with the Associated Press was barred from an event in Jerusalem, asked repeatedly about his “ethnic origin” and religion because he is from predominantly Muslim Kosovo in Europe.

In Israel, the discrimination against Arabs travelling through Ben-Gurion International Airport has been well known for decades. It rarely received enough attention in wider society, because it was excused for “security” reasons. Security is one of the few consensus issues in Israel. But the harassment of Arabs travelling extended beyond the stereotype of Israeli security doing some kind of smart profiling. Those I interviewed over the years included many young women, often secular Arab women, pulled aside and strip searched, their bags rifled through for hours. This included the daughter of Israeli Supreme Court Salim Jubran, who was actually a cadet at Israel’s foreign ministry when she was stopped.

I interviewed an intern who was often subjected to strip searches, a particularly humiliating part of the process. What was the point of a strip search in the Startup Nation, when better technologies than human pat-downs and hands can determine what someone is carrying? Every once in a while, Israeli courts have had to address the discrimination and treatment. In 2015, the Tel Aviv Magistrate’s Court found on behalf of Nader Shalhoub-Kevorkian, a professor at the Hebrew University of Jerusalem. “I felt naked in front of the inspectors,” she told Haaretz.

The targeting of people for political views has also gone on for years. Professor Norman Finkelstein was deported in 2008, and a British-Palestinian professor was barred in 2017, allegedly for tweets he wrote and other activities. Noam Chomsky and many others have been turned around at the borders and sent back. People are routinely kept for hours of questioning if they have visited enemy states such as Iran. Some of these security procedures may be necessary, but others are clearly invasive and involve harassment of targeted groups with no clear security benefit.

So why the sudden outrage? Is three hours in the life of an American worth more than three hours for millions of others at security checkpoints? Because it happened to “one of us”? In its condemnation, J Street said Zimmerman “exemplifies the future of American Jewish leadership” and that Israel was “shamefully signaling its contempt for the beliefs of progressive American Jews.” But the beliefs of progressive American Jews should extend to caring about the systematic discrimination even when it doesn’t impact them. For years, the practices of Israel’s border security went beyond security profiling and have involved a myriad of searches and detentions that were discriminatory and political. If you care about how Israel is treating activists at the border, you have to look at the system that enables it and ask about profiling and harassment of people who don’t have connections or a voice in media and aren’t community leaders. That’s what progressives have done in America when fighting systematic discrimination against African-Americans and other groups. Taking a page from that history would be a good start.