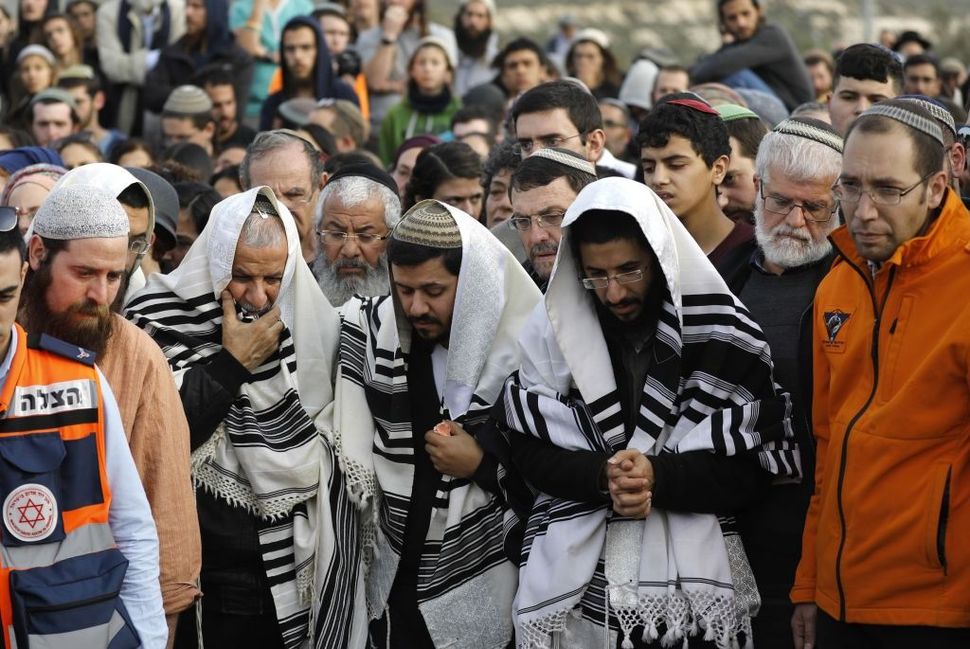 Israeli mourners attend the funeral of 35-year-old rabbi Raziel Shevah in the West Bank wildcat settlement of Havat Gilad near the northern West Bank city of Nablus on January 10, 2018. Image by Getty Images 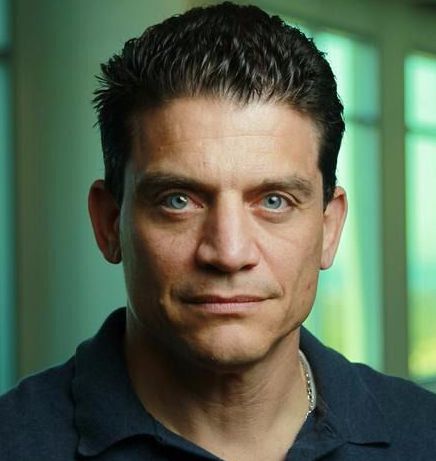 On Sunday September 16, 2018, Ari Fuld was murdered in a shopping mall.

Fuld, a 45-year-old loving husband, father of four, writer, teacher and former paratrooper, was stabbed to death by a 17-year-old terrorist. Fuld was an incredible man with a generous heart, as many have attested since his tragic murder.

Ari Fuld was also a hero. After being mortally wounded, he fought back. As the video of this heinous attack shows, Fuld, after being fatally stabbed in the back, fought his attacker. In the face of Ari’s counterpunch, the terrorist tried to flee — potentially, to try and stab another Jew. But the warrior in Ari, the Lion of Judah in him, ran after the terrorist. Steadying himself after sprinting at least 20 meters, and before he collapsed against the shopping mall wall from his fatal wound, Fuld shot and stopped the terrorist — who, unlike Ari, was successfully treated at an Israeli hospital for his wounds and will now likely receive cash rewards and a pension from the Palestinian Authority.

In much of the Israeli media, this was the story of the murder of Ari Fuld; the story of a brave and devoted son, brother, husband, father and teacher who was murdered in cold blood and taken away from his loving family way too soon.

But in much of the international media, this is the story that was told:

Settler. That is what the international media apparently thinks is most important in this terrible story, followed closely by the idea that Fuld was stabbed in the “occupied West Bank” or near an “illegal settlement.”

These descriptions and headlines not only dehumanize the victim by casting him as a faceless “settler,” but also seek to rationalize the murder itself; as if murdering in cold blood a Jew in Judea is somehow less despicable than murdering a Jew in Tel-Aviv, Herzliya, New York or Paris.

By this logic, if a Jew lives in Judea and Samaria, then, the Jewish murder victim is not a normal human being whose life is sacred and precious. No, settlers are to be demonized and dehumanized, even in death.

After all, if the murder victim was a “settler living on occupied land,” then perhaps he is to blame for what happened to him or had it coming. By the same token, his murderer is then not really a cold blooded killer in the same despicable category as a terrorist in London, New York or Paris. Instead, he is a “freedom fighter” or almost a victim himself, a person driven to murder by the “settler” having the temerity to live on land that apparently no Jew should be living on.

Of course, all of that is a lie, which ignores facts, history, international law and basic morality.

The “settlement” (or Jewish community in Judea) that Fuld lived in is the city of Efrat. It is part of what is called the “Gush Etzion Bloc” of Jewish communities in Judea, around 5 miles away from the most Jewish city in history, Jerusalem.

As a passionate and educated advocate for the Jewish people’s right to live in their indigenous, religious and historical homeland, Fuld taught and understood that if Arabs can peacefully live in Israel, in Tel-Aviv, in Haifa and in villages and towns throughout the Galilee, then Jews should certainly be able to live peacefully in Judea. Sadly, that is not the case. But not because Jews don’t have as much right to live in Judea as they do anywhere else on the planet (if not far more). Rather, because the same hate-filled and deeply intolerant Arab and Islamist Supremacist ideology that caused 5 Arab armies to seek to annihilate Israel in 1948 has also caused the leaders of the Palestinian Arabs to reject every partition plan and peace plan offered to them since 1937, and has repeatedly made Jews (and many others) the targets of Jihadist terrorists all over the world, including in Mumbai, Tel-Aviv, Brussels and Paris.

Fuld also taught and understood Jewish history. He knew that the enemies of Israel did not distinguish between Tel-Aviv and Efrat or between the Galilee and Judea. To Israel’s enemies, including those presently educating teenage boys to want to stab Jews whenever and wherever they can, all of Israel is “occupied territory.” Even the “moderate leader” of the Palestinian Authority, Mahmoud Abbas, has made it crystal clear that he holds this ahistorical position.

Ultimately, that is what makes the effort to dehumanize Fuld and to rationalize his murder by calling him a “settler” and the community in which he lived “occupied territory” so insidious.

If the “international media” and the international community wants peace between Israel and the Palestinians, the time is long overdue for them to stop ignoring the hate and intolerance that makes Jews living as a sovereign and free people anywhere in the land of Israel unacceptable for the vast of majority of Palestinians. It is time for them to stop excusing or rationalizing the murder of Jews simply because they have the chutzpah to live in Judea, our historic homeland. And it is certainly time to stop dehumanizing amazing fathers, husbands, friends and human beings like Ari Fuld.