Cosgrove: I skipped Sunday’s pro-Israel rally and got on a plane to Israel instead 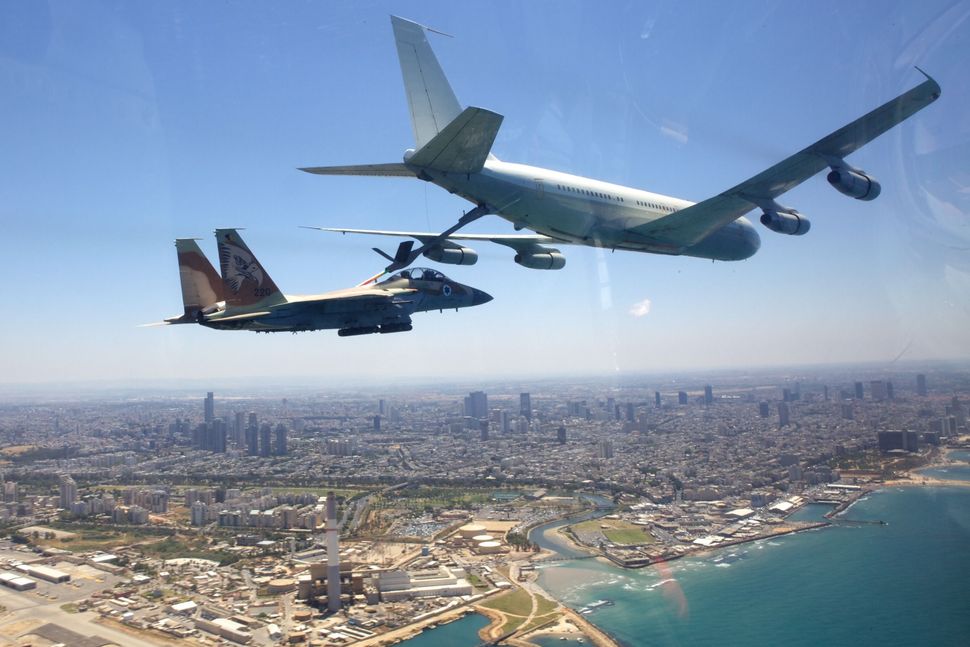 The Israeli Air Force crosses all of Israel from north to south, in honor of the country’s Independence Day, in 2011. Courtesy of Wikimedia Commons

When I received a call from a colleague asking me to attend, address, and mobilize my community for a pro-Israel rally on Sunday, I paused a beat before answering. I love Israel, and, as Woody Allen once said, most of life is just showing up. Israel needs friends, always, and especially now. So why did I pause?

As it turns out, I wasn’t the only one who received the call, and wasn’t the only one who hedged. One colleague, a bit to my political left, questioned whether the rally would be pro-Israel — or pro-peace? He did not feel that either he personally or his congregation could get behind an event that did not speak to the suffering of Palestinians and provide a platform for Palestinian voices.

Another colleague, a bit to the right of me, said basically the opposite: There were missiles raining down on Israel’s civilian population; a rally that equivocated on who was to blame, a rally at which Palestinian voices were given a platform, he said, was not one that he or his community would attend.

I found myself wondering if there was something deeper going on. What if these reasons were the symptoms, but the underlying reason was yet to be named? What if the real concern were fear that a rally might be organized in support of Israel and nobody would show up?

Maybe it would be better to stay home, and brush an awkward and inconvenient truth aside. Maybe our moment of indecision reflected a momentous inflection point that has been a long time in coming. An American Jewry that no longer goes to the mattresses for the Jewish state, a world in which, when the going gets tough for Israel, American Jewry no longer has Israel’s back.

Let’s hope the ceasefire between Israel and Hamas holds. But there is a battle raging on another front, one that this latest conflict has brought into relief: the battle for the soul of American Jewry.

The fault lines are there for all to see. Just before Shavuot, dozens of rabbinical students from a variety of seminaries signed a letter calling Israel — and by extension, American Jewry — to account for violent suppression of human rights. The letter made no mention of Hamas, terrorism, or — for the historically inclined — decades of Arab rejection of any sovereign Jewish presence in the Middle East.

There is nothing fringe about the signatories to this letter; they represent the coming generation of Jewish leadership — leaders who, when given the chance to leverage their moral voice, do so in support of Palestinians, not Israel. A generation of Jewish leaders who didn’t grow up associating the Palestinians with Munich and the murder of Klinghoffer. For them Israel is a privileged power and the plight of the Palestinians yet another example of racial and social justice in need of remedy. Their solidarity rallies mean something totally different than mine.

The tectonic shifts are also evident on Capitol Hill. The fact that 29 Democratic Senators called for a cease-fire, failing to make a distinction between attacker and defender, the fact that leading House members have called to put a pause on the sale of the very aid Israel needs to defend itself from its enemies, signals something.

The fact that historically fierce defenders of Israel in Congress have been silent in the face of anti-Zionism and antisemitism signals that they are more concerned about a political lashing from an energized left than about losing the tepid support of American Jewry for Israel.

This isn’t about who started the conflict, or that the ideology of Hamas is the antithesis of every liberal value progressives claim to hold dear, or that flag-bearing Palestinian thugs have beat up Jews on the streets of Los Angeles and New York this past week. It is about perceived power and about keeping power and the fact that right now a calculated shift is taking place. A whole lot of people are noting that American Jewish support for Israel is not quite the dependable and united front and force it once was.

How did we get here? Much of it has to do with a long-in-the-making divergence between an increasingly universalist American Jewry and an increasingly parochial Israel. The combination of politics and personality that has made progressive support for the policies of a right-wing Israeli government a nonstarter.

Whatever finger-pointing can be directed at American Jewry, though, we need only rewind the last decades of Israeli decision-making to realize that what we are seeing today is the chickens coming home to roost. The settlement creep, Israel’s inability to actualize a two-state solution, the nation-state law, the systemic inequities faced by Israel’s Arab population – in other words, Israel’s repeated inability to give expression to its foundational and fundamental aspiration of being both a Jewish and democratic state living side by side with a Palestinian neighbor.

As a Conservative rabbi, it goes without saying that it doesn’t help that the same Israel to which I am asked to direct my support has done pretty much everything it can do to make me feel that the Judaism I preach, teach and practice here in America is not even considered Judaism in Israel.

Where do we go from here? It is a daunting challenge. Perhaps at this point, the first step is to ensure that as individuals and as communities we model the kind of change it is we seek to see in this world.

A proud and unapologetic Zionism that also insists that we acknowledge and work on behalf of the right of Palestinians for self-determination. A Zionism that teaches our children to love Israel, to learn about Israel, to travel to Israel, to live in Israel and that one does not stop being a Zionist if one disagrees with decisions of this or that Israeli government.

We must nurture radical moderates, people who are willing to foster dialogue with people whose opinions differ from our own, communities that rejects the illiberalism of cancel culture, communities that are willing to listen to each other with empathy and curiosity, an earnestness to speak our minds even as we show a willingness to change our minds.

Maybe, just maybe, if we speak into the centrist megaphone loud enough and long enough, the sane center can become the sane majority, and American Jewry can regain its footing towards building a shared future with Israel.

In the end, I did not attend Sunday’s rally. Instead, I got on a plane to Israel, joining a UJA-Federation-funded rabbinic solidarity mission.

We are visiting those traumatized by the recent fighting; we are expressing gratitude to those leaders and soldiers upon whom the safety of Israel depends; we are visiting projects of Arab-Jewish cooperation. Most of all, some 20 rabbis with a diversity of views will be showing each other and the communities we serve a model for Israel engagement:perhaps most importantly, by showing that when someone is hurting, as Israel is now, you just show up.

For me, a mission to Israel. For another, a rally. For some, it might be supporting an organization whose mission is peaceful coexistence between Israelis and Palestinians; for others it might be supporting the soldiers of the IDF. Each one of us and all of us together must show up. We must do so because Israel needs American Jewry. We must do so because the world is watching. When it comes to Israel, there can be no sitting on the sideline. To not be actively engaged with securing the future of a democratic Jewish state is to abdicate the responsibility of what it means to be a Jew. You show up.

Cosgrove: I skipped Sunday’s pro-Israel rally and got on a plane to Israel instead