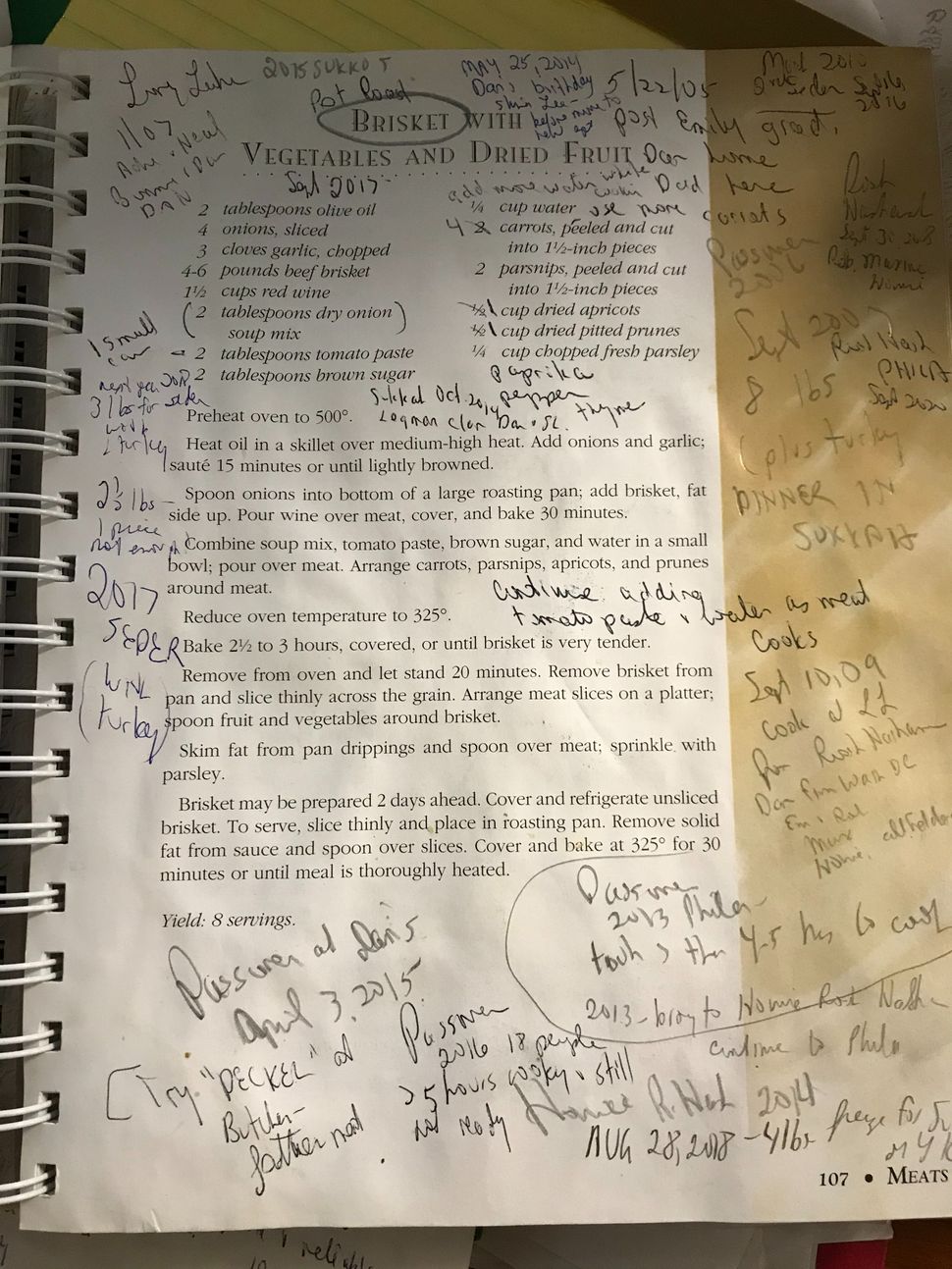 I swirled the last dab of icing on my pumpkin cheesecake, replaced the knife with a pen and scribbled on the top right corner of the recipe: “post(?)-pandemic — first time friends in house.”

Then I breathed a sigh of relief. My pandemic kitchen was officially closed.

Annotating recipes is nothing new for me. Who doesn’t revise the ingredients and directions?

My improvements include: “Reduce sugar by half;” “two eggs are enough;” “makes twelve muffins, not sixteen;” “don’t be shy with spices.” Sometimes, I must even confess to modifying a recipe to near-unrecognizability.

But the margins and corners of my annotations tell more interesting stories: Thanksgivings, baby namings and dinner parties. It’s not that I’m afraid of serving the same dish to the same people, though the thought occasionally crosses my mind. Rather, I want to preserve these memories the way a Mason jar preserves fruit.

I want to transform my cookbooks into a time machine.

When I see “snow day, Dec. 1993 and Feb. 1994” written on the French bread recipe in my tattered Moosewood cookbook, I immediately recall my school-age kids in pajamas in the middle of the day; they sleep until noon. The house smells like a boulangerie. The wind howls and the snow finds a home on the windowpanes and the deck.

Suzie Fishbein would be glad to know her chicken cacciatore recipe in The Kosher Palette is “good and reliable.” But for me, it’s more important to know that I made it for Rosh Hashanah 2009, when my son Dan came home from D.C. for the holidays. More recently, it was the meal we brought to Philadelphia when we met our not-yet-named grandson for the first time in January 2020.

I’ve annotated my brisket recipe so often that it looks like a page in the Talmud. There’s a comment, or should I say commentary, on every inch of the page. In 2007 and 2013 it was the main dish at my daughter’s Philadelphia seders. We enjoyed it when my son hosted his first seder in his New York apartment in 2015.

My mother wrote notes on her recipes, too, although I don’t remember ever seeing a cookbook in the apartment. Handwritten on scraps of paper or index cards, or newspaper clips , she had a small but robust collection of recipes. Her remarks were usually more practical than sentimental. For example, her stuffed cabbage recipe comes with a warning as bold as one on a medicine label, “DO NOT MAKE ON A HOT DAY.”

How do I know that she and my father went to a performance at Queens College on Saturday, October 23, 1993? Because on the reverse side of the ticket I see her recipe for chuck steak and vegetables!

When I see “Sadie’s Kasha Varnishkas” recipe on a frayed index card, I hear the clickety-clack of the mahjong tiles on Tuesday night. On a break between one bam and two crack, somehow Sadie’s old-world recipe must have come up!

My mom wrote her sweet noodle kugel recipe, (“Jimmy loves this”) on the blank side of an Emigrant Savings Bank deposit slip. Sometimes, when I make it 50 years later, I can still see Jimmy—my dad’s friend from Coney Island.

Her notes have followed me from kitchen to kitchen. I still savor her square matzah ball recipe, written on a nine-cent-stamped postcard addressed to me in 1976.

With this family history, is it any wonder that Covid-19 would appear in my cookbooks? Beginning March 2020, every recipe I made I prefaced with the word “pandemic.” I expected this to be a blip in my cookbook entries but, fifteen months and hundreds of recipes later, “pandemic” is emblazoned all over, an ugly mark in my beautiful books.

My Sesame Seared Tuna recipe (“excellent, splatters but worth the mess, Labor Day Weekend, 2015, E. & L. visit”) became “pandemic” Sesame Seared Tuna. Each time I baked Zucchini Nut Bread, I marked it “pandemic.” I wanted my kitchen to reflect our dystopian universe. Each recipe tells the story of cooking for two, making birthday cakes shared on Zoom and getting food deliveries because the supermarket was too dangerous.

On the other hand, each recipe reminds me how lucky we were. We rationed and hoarded, scrubbed and stored groceries overnight in the garage. But we were spared the interminable lines at food pantries all over the country. As the death toll continued to rise to a terrifying crescendo, my pandemic recipes increased in the safety of my lonely kitchen.

So on May 15, when I baked pumpkin cheesecake and invited vaccinated friends into the house for the first time, a new chapter in my cookbook diaries began. When I make the recipe in the future, I will shudder at the memories of the pandemic and feel that sigh of relief when my kitchen opened for business again.

I never could have imagined that “cheesecake” (“use less sugar, sprinkle with cinnamon, freezes well”) and “friends in the house” would inspire a “Shehecheyanu” moment. But it did.

Merrill Silver is an ESL teacher and freelance writer who lives in New Jersey. Contact her at merrillsilver.wordpress.com.