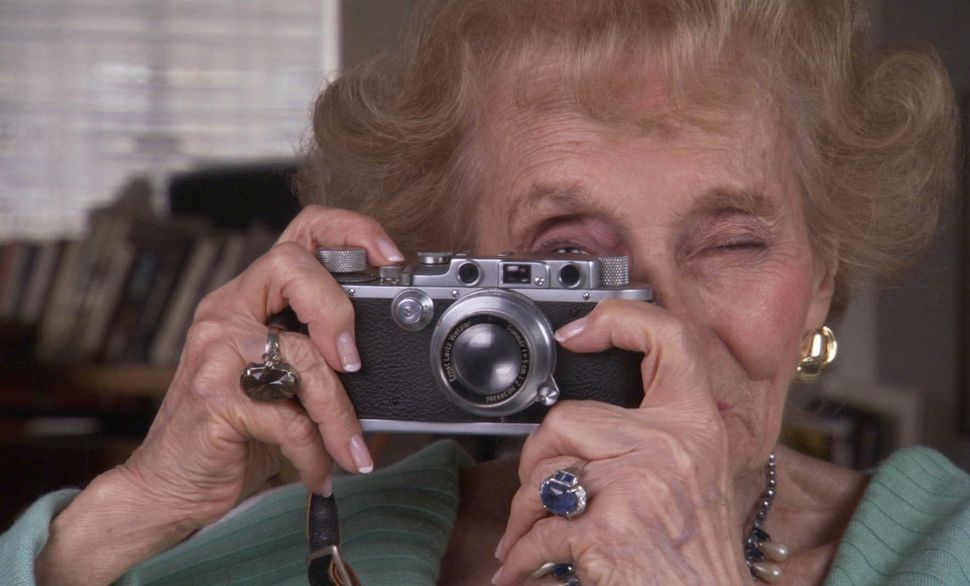 Abroad or At Home: Ruth Gruber and Leica, 2009. Image by Reel Inheritance Films

Ruth Gruber, a ground-breaking journalist, woman of deep integrity and no-nonsense photographer who reported on Jewish rescues from Nazis as well as exiles in the Soviet Arctic died on November 17, aged 105. When most American reporters were stuck at home or needed a specialized photographer to make images, she doggedly bucked the trend taking iconic photographs and writing the story that Leon Uris would use for “Exodus.” I had the fortune to meet with her on the eve of her 100th birthday to discuss a biographical movie about her that had just premiered. In welcoming me to her home and in rehearsing some of the stories she must have told a thousand times, she was gracious, curious and, about some things, still angry! — Dan Friedman

Movie stars are a cosseted bunch. These days even those who are merely stars of documentaries are often surrounded by aides and press agents, minders and interns. You would think that sort of treatment would be doubled and redoubled for a woman who is, at 99 years old, a somewhat frail national treasure.

Not so for Ruth Gruber. Looking forward to the premier of the film “Ahead of Time” at the Toronto International Film Festival last year, she invited me to her beautiful but modest apartment just next to Central Park, to talk about the film and her life. With the unassuming directness of someone who knows her abilities, she enlisted me to help her with a couple of domestic chores and to move us from the kitchen to her living room-cum-study. 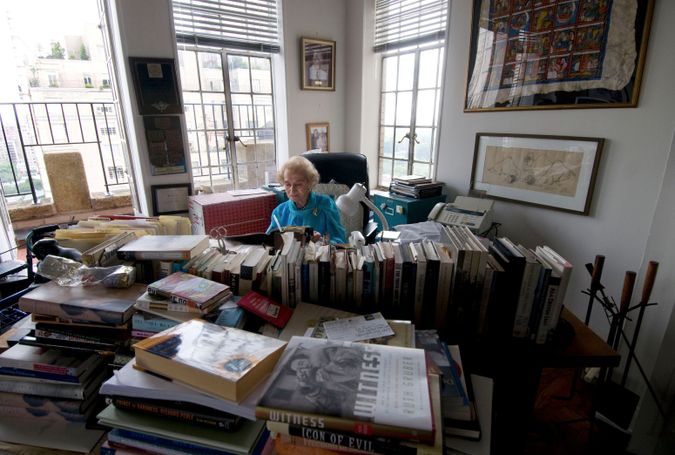 At Home: Ruth Gruber working from her apartment in 2009. Image by Reel Inheritance Films

It was difficult to imagine this woman studying at New York University at 15, going to an early Hitler rally while in Germany, becoming the world’s youngest doctor of philosophy, heading to Alaska and Siberia to report on women’s lives, taking the temporary rank of general in America’s Army for a special diplomatic mission and — between her general reporting on the postwar action of the Allies and her work covering the 1947 UNSCOP mission — having a significant effect on the early and pre-state situation of Israel.

But those are just a few of the things that Gruber actually did. And she achieved them, as our review of the film points out, before she turned 40. Despite our distance from those events, her scrupulousness about their details is still in evidence. Even the crucial event of her postwar — reporting on the refugees from the ship, the Exodus — she still feels is misrepresented:

Even people who should know better say they went to Cyprus, they never got to Cyprus. The movie called “Exodus” was an excellent movie but it opens in Cyprus. They took the Cyprus part right out of my book “Exodus, 1947” but I spent a whole week waiting for the Exodus people. I spent it waiting with the people who were there, but they were not from the Exodus.

While we ate watermelon she talked me through the story of how she took the picture of the flag — the British Ensign on which the refugee prisoners from the Exodus, now on the Runnymede Park, had painted a swastika. Photographs had not been allowed and, indeed, she was the single journalist chosen to represent the American press. But she was allowed onboard, despite her heavy camera being in evidence: “It kept hitting him in the side, but he didn’t seem to notice.” 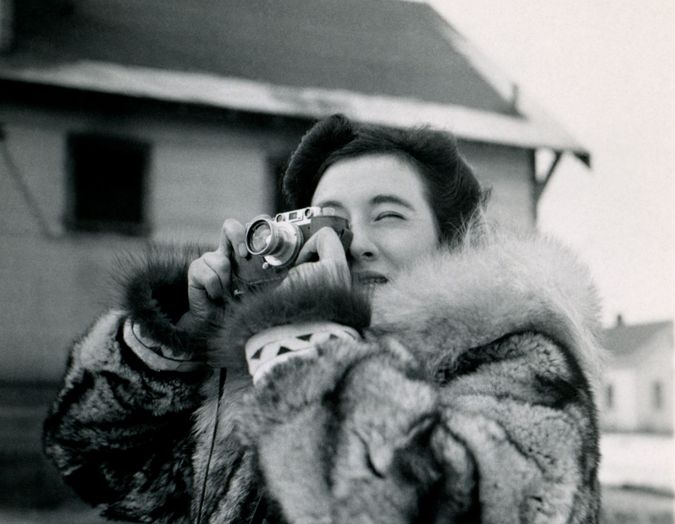 Her memory for detail was exquisite — the captain who “danced never walked,” the soldier with red hair, the dress of the British sailors. After 19 books, perhaps these stories have embedded themselves in her psyche. The stories she told, however, were not rote retellings but were stories she told as if it were 1930 just last week.

Despite her current Manhattan dwelling, she was born a Brooklyn girl and she remembered her Brooklyn teachers fondly. In “Ahead of Time” she expresses bewilderment that one of her grade school teachers prophesied that she would become a writer. But she was already at NYU by the age of 15:

As a freshman I decided to take German, all my friends were German, I loved Beethoven, Bach, Goethe, Schiller and Rilke, I had taken French and Spanish at high school, languages came easy — science and math never took root.

My professor was Adolph Meyer, he said ‘If you think you are going to sail through German because you know Yiddish you are out of your cotton picking mind.’

She traced her love of German culture through her adventures in Cologne, her return home and the transition into journalism through the Herald Tribune, who had the foresight to send her out on foreign assignment despite her obvious youth. She detailed her adventures in Siberia and her liaisons with reporters and officials in Siberia and Moscow. She studied Russian, though she “never internalized it” but it seemed to her that many of the dissidents spoke German, while the spies did not. 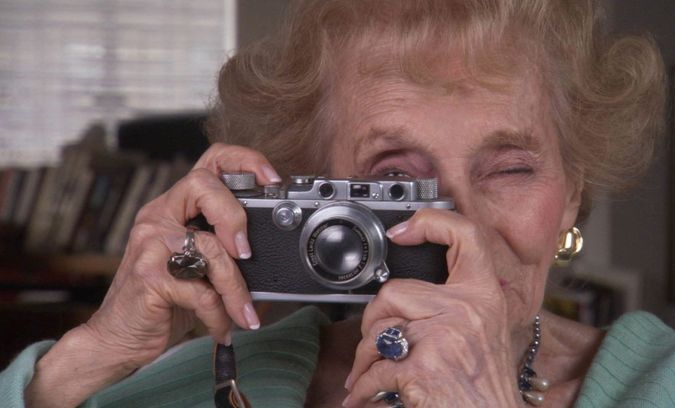 Abroad or At Home: Ruth Gruber and Leica, 2009. Image by Reel Inheritance Films

Her dogged achievements in documenting arctic lives (first Siberia, later Alaska) seemed matter of fact to her. But her ability to persevere in the face of the cold, the strangeness of local culture and (in Russia) the unremitting attentions of the Russian secret service would serve her well during her journalistic career.

After a couple of hours chatting with Ruth and barely scratching the surface of that formidable career, I explained that my family was waiting for me nearby, already a little impatiently, as I had run over by nearly a full, pleasant hour. She prevailed upon me to help her with an email. Was this an email to a friend or family member? A note to her director perhaps? No, it was book review that she wanted to attach to send to her editor and get confirmed delivery. Eighty years after her doctoral thesis had been approved, she was still writing about books — and getting her facts right.

‘Ahead of Time’ is opening at New York’s Angelika Film Center September 10 and in Los Angeles at the Laemmle Theaters on September 24.