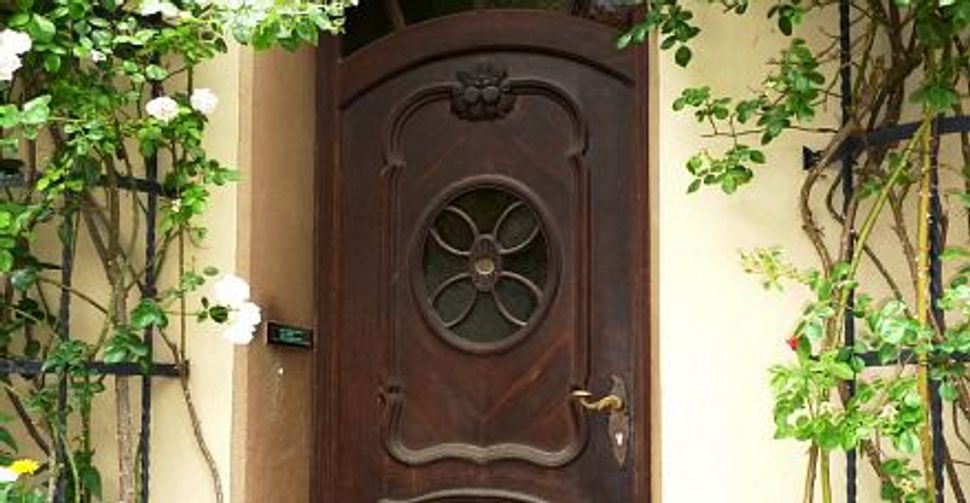 Ante-Semitic: This is how philologists believe ?daled? evolved in Hebrew and other comparable languages.

Reader Reuven Kalifon wonders why Ashkenazi tradition calls the fourth letter of the Hebrew alphabet “daled” even though its name is spelled ת‭-‬ל‭-‬ד (read right to left, daled-lamed-taf) and the final, dagesh-less taf is always pronounced as an ‘s’ in the Ashkenazi world. This is the same taf that we have in the letter bet, pronounced “bes” by Ashkenazim, and in the letter tet, pronounced “tes.” Why, then, isn’t it “dales” rather than “daled,” which seems to make no sense?

I’m glad Mr. Kalifon has asked, because having written on this subject many years ago, I now have a new theory.

Some of you may need a bit of help to understand the question better. The Hebrew alphabet has six letters — bet, gimmel, daled, kaf, peh and taf — which can be written either with or without a small dot in them, known as a dagesh. In antiquity, the presence or absence of the dagesh reflected the pronunciation of all six, determining whether they were plosives (that is, sounds like “p” that are made by a sudden, one-time release of air) or fricatives (sounds like “f” that can be prolonged by a gradual release of air.)

In medieval and modern Ashkenazi Hebrew, however, the dagesh reflects differences in only four letters: the bet, which is articulated as a plosive “b” with the dagesh and as a fricative “v” without it; the kaf, which is “k” with and “kh” without; the peh, which is either “p” or “f,” and the taf, which is “t” or “s.” (In Sephardi and Israeli Hebrew, the taf is always “t,” whether it has a dagesh or not.) Since these four letters take a dagesh at the beginning of syllables and are dagesh-less at the end of them, this means that in Ashkenazi Hebrew, bet, kaf, peh and taf are articulated as “v,” “kh,” “f” and “s” at the end of words, a process known to linguists as spirantization.

And now to get back to the fourth letter of the Hebrew alphabet, pronounced “dalet” by Sephardim, “daled” by Ashkenazim, and — under Ashkenazi influence — “daled” by most Israelis. As Mr. Kalifon also observes, the name of this letter, akin to the Greek Delta, comes from the Hebrew word for “door,” which is delet in Sephardi and Israeli Hebrew, deles in Ashkenazi Hebrew, and was pronounced deleth in biblical times, with the “th” as in the English word “three.” It was the loss of the “th”-sound of the dagesh-less final taf in post-biblical Hebrew that turned it into “t” in the Sephardic world and “s” in the Ashkenazi world — and that indeed should have turned the letter daleth into Ashkenazi “dales.” Why didn’t it?

Actually, in some places it did. As Yiddish linguist Dovid Katz points out in his article “The Phonology of Ashkenazic,” there were varieties of Western Yiddish — the now practically extinct Jewish language once spoken in Germany, Holland and Switzerland — in which Jews did say “dales.” Not only that, they also said “lames” instead of lamed and “yus” instead of yud, even though Jews everywhere spelled the names of these letters ד‭-‬מ‭-‬ל (lamed-mem-daled) and ד‭-‬ו‭-‬י (yud-vav-daled), with no taf at the end of them. How can we explain this?

Since Katz doesn’t attempt to, I’ll give it a try. As those of you who know some Dutch or German are aware, there is a process in both these languages known as lenition, whereby certain voiced consonants at the end of words lose their voicing — that is, whereby a sound like “d” turns into a sound like “t.” Thus, for example, German Hand, “hand,” is pronounced “hahnt”; German Tod, “death,” is pronounced “toat,” etc. This phenomenon already existed in medieval times.

What I would hypothesize is this: Since lenition affected Western Yiddish speakers, too, Hebrew words ending with daled were also de-voiced, so that lamed became “lamet” and yud, “yut.” The result was that there were now six Hebrew letters — bet, dalet, ḥet, tet, “yut,” and “lamet” — that were grouped together in the popular mind as if they all ended with taf, and since Ashkenazim spirantized the final taf, they did it with “lamet” and “yut,” as well, producing the sequence “bes,” “dales,” “ḥes,” “tes,” “yus” and “lames.”

Next, let’s assume there was a reaction to this by more educated Jews, who, knowing that lamed and yud should not be grouped with “bes,” “ḥes” and “tes,” succeeded in getting ordinary Jews to revert to their final “d” sound — in the course of which, however, by a process of overreaction, this correction adhered to “dales,” as well, so that it detached itself from the bes-ḥes-tes group and joined the lamed-yud group as “daled,” a pronunciation that proceeded to spread throughout Western Yiddish, eventually entered Eastern Yiddish and became ubiquitous throughout the Ashkenazi world.

It’s only a hypothesis, of course, and perhaps no more correct than my earlier one, but the history of progress tells us that a wrong hypothesis is preferable to none, since it may stimulate others to think of a better one. I’m open to suggestions.

Questions for Philologos can be sent to philologos@forward.wcom