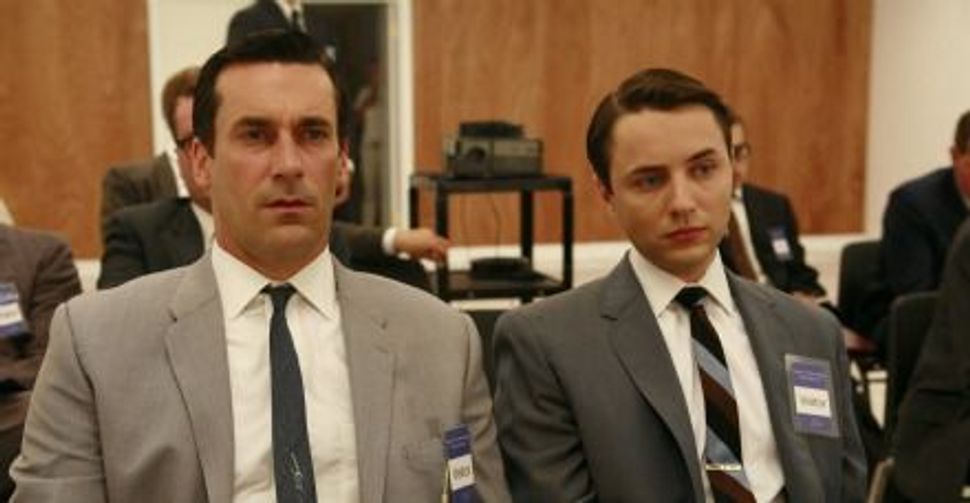 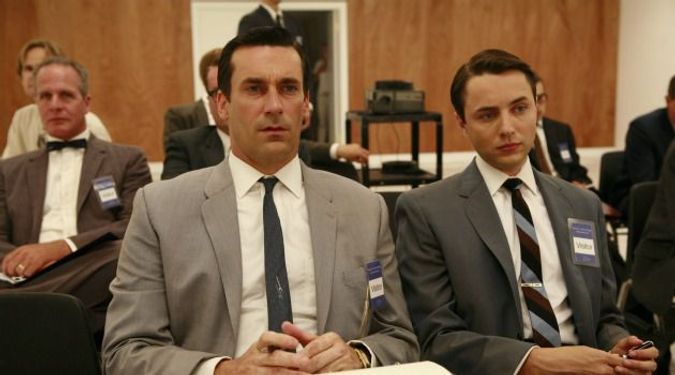 ?Mad? Lingo: Love it or hate it, advertising is often at the cutting edge of cultural transformation. When ?halachic? starts showing up in ad copy, chances are it is going mainstream. Image by courtesy of lionsgate

Whatever we may think of advertising — a capitalist tool, an agent of manipulation, a bravura display of wit and verbal dexterity, the stuff of an irresistible television show such as “Mad Men” — it’s hard to conceive of modern life without it. In the absence of advertisements, whether print, electronic or digital, our newspapers, magazines and websites would be thinner, our encounter with radio and television briefer and our appetite for cars, jewelry, deluxe vacations and all manner of pharmaceuticals diminished considerably.

We’d also miss out on crucial bits of information, like the warning — or was it a pronouncement? — that recently appeared on the back of the box of kosher-for-Passover Bartons assorted jelly slices. Dutifully alerting consumers to the fact that these candies had been produced in a plant in El Salvador (El Salvador?!), where “airborne trace particles of milk, nuts, wheat, soy, eggs and fish may be present,” the text went on to note that “this has no halachic significance but may trigger allergic reactions.”

I’ve come across a lot of advertisements in my professional career as a historian, from those that appeared in the early 20th-century Yiddish press, extolling the virtues of “scientifically baked” matzo, to those that adorned New York City’s subway platforms, promising would-be consumers that they didn’t have to be Jewish to enjoy a slice or two of Levy’s rye bread. I’ve listened to Sammy Davis Jr.’s crooning of “Man-O-Manischewitz,” which filled the airwaves for a spell, and watched on the tube as Hebrew National cleverly invoked a higher authority to sanction its kosher meat products.

The $64,000 question — another canny example of advertising lingo — is what to make of it. Might “halachic” be taking its place alongside other Jewish words that have become part and parcel of the American idiom, like “schlep,” for instance, or “chutzpah” or “mitzvah”? Might its appearance on the back of a box of candies herald its linguistic coming of age, its integration into common parlance?

Would it also be fair to say that deploying the word in a food-related context is of a piece with finding the phrase “under rabbinical supervision” or “kosher” on other mass-produced food items? Today, we’re accustomed to seeing these ritually rooted words, but they, too, were once new and unfamiliar and, to some observers, even as startling as “halachic.” Perhaps, then, the use of this word is just the latest iteration of a consumerist practice that began well before most of us were born.

At this juncture, I’m sure several of my readers are wondering why I’m making such a fuss over the appearance of a word that has enjoyed widespread currency within observant American Jewish circles for quite some time now.

But that’s precisely the point. The ways in which linguistic referents like “halachic” make their way from traditional Jewry into the broader world and onto the packaging of a candy that is sold within the suburban supermarket say a lot about us, from our expanded vocabulary to current preoccupations with the parameters of our spiritual and physical health and, yes, even market share. Circulating freely into one arena from another, an internal concept has gone external.

For years now, historians of American culture have effectively drawn on advertisements as primary sources that reflect and comment on American values, ideals, aspirations and behaviors. So, too, have historians of American Jewish culture who have ably mined advertisements about furniture and food, housing stock and recreational outlets to take the measure of the American Jewish experience.

If past performance is any guide, I suspect that future generations will follow suit and associate the broad-based, public use of “halachic” with the reality of American Jewish life, circa 2012. It’s a telltale clue — one of many, to be sure — of who we are.

In the meantime, we can always ask the voluble and plaid-clad Mr. Ginsberg, the most recent addition to the cast of “Mad Men,” what he thinks. He’s sure to have an opinion.