When Mom and Pop Owned the Shop 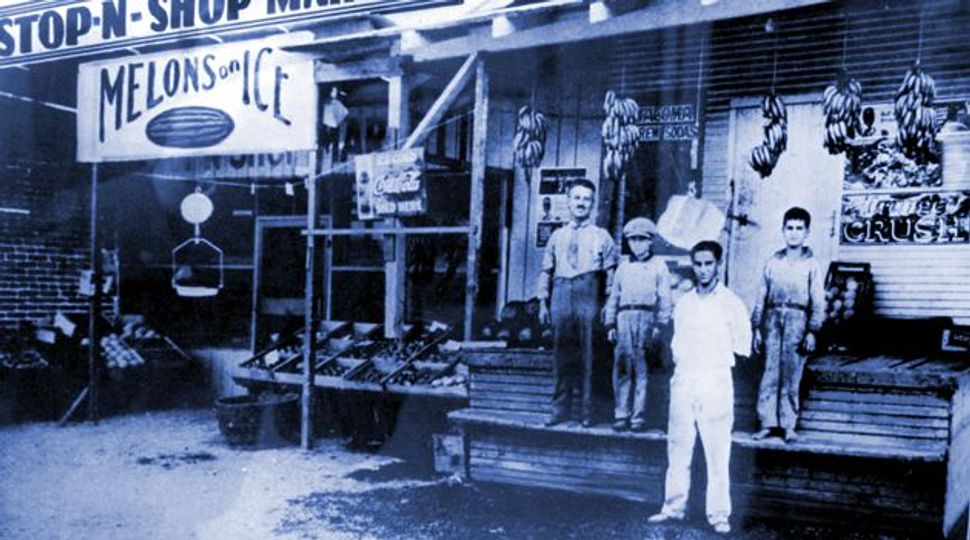 All in the Family: Using children and other family members to staff the store saved money, but bred resentment. Image by Wikimedia Commons/Kassis Family

Food, glorious food is what virtually everyone I know talks about incessantly. What we ate, where we ate it and who made it constitutes a hefty chunk of our daily conversational fare. But were it not for the urban grocery store, that all-but-vanished institution, we wouldn’t be singing the praises of mozzarella, olive oil and multigrain bread in the first place.

Neighborhood fixtures, grocery stores once abounded in urban America, especially within its immigrant enclaves. Nearly every block had one. Family-run enterprises known colloquially as mom-and-pop stores, they had several basic things going for them. For starters, they required very little by way of start-up capital, much of which was obtained either from one’s slightly more flush relatives or through the good graces of free-loan societies. In 1913, nearly 300 grocers in the greater metropolitan New York area received an interest-free loan of upward of $100 from the Hebrew Free Loan Society, just enough to set up shop or tide them over.

As their name suggests, mom-and-pop stores were also characterized by the availability of free labor: Everyone in the family, even the kids, was expected to, and usually did, pitch in — tending to the customers, stocking the shelves, wrapping orders in brown paper and delivering purchases by foot or bicycle (which is how some learned to ride a bike in the first place). Living above or behind the store, the family was constantly on call, summoned by a knock on the door and by the cry “Customer in the store,” which sent you “running out,” recalled Ruth C., the daughter of a Washington, D.C., grocer of the 1940s, in an interview with the Jewish Historical Society of Greater Washington some years ago.

While the use of family members undoubtedly helped to save money, this practice bred resentment, especially on the part of the household’s youngsters. Ruth C. recalled that “the only time you were really excused is if you had a big test the next day and [were] sitting with all your books; [then my father] would try not to bother you.” She continued, somewhat plaintively, “If you had a date or you had to go somewhere, forget it.”

Pooling all their resources, most American Jewish grocery store owners eked out a modest and possibly even a comfortable living. A number did better than that, of course, and were able to parlay their profits into the wholesale grocery business or that of the emerging world of the supermarket. Some of the Northeast’s leading chains — Stop & Shop, Giant, Daitch Shopwell’s, Mayfair Supermarkets and Waldbaum’s, among many others — started out as humble mom-and-pops owned by Jewish mamas and papas. But the overwhelming majority of grocers had no such luck, and instead spent their days within the crammed contours of their small shops, packing and unpacking boxes, shelving and restocking goods and tending to the needs of their customers, which, in their own way, were as taxing as the physical demands of the job.

The grocers’ lot left them tuckered out — or, as one shop-keeper’s child observed of her father, “tired of being tired” — and with little free time. The memoir literature, including the oral histories compiled by the Jewish Historical Society of Greater Washington, are replete with references to the temporal constraints that went hand in hand with owning a grocery store. For most, observing the Sabbath was out of the question; Sunday was, at best, a half day, and just about the only time the store closed its doors entirely was on Rosh Hashanah and Yom Kippur.

Leaving little time for the grocer’s family to breathe, the neighborhood grocery store provided breathing room for others. The extension of credit to many of its customers enabled them to escape the proverbial “wolf at the door.” It also enlarged their encounter with America. The range of products the store carried — the canned goods and packaged cookies stocked tidily on its shelves, the bunches of bananas cascading from its ceiling — exposed customers to a new and decidedly American palate, transforming the grocer from a proprietor to a culture broker.

Where did immigrant Jews get their first look at Uneeda Biscuits or have their first taste of a new fruit? Why, at the local grocery store. It’s also been said, perhaps a bit fancifully, that this neighborhood institution quite literally enlarged the immigrants’ general vocabulary along with their culinary one: By reading the labels and instructions on the modern food products they purchased at the grocery store, newcomers learned a few key English phrases, especially those having to do with eating.

A site of Americanization and of expanded horizons, the local grocery store also sustained connections to, and nourished an appetite for, traditional Jewish foods, especially in those cities like Charleston, S.C., and Washington, D.C., whose Jewish population was not nearly as numerous as those of its metropolitan counterparts. In Charleston, Elihu Mazo’s grocery at 478 King Street and his brother George’s shop down the block at 171 King Street was where Southern Jews might go to purchase matzo for Passover, and the pot cheese that went into blintzes for Shavuot. Year round they could purchase briny pickles, as well as flour for making lokshn, or noodles. Epstein’s Ideal Market at 1629 13th Street, NW, in turn, was where Washington, D.C. Jews might submit a coupon in exchange for a free copy of the Maxwell House Haggadah.

At once indispensable and taken for granted, the grocery store owner sought out the company of other grocers. Banding together, they formed trade associations that not only expanded their purchasing power, but also provided opportunities for socializing and for exchanging ideas. The District Grocery Stores, of Washington, D.C., was one such organization. Established in 1921 by 12 Jewish grocers, it lasted for more than half a century, familiarizing what grew to be its 300 members with modern forms of merchandising. It also operated a warehouse with the latest amenities, including coolers for frozen foods and banana-ripening rooms, and screened films such as “Know Your Money,” which trained storeowners in how to spot counterfeit bills and avoid other occupational hazards. The Atlantic Grocer, a trade magazine, reported in 1940 that a Mr. Stringfelter, a longtime customer of the Sunbeam Market who also happened to work for the “Secret Service in the Treasury Department,” introduced the film.

More commonly still, the members of the District Grocery Stores sent Rosh Hashanah cards to one another and to their customers, wishing them a “prosperous New Year”; sponsored summertime outings to local beaches; fielded a baseball team, and held an annual dinner at the local Jewish community center. Likened to a “big deal” at which parents and children dressed to the nines and danced the night away, or so recalled one participant, this annual gathering also offered the opportunity for members to deepen their familiarity with songs that ranged from “My Old Kentucky Home” to “Hatikvah” by publishing their lyrics in its souvenir journal.

Like so many other institutions in modern Jewish life whose history has been unsung, the humble neighborhood grocery store — largely a one-generation phenomenon — deserves to be applauded. In the business of transforming its American Jewish customers into members in good standing of the American food nation, it made them into more fully realized Americans.

When Mom and Pop Owned the Shop