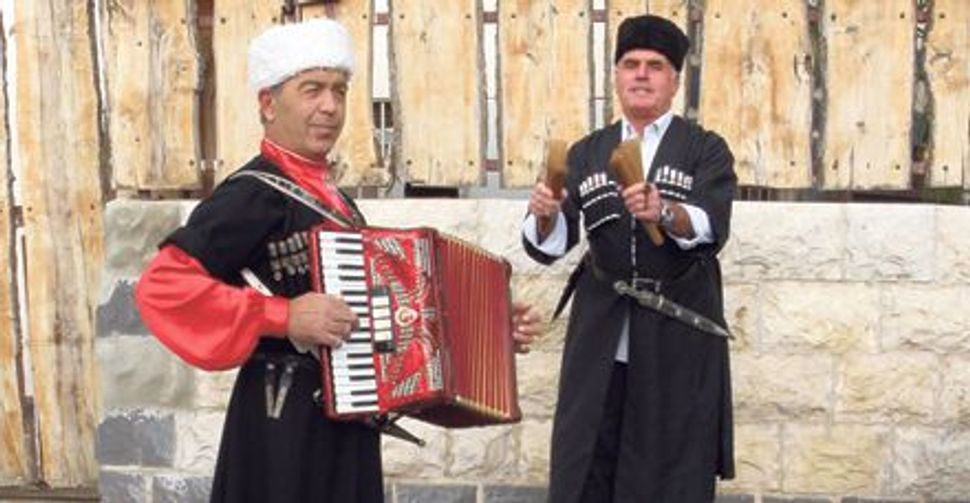 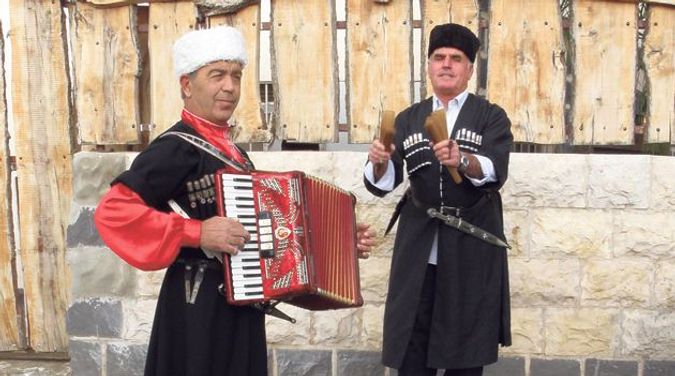 Beneath the Green Hills of Galilee: Traditionally-dressed Circassian musicians perform in the village of Kfar Kama. Image by Ron Almog

Israel was born as a sanctuary for a people banished from their homeland, harassed in exile and ultimately subjected to mass murder. But there is more than one population here that meets this description. For, the Jewish state is home to another dispersed, insular and tradition-bound nation that has suffered through the trauma of exile and one of the most devastating genocides of modern times.

Some 1.5 million Circassians were killed in the Caucasian War of the mid-to-late 19th century, and another million — fully 90% of the population — were deported from their land in the Caucasus Mountains. Today, roughly 4,000 Circassians live in Israel, where they constitute the country’s only Sunni Muslim community that sends each of its sons to the military.

“We’ve traditionally been friends with both Jews and Arabs, even when they were fighting among themselves,” said Zoher Thawcho, the 39-year-old co-founder of the Circassian Heritage Center in Kfar Kama. “We don’t see everything Israel does as holy, nor what the Arab states or Palestinians do…. It’s not as if we say, ‘From now on we’re with you, so we’re enemies of the other.’”

Most Circassians (sur-CASH-ins) took refuge in the lands of the Ottoman Empire. Today, 2 million of the world’s 7 million Circassians live in Turkey, with another 120,000 in Syria and 100,000 in [Jordan][5]. Circassians were Christian for 1,000 years, but from the 16th to the 19th century became Islamized under the influence of Crimean Tatars and Ottoman Turks.

In Israel, the community is spread across two villages in the green hills of the Galilee: Kfar Kama — 13 miles southwest of Tiberias, population 3,000; and Rehaniya — nine miles north of Safed, population 1,000. In the 16th century, the Circassians also founded Abu Ghosh, now a famous restaurant town located west of Jerusalem, but their progeny long ago adopted the Arabic language and culture of their surroundings.

“Circassians are like a prism that shows just how polarized Israeli society is,” said Chen Bram, an anthropologist who is currently working as a professor at the University of Florida. “It’s as if someone who doesn’t fit into the category of either Jew or Arab is from another planet. They’re neither here nor there.

“In terms of their day-to-day lives, both politically and ideologically, they’re closer to Jewish society. But in recent years, on the margins, there has also been more identification with their Islamic identity. I attribute that to a reaction to various racist remarks that have been thrown their way.”

In 2009, Circassians and Druze (an Arabic-speaking people who follow an arcane offshoot of Islam) staged a joint month-long protest against what they described as government discrimination, alleging that the two communities received less state funding than their Arab or ultra-Orthodox counterparts. After protracted negotiations, the government last year allotted NIS 680 million ($170 million) to shore up education, employment, housing and tourism for both populations.

The modern histories of Jews and Circassians in the Holy Land are intimately intertwined. Circassians first settled in Kfar Kama in 1876, Rehaniya in 1878. Four years later (and just 10 miles away), Zionist immigrants established Rosh Pina, the first Jewish agricultural settlement in the Galilee.

Circassians helped Jewish immigrants — many of them illegal — reach the Promised Land. “There was no Ministry of Immigrant Absorption back then. It was the Circassians who took in those immigrants,” said Khoon Shawki, proprietor of Rehaniya’s Circassian Museum and Sausruka restaurant.

“The major division in the Galilee at the time wasn’t between Arabs and Jews, but between sedentary people and Bedouin nomads. The nomads demanded protection money from all the sedentary communities,” Bram said. “The Circassians, who were sedentary and themselves had come from outside, easily made ties with the Jewish settlers. Later, when the national conflict between Jews and Arabs began in the British Mandate period, the Circassians generally took neutral or pro-Jewish stances.”

The Circassians identified with the Jews’ history of exile and dispersion, and cordial relations were also aided by the fact that many Jews and Circassians understood Russian.

Israel’s Circassians generally no longer speak Russian, but they continue to be remarkable polyglots: Most of their children are fluent in Hebrew and Arabic, learn English at school and their Circassian mother tongue at home. The language (also known as Adyghe) is written in Cyrillic script and is one of the world’s oldest and most difficult to learn.

Circassians have a reputation as a warrior people who, until succumbing to imperial Russia, had defended their strategically located homeland against invaders from Persians to Huns and Mongols. In the decades after Israel’s creation, male members of the community flocked to the defense establishment, particularly the border police. But they can be a laconic lot, too, and Thawcho says that over the years, that reserve has kept some of them from getting their due rewards.

“We as a people are quiet and shy, in the positive sense of the word. A Circassian won’t elbow out a rival who is vying for the same position. Sometimes if you don’t do that, you stay in the same place. That’s how it works in the Middle East.”

Nonetheless, in recent years the community has been making its mark far beyond the defense arena. Today 80% of Circassian youth complete a postsecondary degree. Circassians are even making waves in international soccer: Kfar Kama’s Bibras Natcho is a midfielder on Israel’s national team. After four seasons with Hapoel Tel Aviv, he now plies his trade for Russia’s Rubin Kazan team.

Five years ago, Druze and Circassian authorities launched an ongoing marketing initiative to encourage Israelis to visit its communities’ bed-and-breakfasts, tour its landscapes and enjoy its culture.

The Circassians have prospered in the Jewish state. Still, for many, their first loyalty remains to their scattered, beleaguered nation, and some espouse an ideology that Israelis will find familiar: the aspiration for a national home in the land from which they were forcibly banished.

“We need to gather all the Circassians in the same place; whether it’s autonomy, a republic within Russia or a proper state, it’s a bit early to say,” Thawcho said. “But it has to be in Circassia — not Uganda or anywhere else.”

The bulk of historical Circassia lies in what are today the southern Russian republics of Adygea, Karachay-Cherkessia and Kabardino-Balkaria, and the prospect of Russia allowing the return of millions of exiles to Circassia seems far-fetched: Moscow keeps a tight grip on its Caucasian republics, and in recent years has suppressed resurgent nationalism in nearby Chechnya and Dagestan.

“We’re a nation, with all that implies: We have our own language, customs, clothing, music, food and — at one time — a single geographic location,” he said. “It might not be in my lifetime, but there will be a Circassian state. As someone once said, ‘If you will it, it is no dream.”

Oren Kessler, a writer based in Tel Aviv, is the former Middle East affairs correspondent for The Jerusalem Post.