Strange Case of a Death in Venice 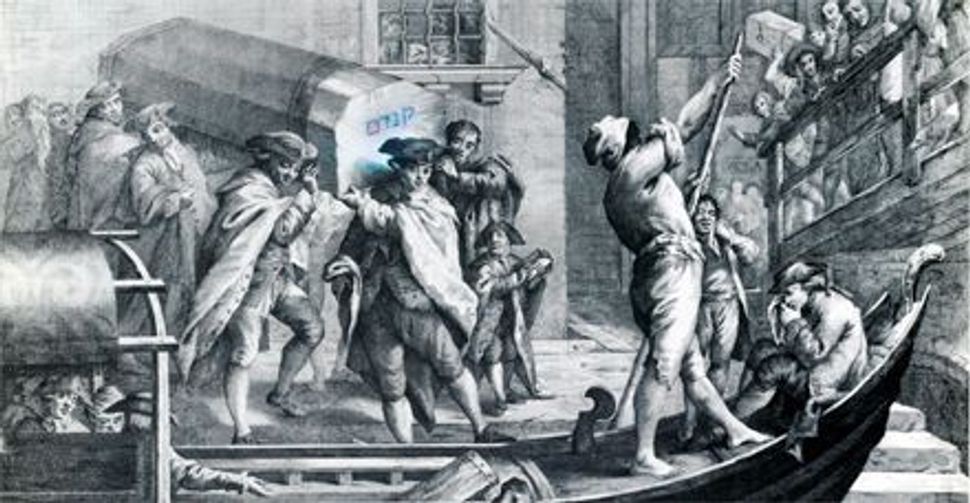 Image by Courtesy of Isaac Pollak 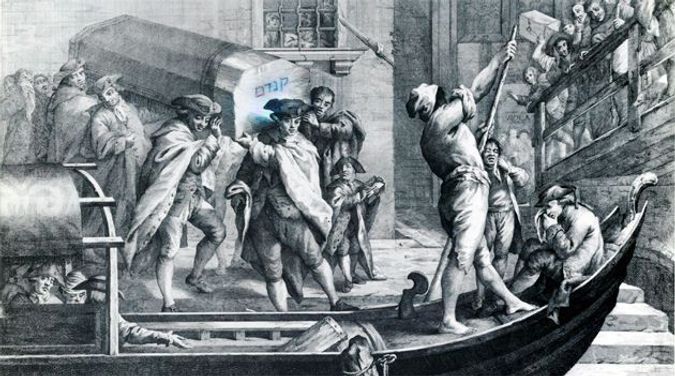 Isaac Pollak of New York City has sent me a photograph from his private Judaica collection of a late 18th-century engraving by an Italian artist named Giovanni del Pian. Part of it, showing several men emerging from a house to lower a wooden coffin with Hebrew lettering into a gondola, appears alongside this column.

At the bottom, in cursive Italian, is an explanation (the English translation is Mr. Pollak’s) that the engraving is a portrayal of “the Jewish rite of transporting a body to the grave, which is in a field outside the city. The coffin is carried by four Jews, accompanied by the closest relatives, dressed in mourning clothes, as well as many others. As they approach the grave, they recite prayers together until the coffin is placed in the ground. Then they circle the body seven times, put the coffin in its hole, and fill it with the earth that was removed, some throwing handfuls of it into the tomb for devotion.”

The city in question is obviously Venice, whose Jews still lived at the time in Europe’s oldest ghetto. The various customs described — the four coffin bearers, the circling of the seven times, the symbolic throwing of earth — are all known Jewish rituals, even if no longer practiced by most American Jews. What is odd, though, are the Hebrew letters, which, Mr. Pollak writes, “have long puzzled us in the collecting field.” Traditionally, he points out, Jewish coffins never had writing on them; Jewish law decrees that coffins be as simple as possible in order to stress all men’s equality before God’s judgment, and no decoration or adornment indicating wealth or importance is permitted on them. (Although in ancient times, it is true, Jewish sarcophagi were sometimes lavishly decorated and inscribed, these were used not for burial, but for preserving the disinterred bones of the dead in family vaults.)

And even stranger is the writing itself. The Hebrew characters on del Pian’s coffin — kuf, nun, daled and mem — seem to make no sense. They do not spell any known Hebrew word, nor — if one tries reading them as an acronym or combination of the first letters of several words — any known Hebrew phrase or invocation. They are, Mr. Pollak writes, a “200-year-old mystery” that he hopes I can solve.

It’s flattering, of course, to be turned to with a puzzle that has stumped the experts, and it would be wonderful to come up, Sherlock-Holmes-like, with an obviously correct solution and proclaim, “Elementary, my dear Mr. Pollak!” Alas, I can only make a guess — a wild one, some of you may say. But nothing ventured, nothing gained, so wild or not, here goes.

Let’s start with the fact that Jewish coffins have no writing. Del Pian (a minor artist about whom I have not managed to discover anything) must have known this, because he obviously spoke to Venetian Jews about their burial customs and was familiar with these. Why, then, did he put Hebrew letters on the coffin anyway? It must have been for his engraving’s gentile viewers — that is, because although he knew he was being inauthentic, he wanted these viewers to realize at a glance that they were looking not at the commencement of just any Venetian funeral procession, but at that of a specifically Jewish one.

Now put yourself in his position. He couldn’t very well have said to a Jewish acquaintance, “I know you Jews don’t write on coffins, but what would you write if you did?” All he could do was think of something pithy that seemed appropriate and ask a Jew how to say it in Hebrew. Being a sympathetic Christian observer of life in the Jewish ghetto who lived in the age of the Enlightenment, he wanted this something to convey the Jew’s essential humanity and commonality with his Christian fellow man. He was also familiar with the oft-quoted New Testament phrase Ecco homo (in Latin) or (in Italian) Ecce l’uomo, “Here is the man,” uttered by Pontius Pilate as he sent Jesus to his death. Well, then, why not have the coffin say not ecco l’uomo, but ecco uomo, “Here is a man,” a human being, in death as in life, like any other? And so del Pian turned to his acquaintance and asked: “How do you say, ‘Here is a man’ in Hebrew?” “Kan adam,” the Jew said.

Del Pian didn’t ask how to spell it, because he would then have had to explain why he wanted to know, and he didn’t wish to do that. And so he wrote it down in Italian characters as the single word that he heard, and went off to consult a Hebrew alphabet chart. Knowing that Hebrew was written without vowels but not that kan, “here,” is spelled kaf-alef-nun, he wrote it as kuf-nun, while assuming that the initial “ah” sound of adam was an unwritten vowel beneath the nun. Hence, the four letters kuf-nun-daled-mem: Kanadam, “Here is a man.”

It’s far-fetched? Maybe. And the idea of standing before God’s judgment isn’t? That won’t keep us from observing Yom Kippur in a few days, which is why this struck me as a good column for this week.

Strange Case of a Death in Venice