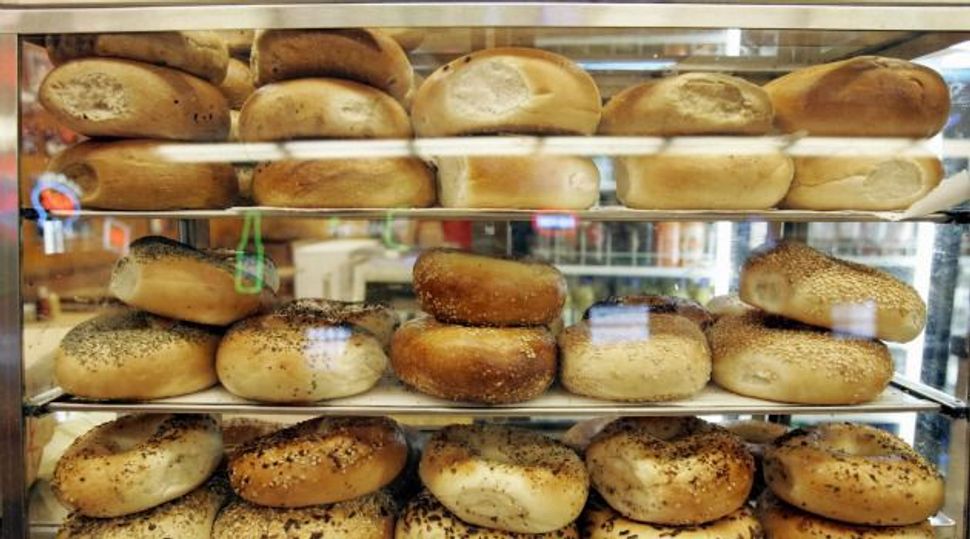 A Fine Distinction: These are bagels. And they have just about nothing to do with the many definitions of bageling. Image by Getty Images

This comes from the Forward’s Naomi Zeveloff:

“Bageling” is a slang word that has taken off in recent years, proliferating geographically and semantically. Presumably this has something to do with the proliferation of the bagel itself, a food that was once, until 50 or so years ago, a distinctively Jewish one of exacting requirements: the classic Jewish bagel has a hard, smooth, glossy, light-brown exterior and a white, plain-tasting, jaw-achingly tough-to-chew interior.

Today, of course, what passes for a bagel can be practically anything as long as it has a hole in the middle (a lumpy-crusted cakey crumb bagel, for example, or an effortlessly masticated honey whole-wheat bagel, or a spinach-and-cheese bagel flavored like a quiche), and the verb “to bagel,” it would seem, can mean practically anything, too — especially if it’s something weird. This includes:

You might, for example, bagel someone by suddenly clapping your hand to your cheek, as if you had just remembered something distressing, and saying, “Oy vey!” The bageled person might then say: A) “Oy vey is right — you don’t know what happened to me today” (mission accomplished); B) “Excuse me, but what did you say?” (To which you might answer, “Oh, I was just trying to remember the name of my mother-in-law’s dentist.”); C) nothing at all. Answer C would not definitely establish, of course, that you’re not talking to a Jew, but it would be a pretty good indication that if you are, he or she doesn’t think it’s any of your business.

Simply stepping up to people on the street and asking them if they’re Jewish, as Chabad mitzvah peddlers often do, is thus not bageling at all in the true sense of the word. It’s far too direct, as was the Jew on the subway who stared and stared at the black man reading a Yiddish paper opposite him until he finally asked, “Mister, zayt mir moykhl, ober zayt ir a yid?” (“Excuse me, mister, but are you Jewish?”)

Without looking up from his paper, so goes the joke, the man replied: “Vos far a shayle iz dos? Aza a meshugener bin ikh nisht.” (“What kind of a question is that? That crazy I’m not.”)

Where does the last meaning of “to bagel” come from? Probably from “a bagel” being used disparagingly for a Jew, a never very widespread slang term going back at least to the 1950s. As those were days in which no one but Jews ate bagels, the term was not an inappropriate one, and “to bagel” would have arisen to mean doing or saying something that only other Jews would do or say, too.

The problem, from a linguistic point of view, is to explain why an old slang word that was used by non-Jews and went out of circulation decades ago should suddenly have resurfaced in the language of Jews. Or was it there all the time without being noticed? If any of you remember hearing or using “to bagel” in Meaning 7 before, say, the year 2000, I’d be interested in knowing.