How Tevye’s Author Got an Oklahoma Oilfield Named After Him 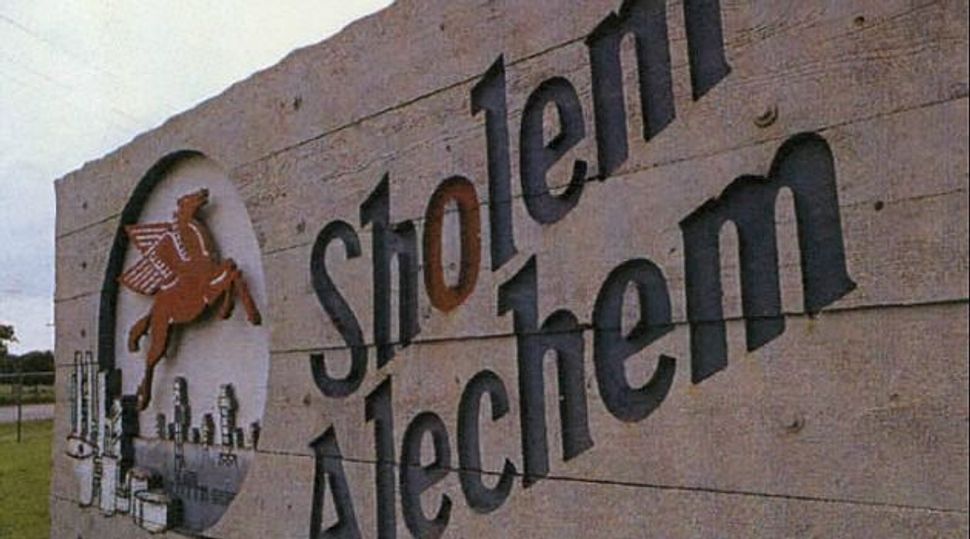 The name of an oil field several miles out of Ardmore, Okla., is a puzzle to local residents. Some believe that it must commemorate a Native American site. After all, Oklahoma was once Indian Territory, and it is still flush with Native American reservations and local names, from Shawnee Twin Lakes to Muskogee. But this particular title, while its roots are certainly tribal, is distinctly non-native. Just ask anyone at your local synagogue: “Sholem Alechem” is certifiably Hebraic.

“The general community thought Sholem Alechem was in the Chickasaw language,” said Coleman Robison, who grew up in the Ardmore Jewish community. The Chickasaws had, in the 1830s, been forcibly removed from the southeastern U.S. to southern Oklahoma, the area Ardmore would later occupy. “I don’t know if [Jewish Ardmoreites] smiled and corrected them or just stayed quiet.”

Though there wasn’t anything Chickasawan about Sholem Alechem, the name did have diasporic origins. Newspapers from the 1920s trace the oil field’s name to a local Jewish newsman, William Krohn. Born in New York to Polish immigrants, Krohn headed out west in the late 1910s to chase the oil boom. Once in town he took over as editor of the local paper, the Daily Ardmoreite, and became extremely popular with the area’s oilmen, whom he would cheerfully greet, according to Ardmore lore, with a throwback to the old country, “Sholem Alechem!”

If any rigger failed to understand the phrase, Krohn would buy the man a raspberry soda and launch into a philological lesson on the spot, according to Frank Gouin, a contemporary of Krohn. As a 1924 account in National Petroleum News put it, Krohn’s “salutation of visiting oil men through the use of these mystifying words resulted in its becoming a usual greeting throughout the oil fields of southern Oklahoma.”

“According to [Krohn’s] statement, which so far has not been disputed, Sholom Alechem is Hebrew for ‘Peace be with you,’” the paper reported. “The reply is Alechem Sholom, which, in modern American, means ‘the same back at you.’”

“[Krohn] was a classic booster,” said Stuart Rockoff, director of the history department at the Goldring/Woldenberg Institute of Southern Jewish Life, referring to a term for those who promoted the booming West to Easterners. Krohn joined a small Jewish community in Ardmore, home of the first synagogue in Oklahoma.

“Jews were among the crucial pioneers in the area,” said Rockoff, and as such were able to make a comfortable niche for themselves in the absence of a local anti-Semitic old guard.

Krohn was a big success in Ardmore, especially among local drillers. When they formed an oil fraternity in 1922, they named it Sholom Alechem International and elected Krohn as its “grand crown block,” or president. Like many other fraternal societies popular in the 19th and early 20th centuries, such as the Freemasons and the Knights of the Maccabees, Sholom Alechem International gave its members an all-male social outlet away from work, women and religion — and shrouded in absurd ritual. The officer under the “grand crown block” was known as the “slush pit,” and alongside him was the “rock hound,” the “headache post” and, tellingly, the “shyster.”

In spite of the tongue-in-cheek nature of the group, one of its membership requirements is a grim reminder of American culture in the early 20th century. National Petroleum News explained that the name Sholom Alechem International had “no religious or racial significance,” but then blithely reported that the group explicitly permitted only white men in its ranks.

The group swelled in size — only two years after its founding over 300 members attended its ceremonial banquet — and became an important community organization in an area with an exploding population.

There are conflicting accounts of how exactly the name got transmitted from the society to the oil field, but the most reliable suggest that the proximate cause was a story in Krohn’s Daily Ardmoreite. In December 1923, Krohn celebrated a rig close to town that had finally struck it big, and oilmen knew that the spot could have no other name than Sholem Alechem.

The field, and others nearby, made Ardmore a boomtown in the 1920s through the middle of the century; nearly 5 million barrels of oil were pumped out of Sholem Alechem in 1948, making it the second most productive field in the state.

Though its production slowed after the middle of the century, Sholem Alechem has seen a resurgence with the advent of fracking, as Chesapeake Energy, acquired major leases in the area in the late ’90s, and energy giant Continental Resources has come to see the region as key to its future. Recently, Citation Oil and Gas finished drilling a new well in in the field, proving that the biblical greeting still inspires hope, at least in the Midwest.

The Jewish community of Ardmore has fared less well. Growing throughout the first half of the 20th century, the community finished construction on a temple in 1952 and hired a full-time rabbi soon thereafter. At its peak, there were more than 35 member families. But the rabbi left for New York only six years after joining, and since then Jewish life in Ardmore has faded.

“There’s only four of us,” said Lynda Galoob, one of the last Jewish residents of Ardmore. She noted that, while the temple was gone, their cemetery was kept in good condition.

Today, for the Jews of Ardmore, Sholem Alechem is starting to sound less like a greeting and more like a long goodbye.

A former Forward fellow, Doni Bloomfield is completing his Bachelor of Arts in history at the University of Chicago.

How Tevye’s Author Got an Oklahoma Oilfield Named After Him