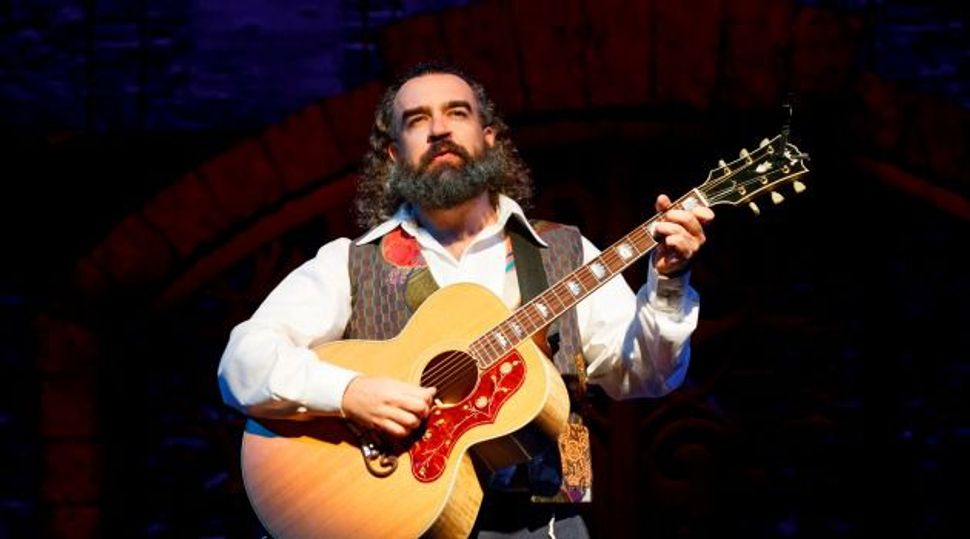 Soul in Transition: Eric Anderson starred on Broadway as Shlomo Carlebach in the musical ?Soul Doctor.? Image by Carol Rosegg

Jews of all stripes surfaced on stage this past season, starting with appearances in four notable bio-dramas: “Soul Doctor,” the musical about the rock star Rabbi Shlomo Carlebach; Joe Gilford’s “Finks,” loosely based on the experience of his blacklisted parents, Jack and Madeline Lee Gilford; and two solo shows, “I’ll Eat You Last, a Chat with Sue Mengers” and “Becoming Dr. Ruth” — focusing on, respectively, the high-powered, weed-smoking and very witty Hollywood agent (played by Bette Midler) and the groundbreaking sex therapist Dr. Ruth Westheimer. Checking out the image of Jews — or, indeed, anyone else — in a production inspired by real people is meaningless if the accuracy of the portrait is up for debate. Ironically, it’s a work of fiction that can often serve as a better barometer.

Consider Aaron Posner’s “My Name is Asher Lev,” adapted from Chaim Potok’s 1972 novel, which had an extended run at the Westside Theater. Set in 1950s Hasidic Brooklyn, it tells an archetypical story of a young man who wants to become a painter — much to the chagrin of his father, a traditional, deeply religious Jew. This play could easily have felt stale and even appealed to stereotypic images of Jews. The issues were clearly of a distant time and place, but the father-son battle continues to resonate. There are no villains.

Jennifer Maisel’s “The Last Seder,” mounted briefly at Theater Three, depicts a wholly contemporary Jewish family made up of grown daughters who each cleave to a different alternative lifestyle. There’s a lesbian with a pregnant partner, a self-centered, commitment-shy lawyer, and an alienated, artistic daughter who picks up a stranger at the train station and brings him home for a family Seder. The youngest is a free-spirited girl who, while living at the family home, strikes up an affair with the good-hearted African-American kid next door.

The family in Joshua Harmon’s “Bad Jews” isn’t nearly so open-minded. The abrasive protagonist of this Roundabout Theatre production is a zealot who is quick to ferret out self-loathing in anyone who is not as committed to Judaism as she is, most pointedly a first cousin who has missed their grandfather’s funeral for a ski trip only to later resurface with a daffy, gentile girlfriend. The immediate conflict between the two cousins centers on which one is more entitled to the grandfather’s Chai, a piece of jewelry that has meaning because he had it with him in a concentration camp. The arguing grows virulent with the young woman using her devotion to Jewishness as a smokescreen for a host of personal frustrations. The play also hints at the competitiveness among the grandchildren as to who identifies most fully with a Holocaust survivor as if it’s a badge of honor.

The Holocaust also casts a long shadow in Jesse Eisenberg’s “The Revisionist,” which starred Vanessa Redgrave as an aging Jewish Polish Holocaust survivor (still living in Poland) and Eisenberg as the young, self-absorbed, pot addicted American cousin who has come to visit her in Poland while revising a sci-fi novel he has written. Puzzling premise aside, Eisenberg’s play (produced by the Rattlestick’s Playwrights Theater) offers a complex portrait of a Holocaust survivor who, having lost her entire family, has assumed the identity of a deceased woman in order to claim a relationship with an American family she’s never met. The entitled David (Eisenberg) is at best vaguely curious about her past; his apparent lack of interest reflects a tendency among some contemporary American Jews to hold the Holocaust at arm’s length. He’s not an appealing figure — but, in the end, neither is she.

Donald Margulies navigated Holocaust terrain in a revival of his often-overlooked play “The Model Apartment,” a dark and surreal comedy about aging Holocaust survivors whose inability to deal with their own tortured history has shaped their grown daughter’s troubled life. Produced by Primary Stages, the work is devoid of sentiment but never disrespectful as it depicts a dysfunctional family suffering from distorted memories. It is a thought-provoking play about the nature of legacy.

In an interview with the Forward, Margulies said he believed the current zeitgeist was right for the play. Perhaps it’s taken three decades for audiences to accept a postmodern take on the Holocaust, he speculated, suggesting Quentin Tarantino’s “Inglorious Basterds” and Art Spiegelman’s “Maus” paved the way for a work that might have had at one time seemed untouchable.

Well-heeled and educated Jews who celebrate Christmas were surely recognizable in Manhattan Theatre Club’s production of Richard Greenberg’s “The Assembled Parties,” though Julie (Jessica Hecht), the hostess, is an unfamiliar Jewish — or, for that matter, gentile — character, at times channeling a Blanche Dubois-esque self-deluder who is soft-spoken and gracious and uses the word “lovely” to define virtually everything. Far more familiar is the economic and emotional disintegration of the insular family over 20 years.

Supporting characters — Mark Blum as a sleazy, petty criminal, Judith Light as an opinionated spouse — that could have become Jewish caricatures instead revealed unexpected depth. But the most interesting character was Jeff (played by Jeremy Shamos), Julie’s long-term loyal friend whom he has loved more than two decades without any reciprocity on her part. In fact, he has never told her how he feels. The fact that he is Jewish is almost irrelevant. But to say he is a character who coincidentally happens to be Jewish is too easy. Not unlike the other fictional creations on stage, he is unwittingly defined by his Jewish background, but through a 21st-century lens — he is a Jew in transition.